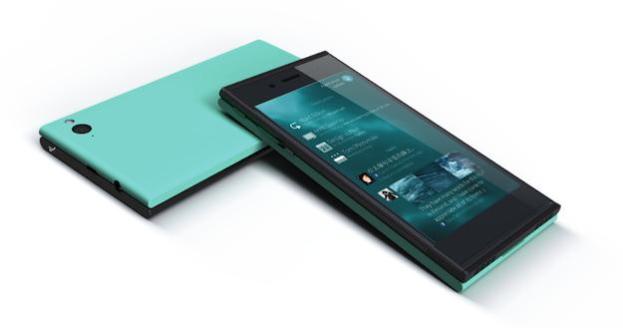 Jolla, the Finnish startup breathing new life into MeeGo, has announced its first smartphone, named the, um, Jolla. The company has been heavily promoting today’s launch event – primarily using the hashtag #JollaLoveDay – on Twitter and Facebook, and it will be holding a media event later today, where we expect to hear more about the phone, the software, and the company’s plans.

In the meantime, we’ve been given a good look at the device and its specifications, plus information on pre-orders and its price. The Jolla phone has a 4.5-inch touchscreen, but the resolution is unknown, however we’d not be surprised to see it being the same as the Nokia Lumia 920 at 1280 x 768. A dual-core processor will power the device, although it’s not stated which chip this will be, and there is an 8-megapixel camera on the rear panel.

It’s this rear panel Jolla was talking about in its teaser video, and sadly not a QWERTY keyboard, as it can be removed and swapped for one of a different color. The clever part here, is that the operating system changes its base color, along with everything from fonts to ringtones, to those which match that of your new Other Half. Underneath the rear panel is a removable battery – an unusual addition on a modern smartphone.

Inside the Jolla has 16GB of user memory, plus a microSD card slot, and the device is expected to connect to 4G networks. The real draw of the Jolla phone is its Sailfish OS, which has evolved from MeeGo, the operating system abandoned by Nokia in 2011. So far, we’ve only had a short preview of the gesture-intensive software, so we’re hoping to see more during today’s event.

If you’re excited about Jolla and Sailfish OS, you can pre-order the phone today from Jolla itself. The phone has been priced at 400 euros, which is around $500, and is expected to be released closer to the end of the year. An early rumor suggested we’d see a Kickstarter-like pre-order campaign, and sure enough it is something a little different. Anyone can register and receive a personal pre-order number to buy one of the first Jolla phones on sale, but if you spend 40 euros ($50), then you get a priority pre-order number for a limited edition phone, and a special Jolla t-shirt. Shell out 100 euros ($130), and you’ll get the limited edition phone, one Other Half rear cover, and the t-shirt; but this is only for European customers.

Initially, Jolla is targeting Finland, Sweden, Denmark, Germany, Spain, France, Italy and the UK, but is opening up the 40 euro and zero cost options to the world, so if you don’t live in any of those countries but would like a phone, make an order and Jolla will consider adding it to the list. While the U.S. isn’t mentioned, an extensive European release is good news; as early on, it looked like Jolla would only be releasing the phone in Finland and China.

Finally, Jolla’s pre-orders are in limited supply, so if you want to among the first to own the phone, then it would be best not to hang around. We’ll bring you more news on Jolla during the event later today.

Updated on 05/27/2013 at 06:30am by Andy: In addition to the details laid out above, GSMArena.com has confirmed some more of the Jolla’s features. It has a 3G/4G LTE radio, Wi-Fi b/g/n connectivity, Bluetooth 3.0 and NFC, plus the 8-megapixel camera has autofocus, face recognition, an LED flash, and can record 1080p video at 30fps. There’s also a video call camera lens above the screen. As for the processor type and the screen resolution, both these are still unknown, mainly because Jolla isn’t sure itself. Jolla told Pocketnow.com it would provide the final details closer to the phone’s release, as it’s still in the process of choosing supply partners, however it is committed to the 4.5-inch screen size and dual-core chip.

Video-editing app LumaFusion to get a Galaxy Tab S8 launch
iOS 16: Everything you need to know about 2022’s big iPhone update
The best gaming smartphones for 2022
I desperately want a foldable iPhone, but iOS still isn’t ready for it
Where to pre-order the Samsung Galaxy Z Fold 4: best launch deal
The OG App, an ad-free Instagram client, is no longer on the App Store
The best phones for 2022: Which smartphone should you buy?
Best period-tracking apps for Android and iOS
Best Apple deals and sales for October 2022
Best Buy is having a giant Samsung Galaxy Tab sale today
Sensor breakthrough brings us closer to blood glucose monitoring on wearables
Does the iPhone 14 have the Dynamic Island?
Best Samsung Galaxy Tab deals for October 2022