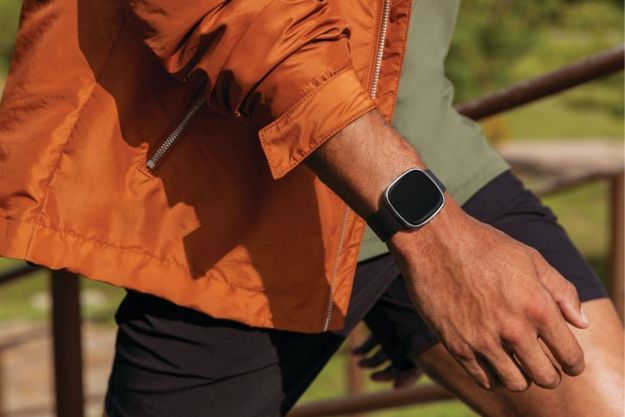 “The Fitbit Sense provides detailed health-tracking information in a small package that's perfect for those with smaller wrists.”

Fitbit is one of the most well-known names in the fitness-tracking business, and for good reason: It combines a brilliant UI and attractive design to appeal to a wide range of people. The Fitbit Sense is no exception. It’s range of features and top-notch sleep tracking make it an easy choice for someone looking for a smart fitness watch at a lower price point than something like a Garmin.

The first thing that jumps out about the Fitbit Sense is its design. It has a clean, streamlined build that’s square with rounded edges. It’s not as bulky or gear-like in shape as something like the Garmin Epix, which makes it much more suitable for day-to-day wear, even in more formal environments. Swapping the bands is simple, too.

The back of the Sense is made of metal, which might cause a few problems if you’re allergic. I couldn’t get an answer as to the type of metal, but I did notice a bit of skin irritation after prolonged wear.

One thing to note is that the default band is on the smaller side. If you have larger wrists, you’ll need to trade out the bands for the longer option or it will be too tight (which aside from being uncomfortable can throw off sensor readings.) The latch also annoyed me; it slips through one loop and hooks into a hole on the band, while the excess length slides through a second loop. It wasn’t the easiest to put on or off.

If you have larger wrists, you’ll need to trade out the bands for the longer option or it will be too tight.

While navigating the Fitbit from the watch face is easy, I sometimes found the activation button to be slightly unresponsive, especially when I was sweaty. It also activated by accident on several occasions.

The Fitbit Sense excels at tracking vital information. There are four main areas it focuses on: Minutes in the “zone,” number of steps and floors, miles traveled, and calories burned. It also tracks the amount of time you spend asleep, as well as how much time you spend in each stage of sleep.

The standard watch face shows you the date, time, number of steps, your sleep score, and your current heart rate. There are multiple faces to choose from, and Fitbit can sync up with your phone to display your calendar, incoming texts and calls, and more.

Within the Fitbit app, you can log fluid and calorie intake, set a goal weight, and more. Fitbit reminds you to get up and move, and tries to get you take at least 250 steps each hour.

Fitbit Premium is $10 per month or $80 per year. When you purchase a new device, it comes with a six-month free trial to test it out. The subscription includes content from numerous Fitbit partners, including Popsugar, Aura, and more.

One area where the Fitbit Sense stands out from equivalent Garmin products is in its sleep tracking. While the Garmin struggled to keep up with irregular sleep patterns (especially if I woke up in the middle of the night and go back to sleep), the Fitbit Sense’s automatic detection was much more accurate. It calculates an overall sleep score based on how much I sleep throughout the day. If I only get six hours at night, but take an hour long nap later in the day, it updates the score to reflect that.

With a six-day battery life, I never worried about it running out of charge throughout the day. It only takes a short time to fully charge the Fitbit once it dies.

One of the most useful features is the ability to tap any health metric and get more information on what it means. So many fitness wearables have their own names for each section that it can be hard to keep track, but Fitbit makes it easy to know what you’re looking at.

One of the most useful features is the ability to tap any health metric and get more information on what it means.

For example, “Zone Minutes” is the number of minutes you spent in the Active Zone, or the heart rate range that counts toward exercise. The American Heart Association recommends at least 150 minutes of moderate exercise each week, and the Sense helps you track your progress toward that goal.

If you previously owned a Fitbit, your information is still available. When I activated the Sense and started tracking data, I found information from 2015 and earlier — the last time I wore a Fitbit. Of course, some of the information was lacking (the earlier models didn’t have the same trackers as the ones I wear now).

One final feature to note is that the Fitbit Sense integrates with Alexa and Google Assistant. With a tap of a button, I can give voice commands to my smart assistants from my wrist — a far easier alternative than pulling up the respective apps while on the go.

The Fitbit app includes a Community tab that lets you find a sort of social network for nearly any type of fitness you can think of. It suggests groups based on your activity within the app; for example, it recommended the Sleep Well and Vegetarian groups for me. The Sleep Well group is full of people posting their previous nights’ sleep scores and comparing progress in achieving a good night’s rest, while the Vegetarian group includes pictures of meals and recipe ideas.

You can link your phone’s Contacts with Fitbit to search for any friends who are on the app. You can also individually add people through email or by their username. Keeping in touch with your friends on the app can help keep you motivated.

These can be earned more than once and put on display on your profile.

Trophies are earned by completing challenges against other people. You don’t have to be connected with others to participate; instead, the app compares your progress to everyone else in the challenge. The Daily Showdown Challenge, for example, awards the trophy to whoever walks the most steps in one day in a given time zone.

The Fitbit Sense streamlines vital health tracking into an approachable platform, and its automatic detection makes it perfect for anyone trying to improve their sleep habits. While the interface can seem a little confusing at first, it’s actually easier to navigate that some of the comparable platforms on the market (like Garmin and its two separate apps).

The Fitbit Sense is an appealing choice because it’s so affordable. At just $300, there aren’t a lot of options with the same level of performance. If you want a smartwatch, the Apple Watch Series 7 is $350. The Garmin Lily has a more attractive design that looks the most like an actual watch of any fitness wearable I’ve ever seen, and it’s just $200.

The Fitbit Sense is durable, and the screen hasn’t gotten scratched in the time I’ve used it. I suspect it will last for several years at least of day-to-day use. Fitbit offers a 45-day money-back guarantee for all purchases from its website, and the Sense comes with a one-year limited warranty in case something does happen.

Yes. At $300, the detailed health and sleep tracking can’t be beat. It’s a far more affordable option than many fitness trackers on the market, and the social community aspect means you’ll have workout partners from around the globe — as well as an attractive watch for daily wear.

How to watch the Aston Villa vs Burnley live stream today