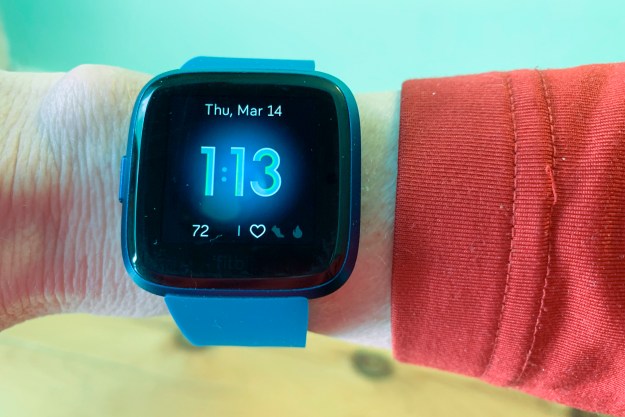 Fitbit’s Versa Lite smartwatch is the company’s most affordable smartwatch to date, but this low price comes with some strings attached. To keep it affordable, Fitbit trimmed several features it bundled in its popular Versa smartwatch. Are these missing features a deal breaker? Not quite. The Versa Lite cements itself as the perfect watch for the casual athlete and one of the best smartwatches overall, who doesn’t need all the bells and whistles, but core basics.

The Fitbit Versa Lite keeps the same Apple Watch-esque design of its predecessor, the Fitbit Versa. It has a clean and square look with chamfered edges, and it sits comfortably on the wrist. The 1.34-inch display is a perfect size for both men and women, and the thin casing keeps the watch tucked neatly out of the way so you can take off your coat or change your shirt without it snagging on the watch. The small profile also allows you to wear other jewelry with it.

Fitbit opted to include only one button on the Versa Lite, further adding to its streamlined appearance. The single button is placed on the left side of smartwatch and is raised slightly above the casing. When pressed, the button has a nice click and is very responsive. Because it is the only button on the device, it is going to see significant usage. I didn’t have any issues with it during our testing, though I can’t help but wonder how well it will hold up after a year or two.

The smartwatch ships with two silicone bands — small and large — that accommodate a wide range of wrist sizes. You can easily switch between the two bands to dial in the perfect fit. Don’t like the stock silicone bands? Not a problem, as Fitbit offers additional bands to customize the watch.

The Versa Lite compiles all the fitness stats you need to stay healthy without overwhelming you.

I tested several watch bands and preferred the stock silicone strap during the week so I could go from the workplace to a workout without having to change out the band. On the weekends, I made the quick switch to the leather or metallic band when the occasion called for a more formal appearance.

The Versa Lite has more color options than the Versa or Versa Special Edition. You can choose between  White/Silver aluminum, Lilac/Silver aluminum, Marina Blue or Mulberry. I reviewed the Marina blue model, and the color falls between a royal blue and navy blue. It’s colorful, but not gaudy. The blue color was eye-catching but sometimes clashed with what I was wearing. I do wish Fitbit offered the Versa Lite in black, my favorite color for a watch because it matches most outfits and accessories.

Fitbit’s roots are in fitness tracking, and it shows. The Versa Lite compiles all the fitness stats you need to stay healthy without overwhelming you. On the watch, you can track exercises, heart rate, steps, sleep, and whether you are moving each hour.

Fitbit may have cut the price on the Versa Lite, but it kept the quality of the tracking intact. I found the heart rate monitor, step counting, and sleep tracking to be on par with other smartwatches I’ve tested. That being said, I do miss seeing the number of stairs climbed as that is one feature Fitbit opted to remove to keep the cost of the device low.

The exercise app reflects Fitbit’s commitment to offering choices to the user, but not overwhelming them with so many options, most of which they won’t use. The exercise app lets you choose from seven different activities, and you can customize which exercises appear on this shortcut list and how they are ordered. Fitbit includes 19 of the most common activities including running, weights, interval training, biking, hiking and more. Once you select and start your exercise, you can view your performance metrics on the watch while you work out. The Versa Lite will track distance, heart rate, time, calories burned and more. All this data is synced to the Fitbit app for further analysis.

The Fitbit Versa doesn’t have a dedicated GPS chip but instead uses the GPS on your phone (connected GPS) for route tracking and accurate mileage calculation. I tested the Versa Lite with an iPhone XR while running and hiking on known routes, and the tracking/mileage was dead on. It does mean that you will need to carry your phone with you if you want to track your routes, though.

Fitbit had to make cuts to lower the price on the Versa Lite and music is one area that got the axe. While the original Versa which had onboard music storage, Wi-Fi to sync music tracks, and Bluetooth to connect headphones, the Versa Lite only has music controls that allow you to stop/pause/skip music playing from your phone. It yet again means that you’ll need to bring your phone with you while exercising.

The data from the watch is synced to the Fitbit mobile app, which uses a dashboard interface to provide insight into your health each day. The app also allows you to track your weight, meals, water intake, and your menstrual cycles if you are a woman.

The dashboard is organized into tiles that summarize daily performance. You can tap each tile to view the statistics for previous days and weeks. You also can customize the dashboard to remove the tiles you don’t use and arrange them, so the ones most important to you are at the top.

The Fitbit app encourages you to exercise by providing challenges and communities that you can join. These are useful when you need that extra push or accountability to stick to your workout plan. But don’t expect much more — the Versa supports guided workouts via Fitbit Coach, but the Versa Lite drops this feature.

The Versa Lite connects to Fitbit’s app and clock face repository. Here you can choose a custom watch face that displays the data that you prefer. Choices range from data-rich digital readouts to simple analog faces.

There’s also an app repository that you can use to add new features and functionality to your device. But I found the apps overall to be lacking. There is a good number of apps, but I didn’t find any that were worth installing. The built-in apps and functionality of the device suited my needs.

Unlike a fitness tracker, a smartwatch also has the responsibility of being an extension to your phone. The Versa Lite not only allows you to receive notifications on your wrist, but it also allows full control over which notifications you receive and when you can receive them. You can customize which apps send alerts to your phone in the Fitbit mobile app using on/off toggles. Want Facebook but not Twitter alerts? You got it.

The Today View brings the best features of the dashboard in the Fitbit mobile app to your wrist.

The interaction between the watch and phone is seamless. Whenever I heard a notification on my phone, I looked at my wrist and the alert was already there. You can view just the first few lines of an alert or tap on it to read more of the message. It’s easy to clear the notifications directly on the watch, and if you have an Android device, you can even use pre-set quick replies to respond to messages. When you clear a notification on your watch, it also clears it on your phone, which is incredibly efficient.

By far, my favorite feature is the Today View on the Versa Lite, which is shown when you swipe up on the clock face. The Today View brings the best features of the dashboard in the Fitbit mobile app to your wrist. You can view steps, heart rate, sleep, and exercise details without having to pick up your phone.

Each of these parameters is neatly organized into tiles that you can remove or arrange to suit your needs. You also can swipe left or right on select tiles to view more detailed information on that health metric.

The Fitbit Versa Lite costs $160, and it’s available for order on Fitbit’s website and at retailers such as Best Buy, Amazon, Target, and more.

Fitbit offers a 45-day money back guarantee and a one-year limited warranty, which covers manufacturer defects.

The Fitbit Versa targets fitness-oriented folks who want more than a basic fitness band, but don’t want to spend a lot of money on a smartwatch. The Versa Lite nails this market with an affordable price tag, and a feature set that is robust enough for everyone except the hard-core athlete.

If you’re hoping to find a discount, you should take a look at the best Fitbit deals and the best smartwatch deals available now.

The Versa Lite offers an outstanding value for those in the market for a new smartwatch other than the Fitbit Versa 3 or Fitbit Versa 2. If you don’t mind paying a bit more, the original Versa is a solid alternative to the Lite Edition. The Versa has the same core features of the Versa Lite but adds back music storage, stair tracking, Fitbit Coach and more. Check out our best smartwatches guide for more options.

The Versa Lite is solidly constructed, water-resistant and feels durable, so we expect it to last for at least two years (if not more). The only questionable part is the button. Unlike the original Versa which has three buttons, the Versa Lite has a single button that is used frequently when navigating through the device’s menu system.  How long will it last? We honestly don’t know. We had zero issues with it during testing, but if there is going to a failure point down the road, we expect it to be the button.

Fitbit has one of the most consumer-friendly interfaces and we hope the company continues to develop its mobile app, third-party apps, and clock face repository to keep up with the competition.

Yes, you should buy the Fitbit Versa Lite if you want the smart features of a smartwatch, but don’t want to spend a lot of money.

Video-editing app LumaFusion to get a Galaxy Tab S8 launch
The best Android apps for December 2022
The best iPhone apps to download in December 2022
The best Samsung Galaxy Watch faces for style and utility
Spotify Wrapped 2022: what it is and how to view it
Fitbit Cyber Monday Deals: Save on Sense 2, Charge 5, and Versa 2
Apple Cyber Monday Deals: Apple Watch, AirPods, iPad, MacBook
Get these JBL earbuds and 4 months of Music Unlimited for $25
OnePlus’ new Android update policy matches Samsung, shames Google
How Apple can fix iOS 16’s messy lock screen customization in iOS 17
The best voice-changing apps for Android and iOS
Save $225 on the unlocked Samsung Galaxy S22 Ultra with this deal
Samsung Galaxy Z Fold 4 is $350 off — no trade-in needed