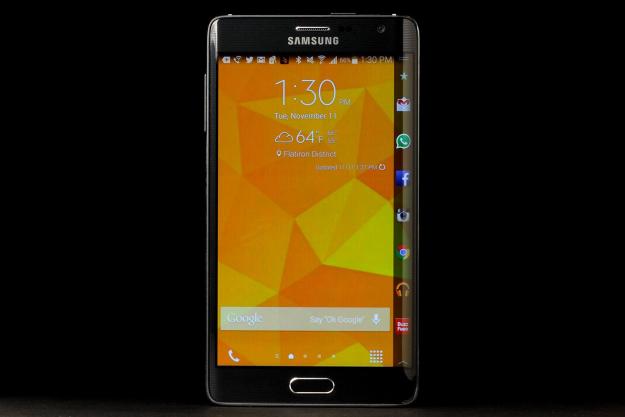 “The Galaxy Note Edge is the perfect phone for multitaskers and social-media addicts who just can’t get enough of the latest info.”

Samsung first turned the world on its ear when it first introduced the mammoth Galaxy Note back in 2011. Though mocked at first, the Note series sold, and now everyone from HTC and Nokia to Apple is making phablets, and phones are almost never smaller than 4.7 inches.

Although Samsung recently expanded the lineup with the Note 4 this past September, the company is also bending its horizons with another new and risky innovation: the Galaxy Note Edge, a phone with a screen that literally spills over onto its side.

The first time I saw the Galaxy Note Edge, I thought it was cool, but couldn’t really imagine why it’d be useful. Most dismissed it as a gimmick, but others raved about it. After living on the Edge for a few days, I realized that Samsung has struck gold again.

An extra bit of flair

Just like the recently released Note 4, the Note Edge has a Super AMOLED screen with a Quad HD resolution of 2,560 x 1,440 pixels. It’s slightly smaller, coming in at 5.6 inches instead of 5.7 inches, even with the added edge. As such, the pixel density is a tad higher and the extra curved edge adds 160 pixels to the width. Overall, the Note Edge has a fantastic screen, though pixel purists will quibble that the colors are oversaturated.

The Note Edge has an aluminum metal frame just like the Note 4, but it’s coated with magnesium. That makes it feel more plasticky, but it’s also grippier, which is definitely a good thing when you’re trying to hold on to such a large phone. I liked the way the curved edges felt in my hand, but I was always conscious of trying not to curl my fingers around the edge and accidentally touch one of the apps located on the panel.

Livin’ on the edge

The edge gives you quick access to all of your favorite apps, and is fully customizable. All I had to do was tap on the star icon to access all my apps and choose which ones I wanted to have quick access to at all times. I added WhatsApp, Facebook, Twitter, Gmail, and loads of other apps; it shows seven at a time, but you can scroll through to see more.

The Galaxy Note Edge is the perfect phone for multitaskers and social-media addicts who just can’t get enough of the latest info.

Samsung offers a few special edge apps, including a ticker tape of Twitter trending topics, Yahoo news, calendar alerts, and more. There are even two games: a basic memory-matching game and a burger-building game called Tiny Burger. Your options are pretty limited right now, but the company says it’s working with third-party developers to add more soon. The edge displays a customized message before you unlock the phone (mine says, “Digital Trends rules!”). Samsung also put some app controls for the camera, S-Note, and other apps on the edge to free up the screen for content.

Like any first-generation device, the Edge suffers from a lack of developer support, so there aren’t many apps to transform the edge banner. However, the ones that do are functional, if not always beautiful. For example, you can tap any topic or article in the Twitter trending topics and Yahoo news ticker tape edge panels and you’re sent directly to that page in the Twitter or Yahoo app.

Samsung’s own panels, like the calendar alerts and so-called “briefing panel” are more appealing and practical. You can edit your briefing panel to show only the notifications and information that you want to have access to at all times. It’ll show your weather, email, Facebook, Twitter, and other app notifications, so you never miss a thing. Samsung lets you rearrange your panels in the dedicated edge settings menu, which is accessible when you drag up on the arrow at the bottom of the edge.

You can also access key tools like the flashlight, recorder, and timer quickly by pulling down the blue tool panel from the top of the edge. At night, the edge serves as a dim clock, so you don’t have to check the time when you roll over at 4 a.m. convinced that it’s 6:30 and time to get up.

The coolest thing about the edge might be the way it facilitates multitasking.

The coolest thing about the edge might be the way it facilitates multitasking. I can read an article and check to see if I’ve got any notifications from my favorite apps — like Facebook, Twitter, Gmail, or what have you – with a single flick of the edge. When I want to get back to my article, I simply tap on the text and the edge disappears. Or, if the notification is important, I can tap on the app to quickly launch it and see what’s up. Then, it’s just a tap of the back button and I’m back to reading. This was particularly useful whenever I was in a rush, because I didn’t have to stop and search for the other app icon – I just had to look to the edge.

The Galaxy Note Edge is the perfect phone for multitaskers and social-media addicts who just can’t get enough of the latest info. Like many of Samsung’s products, the Note Edge is about getting things done and handling distractions efficiently.

The edge can also be used to house controls for apps like the camera and the S-Pen, but it annoyed me in both apps, as my palm kept bumping into the edge and activating the wrong controls.

If you’re a leftie, the placement of the edge on the right-hand side could pose a huge problem. When I held the phone in my left hand, my palm bumped into the edge and triggered buttons accidentally, making it more of a liability than a tool.

Same high-end specs as the Note 4

Unique screen aside, the Note Edge has almost all the same specifications as the Note 4. It’s powered by the same 2.7GHz quad-core Snapdragon 801 processor from Qualcomm and 3GB of RAM. Samsung packed 32GB of storage into the device, which you can expand with a MicroSD card up to 128GB. Like the Note 4, the Edge has a heart-rate monitor, fingerprint sensor, and S-Pen.

For a risky experiment, the Galaxy Note Edge sure is expensive.

In benchmark tests, the Note Edge proved to be a touch slower than the standard Note 4. It managed a score of 24,898 in the Quadrant benchmark, which fell just below the Note 4’s score of 25,781. The 3D Mark Ice Storm Unlimited test yielded similar results, with the Edge coming in at 19,951 and the Note 4 hitting 20,667.

However, in the real world, I had no problems with the Note Edge. The phone was fast and never lagged, Full HD videos loaded quickly and streamed smoothly, and it handled everyday actions without a hitch. It’s possible that the extra edge may have thrown off the benchmark results, and even so, the Note Edge performed like a top-tier phone should.

Decent camera, but it’s no iPhone 6 Plus

The Note Edge has the same 16-megapixel back camera and 3.7-megapixel front-facing camera as the Note 4. It takes great photos and balances light fairly well, capturing sharp details even at night. Colors aren’t always accurate and can seem oversaturated or bleached out occasionally, but typically, the Note Edge takes great pictures. Coming from using an iPhone 6 Plus for a few weeks, the difference in quality was there, though subtle.

The camera controls are placed on the edge of the device, which can either be excellent, or a damn nuisance. If you’re holding the phone just right, it’s wonderful, because the image you’re shooting takes up the whole field of view on the screen. But the Note Edge is big and somewhat cumbersome – especially when taking photographs, so I had to hold it in two hands to take pictures in landscape. To avoid the controls along the edge, I had to move my hand, but then I often covered part of the camera. I had to readjust my grip multiple times to get it just right and finally take the picture. After a few days of using the phone, I got used to it – mostly – but having the controls on the edge was more of a nuisance than anything.

For some mysterious reason, Samsung gave the Note Edge a smaller, 3,000mAh battery. It seems likely that the company was forced to go with a smaller juice pack because of the addition of the edge, and luckily, it’s not that much smaller. I didn’t notice a huge difference in battery life and managed to get through a full day on a charge.

The Note Edge can juice up from zero to 50 percent in only 30 minutes, too, so even if you’re running low, 30 minutes of wall hugging will set you straight again.

The Galaxy Note Edge may not be the perfect realization of Samsung’s latest experiment, but it’s definitely an idea to pursue in the future. As more apps are customized to suit the edge, it’ll become more useful. Right now, it is a great idea that just needs better implementation. As a phone, the Note Edge is every inch the equal of the flagship Galaxy Note 4 phablet.

It’s also nearly identical in terms of specs and design language, so it’s hard to justify the huge price jump. At $400 on a two-year contract and $950 unsubsidized, the Note Edge is one of the most expensive smartphones you can buy. Even the iPhone 6 Plus with 64GB of storage is cheaper than the 32GB Note Edge. The price is insane and beyond the reach of most mere mortals. For a risky experiment, the Galaxy Note Edge sure is expensive.

Otherwise, the Note Edge is a great phone with an intriguing, quirky, new feature. The edge is certainly a cool tool and something we expect to see Samsung experiment with more in the future, but we’re not sure that it justifies the high price tag. If you want to live on the bleeding edge (no pun intended) and are a multitasking fiend, it doesn’t get much better than the Samsung Galaxy Note Edge. Still, we’d wait for the price to drop and more apps to join in on Samsung’s next mad adventure.