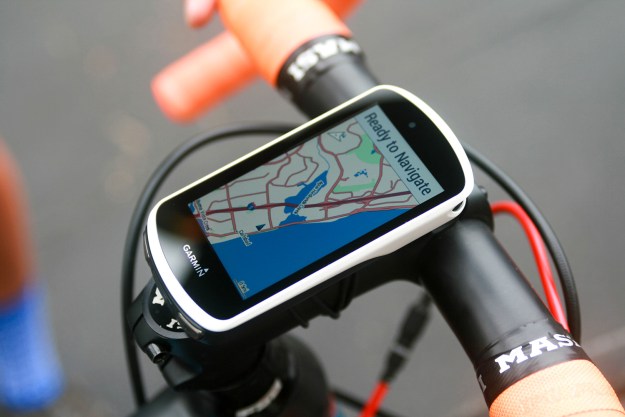 “Those who demand the latest and greatest cycling equipment shouldn’t miss the Edge 1030.”

In keeping with Garmin’s penchant for packing more and more features into each iteration of its GPS devices comes the new Edge 1030 cycling computer — a connected dashboard for bicycles that’s as big on features as it is on size.

The Garmin Edge 1030 has a futuristically smooth, black and white polymer case that’s aerodynamic, attractive, and water resistant to 1 ATM. At 2.3 by 4.5 inches and 123 grams, the 1030 is near twice the size (and more than double the weight) of its smaller sibling, the Edge 520. Interacting with the 1030 is done through a 3.5-inch color LCD touch screen and three side buttons — one on the upper left edge and two on the bottom edge.

Loaded with sensors, the Edge 1030 includes onboard GPS (and GLONASS), a barometric altimeter, thermometer, and accelerometer, plus full-color maps with round-trip route planning, guidance, and point-of-interest search capability even when it’s not paired with a smartphone. The 1030 tracks speed and distance and communicates with cadence, speed, heart rate, and power meter sensors, as well as electronic shifting systems and Garmin’s action cameras via Bluetooth and/or ANT+. When connected to a compatible smartphone, the Edge 1030 delivers on-screen smart notifications including texts and calls and alerts an emergency contact if it detects a crash or accident. It also acts as a dashboard for Garmin’s Varia Smart lights and Rearview Radar.

With all its performance sensors and data recording possibilities, the Edge 1030 has loads of metrics to share.

With all its performance sensors and data recording possibilities, the Edge 1030 has loads of metrics to share. Data nerds can set up the Edge 1030’s data screens however they like. Each screen displays up to 10 points of data while other screens can be added to show in-depth detail, graphs, maps, or even a compass. If the included customizations aren’t enough, more screens, widgets, and apps can be downloaded via Garmin’s Connect IQ store to further personalize the experience — highlights of which include Strava Live Segments, Training Peaks, or even a memory game. Though we don’t recommend playing games on an Edge 1030, it’s nice to know it’s possible.

The Edge 1030 also works to help cyclists on group rides stay in contact via a new feature called GroupTrack. Using GroupTrack, riders can view the locations and speeds of their friends in real time on a map. While in GroupTrack mode, connected riders can trade quick, pre-written text messages (via a connected smartphone) with a few taps on the touchscreen.

The unit we tested arrived with the Edge 1030, a USB cable, two bike mounts (one standard and one out front), a tether (in case the mount fails), and a quick-start manual. The Edge 1030 is also available in a bundle that includes the above, plus cadence and speed sensors, and a heart rate monitor chest strap for $700.

While it is possible to record a ride out of the box, the Edge 1030 works best when paired with a compatible smartphone and Garmin’s free Connect app. After downloading Connect and creating a user profile, we were directed through on-screen instructions to pair the device with our phone. Once paired, the device is added to a list of devices in Connect where it can be further personalized via the app or the Garmin Connect website. Our 1030 immediately notified of a new system update which automatically downloaded and installed. Next step was mounting it on our bike.

The Edge 1030 comes with Garmin’s new in-line, out-front flush mount which puts the unit out in front of the bars where it is easier to see while riding down on the bars, but Garmin also included their standard quarter twist mount for attaching to the stem. We’re not sure how we feel about attaching a $600 computer to our bike with two rubber bands, but we went with it, using the out-front mount on our road bike and the standard mount on our MTB rig.

On our first ride, a friend rolled up next to us, looked over and said, “What is that? A Garmin 3000? It looks as big as a phone.” It’s big, no doubt, but riding with the 1030 is a fairly posh experience thanks to the large, vibrant touchscreen (which works well, even with gloves on). The days of button flogging through a wedding cake of menus to switch bike profiles or get to the right data screen are long gone. The 1030 shows activity profile settings top and center. Getting from one bike setting to another is as easy as tapping an arrow or swiping the screen.

Once the profile is selected it’s nearly impossible to forget to start recording a ride because when the 1030 detects a speed over six miles per hour it chimes repeatedly until the start button is pressed. The 1030 also has an “auto start” feature that begins recording a ride at a preset speed. We found this to work fine for starting rides but unfortunately at the end of the ride, we had a bit of trouble. We like ending our data recordings before we get home and with ride start set to “auto,” the 1030 would immediately begin recording a new ride each time we ended our current ride because it recognized that we were still moving. After starting and deleting three rides on the way home we finally had to turn the autostart function off entirely.

Trusting Trendline may take some time

Garmin’s smart “Trendline” route planning is a great feature for those times when a cyclist is in a new area and doesn’t know where to ride. When we tested it at home, we noticed that while the routes it selected matched our mileage and direction requests, they weren’t necessarily the best, most popular routes in our area. Garmin says the routes are chosen based on “billions of miles” logged on Garmin Connect but it seems there’s still room for improvement before we’d trust it 100 percent on unfamiliar roads.

The automatic function we found most useful was the light-sensitive backlight. It automatically turned on each time we rode through a tunnel, peddled under an overpass, or stayed out after dark. It was reassuring on pre-dawn rides to have a little nightlight on the bars keeping us up-to-speed on our data. The same light sensor also automatically controls Garmin Varia smart lights, if they are installed. It’s little touches like these that make it obvious that Garmin engineers put a lot of thought into this rig.

Notification system leaves something to be desired

With all its connected smart notification features, we still found there to be a few missing pieces and wished it could’ve borrowed a few tricks from Garmin’s Fenix 5 GPS watch — like answering a phone call or switching music that’s playing on a phone during a ride. We’re not big on riding with headphones but for those who are, being able to answer the phone or easily switch songs without moving a hand from the bars would be a nice.

Riding with the 1030 is a posh experience thanks in part to the large, vibrant LED touchscreen

We were looking forward to trying some of the other features, however, using them required clearing way too many technological hurdles. The GroupTrack feature is a perfect example. Knowing the location and speed of everyone on a group ride with a quick glance down at the map is great in concept. So is being able to send them a message. Getting GroupTrack setup to do that, however, required loads of pre-planning.

First, we’d need to connect with other riders in Garmin Connections via Garmin Connect. They would also have to have Garmin Edge devices and Garmin Connect installed on their phone before initiating Live Track in Garmin Connect Mobile. While we wanted to test this feature in the wild, we never found enough willing riders with the proper gear to set it up. For a family — or a team that consistently trains together — it could be a great feature. For now, we’ll just have to wait until more of our friends are interested in the tech before we get to see how it works.

It’s great to see Garmin packing almost every sensor and feature a cyclist might want into one package. The big, beautiful LCD screen and route planning features make navigating rides and viewing performance metrics simple and straightforward, especially for older riders whose eyes are beginning to fade. After riding with this big beauty for over a month, it will be difficult to go back to our tiny monochrome Edge 500 but the truth is, in the time we spent with the Edge 1030, we rarely used most of its bells or whistles. The maps were nice on occasion but for us the Edge 1030’s increased size, weight, and price didn’t seem like an equitable trade.

The Garmin Edge 1030 sits atop the feature heap and it does everything that it does very well. For riders who want the latest and greatest cycling computer that does absolutely everything, there’s no alternative.

Seeing as many of our cycling friends are still riding strong with six-year-old Garmin Edge 500s, we see no reason the Edge 1030 won’t last even longer. With all its built-in sensors, the future seems nearly unlimited. Add the fact Garmin continually updates device software whenever it has a fix or new feature, and this device looks perfectly able to perform well for years to come.

Those who demand the latest and greatest cycling equipment should buy the Edge 1030, but it’s an especially valuable tool for touring cyclists who spend the majority of their time riding new routes in unfamiliar areas. Those who train and race on the same routes day after day, year after year, and analyze their performance data only after they’ve completed their rides will be better off spending half as much on the smaller, lighter Edge 520.