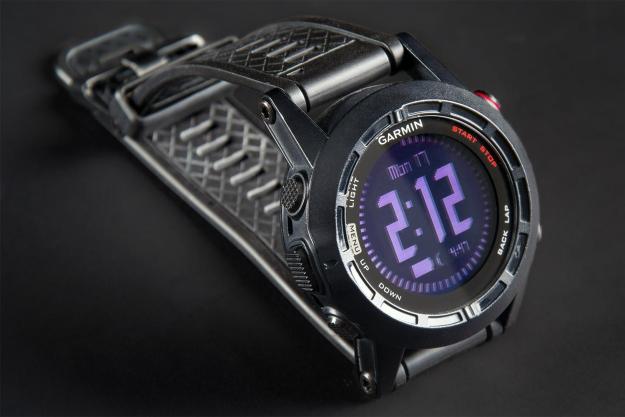 “While its complex interface occasionally tried our patience, Garmin’s versatile fenix 2 kept us coming back to explore everything it can do.”

The recent excitement surrounding the upcoming launch of the Apple Watch has made it easy to forget that GPS giant Garmin has been making some pretty cool “smart” watches for over a decade. Its first GPS-powered Forerunner watches may not have displayed text messages or alerted users to incoming phone calls in high-resolution color, but they were adept at displaying distance and pace, as well as mapping exact routes in detail. More than anything else, those watches helped Garmin learn volumes about what people want when it comes to wearable technology.

Garmin’s fenix 2 represents a decade of that experience distilled down into one new, refined product. Swimmers, runners, cyclists, hunters, hikers, fishermen, climbers, skiers and snowboarders, geocachers, and yes, even skydivers will find something to love in the newest version of this do-everything watch.

When Garmin launched the original fenix watch, we called it “a big, burly, ruggedly handsome watch,” and from the outside, not much has changed. The watch uses a similar round-faced black case with the same 70 × 70 pixel transflective monochrome LCD screen (white on black) and five-button layout. On the inside, however, the fenix 2 is a whole new watch.

In addition to Bluetooth and ANT+ connectivity, the first fenix featured an onboard altimeter, barometer, thermometer, and compass. With the fenix 2, Garmin has added an accelerometer to the mix. This new sensor brings improved features for runners, stroke tracking for swimmers, and the potential for even more developments in the future.

The other big addition is smart notifications. When paired with a compatible Android or iOS device, the fenix 2 can alert users to incoming text messages, emails, and phone calls. It can display the full text of the emails and text message, and show who’s calling. But outside is where it shines.

The fenix 2 can track cross country skiing, downhill skiing, snowboarding, climbing, hiking, navigating, trail running, running, cycling, open-water swimming, pool swimming, gym workouts, and even multisport activities like a triathlon. Each preset transforms the watch like a chameleon into what is essentially a specialized fitness watch for the chosen activity.

It has pretty much all the comforts of a quality, normal watch.

In running mode, the fenix 2 is a powerful training partner for serious runners. When coupled with Garmin’s accelerometer-equipped HRM-Run heart rate strap the fenix 2 can monitor not only distance and pace, but heart rate, cadence, vertical oscillation and ground contact time all without the need for an additional foot pod. It also computes post-run recovery times and a VO2 max estimate, allowing the watch to predict race finishing times.

In swim mode, the watch tracks laps, counts strokes (and identifies them: free, back, breast, or fly), charts distance, and even calculates a swimmer’s SWOLF score (stoke efficiency). In bike mode, cyclists can pair the fenix 2 with ANT+ speed, cadence, and power sensors to provide analysis of a ride with the same level of detail as Garmin’s dedicated Edge cycling computers. For snowboarders and skiers, the fenix 2 will count the number of runs, total vertical feet, and speed as well as a record of the total distance skied.

The watch can also calculate sunrise and sunset times for a given location and provide information to hunters and fishermen regarding what time of day they are most likely to be successful. For hikers, the watch’s navigation functions can help users follow a predetermined route, or simply lead them back to a start point after a wander into the woods, all the while offering metrics like altitude change, distance travelled, and speed. The onboard barometer can even alert users to a potential coming storm.

Surprisingly, Garmin managed to fit all this functionality into one water-resistant watch that weighs only 3 ounces.

We tested the Garmin fenix 2 “Performer Bundle.” It includes the fenix 2 GPS watch, Garmin’s accelerometer equipped HRM-Run heart rate monitor, a USB charging cable, AC adapter, and a fabric strap for the watch (for those times when it works better to wear it on the outside of a jacket). A quick-start manual helps get things started.

While the fenix 2 can be used as a fitness tracking or navigating device without being paired with a smartphone, you’ll want to connect it with one of two smartphone apps: Connect (available for iOS and Android) or Basecamp (available for iOS). Connect is for athletes interested in tracking running, swimming, cycling, and general fitness metrics, while Basecamp is designed for those more interested in adventuring, planning hiking routes, downloading routes, or sharing routes with others.

The fenix 2 can alert users to incoming text messages, emails, and phone calls.

To get access to smart notifications, update performance metrics on the go, or to use Garmin’s Live Tracking feature (that lets friends and family follow your progress online in real time) the watch must first be paired with the Connect app. After downloading it, we quickly paired the watch by following the on-screen prompts. Once set up, the Connect app allowed us to sync activities to our Garmin Connect profile without connecting the watch to a desktop computer. (You can create an account if you don’t already have one.)

After pairing the watch we were ready to dive in, literally. In theory, swimming with the fenix 2 is simple: Select swim, then pool, and press the red start button on the upper right side of the watch. As we learned repeatedly with this complex watch, however, one small mistake during setup can have disastrous consequences on the end results. This happened on our first and second swims, when we entered the wrong pool length. The watch uses this data, along with the built-in accelerometer, to determine the number of laps, stroke, pace, and other metrics. After a 45-minute swim, all our results were botched by this one early error. Lesson learned.

In Open Water swim mode, the fenix 2 uses GPS to keep track of the distance, speed, and times much as it would on a hike, however, it uses the accelerometer to count strokes. We discovered that depending on the stroke we were doing, the fenix 2 would occasionally lose contact with the GPS. For people who train in open water all the time, this could be a major problem. We found the mode more useful for stand-up paddling and surfing. In fact, if the fenix 2 included tide charts in its data mix, it would be one of the best surf watches on the market.

Simple activities like hikes and runs are pretty simple to track, but the watch’s customizable menus and functions make it possible to create some technological monsters, not to mention generating severe bouts of frustration. Getting this watch to do exactly what we wanted, often required tenacity at a rather nerdy level. It often demanded much more time than we think the average person would be interested in spending on a watch. Even so, it turned out to be our favorite GPS tracking device.

We put the fenix 2 through some serious hiking, biking, and cycling adventures. When using full Bluetooth smart notifications the fenix 2’s rechargeable 500 mAh lithium-ion battery lasted between 14 to 24 hours, depending on how fast and furious the notifications were coming in. With Bluetooth turned off and occasional GPS tracking, we got close to 10 days of battery use. With GPS and Bluetooth turned off entirely and the fenix running in watch mode, the battery stayed charged for weeks. We’re not sure exactly how long the battery would last in watch mode because we couldn’t go that long without using all those functions. Charging the battery from dead to full power took less than two hours, so the battery was never an issue.

First and foremost, the fenix 2 is a great watch. It looks good from a distance and up close. It feels solid on the wrist, and presents the time, day, and date on a large easy-to-read digital face. It resists water to 50 meters so we could shower, surf, and swim without worrying about it getting dunked. It has an adjustable backlight and contrast controls, customizable alarms, a stop watch, and pretty much all the comforts of a quality, normal watch.

But then there is everything else. This watch is like a stealth data bomber. It flies under the radar as a normal watch, but has so much more going on behind the face.

Having a stream of data available on your wrist is addictive. Going on a hike and knowing exactly how far we’d gone, what the elevation was, which way was North, and how fast our heart was beating by simply glancing at our wrist was novel at first, but soon became required. Eventually it was difficult to remember how we’d ever hiked, or swam, or run without it. While its complex interface occasionally tried our patience, Garmin’s versatile fenix 2 kept us coming back to explore everything it can do.