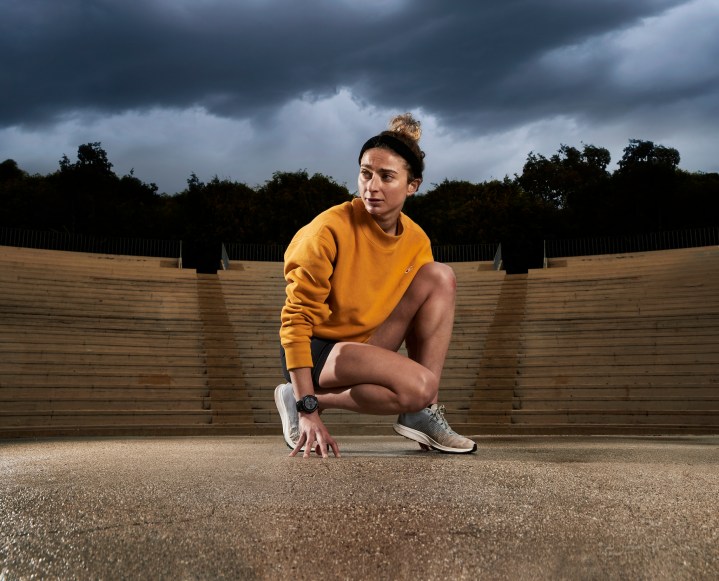 The Forerunner 245 builds upon the success of the Forerunner 235, one of Garmin’s most popular running watches. The new Forerunner 245 hits that sweet spot of having the advanced metrics to keep hard-core runners at peak fitness while being basic enough for those who don’t want to track every single foot strike.

The Forerunner 245 includes a core set of health and wellness features with new stress monitoring and Garmin’s body battery metric which debuted in the Vivosmart 4. The watch includes GPS, an accelerometer and now an onboard pulse oximeter for sleep monitoring and oxygen absorption analysis. Also new to the series are performance monitoring tools like training status, recovery time, Garmin Coach, and the advanced running metrics from Garmin’s running dynamics pod or heart rate strap. The Forerunner 245 does not have a barometric altimeter; you’ll have to bump up to the Forerunner 645 or the 945 for integrated elevation data. Also missing is Garmin Pay, another feature found only on the high-end Forerunner 945.

Though a few features are missing, Garmin makes up for it with its navigation and music. The Forerunner 235 ships with color maps that allow you to view saved courses as well as navigate back to the start when you need to turn around during a run. New in the 245 Music version is support for transferring up to 500 music files and offline syncing to Deezer and Spotify. The Forerunner 245 and 245 Music deliver up to seven days of battery life in smartwatch mode, up to 24 hours in GPS mode and up to six hours in GPS mode with music.

Designed for serious athletes, the Forerunner 945 is the company’s flagship smartwatch and has all the bells and whistles to analyze and improve performance. The smartwatch has all the advanced training metrics of the Forerunner 935 and adds the new training load focus, which allows an athlete to analyze their training load based on the type of activity and its intensity. Also new are a pulse oximeter to measure oxygen absorption and full-color onboard maps that help runners navigate backcountry trails without getting lost. The Forerunner is more than just a running watch. Its multisport modes support a variety of activities including skiing, hiking and golfing. When operating in smartwatch mode, the Forerunner 945 delivers up to two weeks of battery life. Using GPS cuts the battery life to 36 hours while GPS and music together reduce it to 10 hours.

Garmin updated its Connect app to include menstrual cycle data for women. This new feature allows women to track their cycle and plan their training around their bad days and maximize it on their good days. Garmin also expanded its Garmin Coach feature, which provides a coach-driven adaptive training plan that syncs to a Forerunner watch. All five of the new Forerunner watches are compatible with Garmin Coach. Previously only available with a 5K running plan, the latest update expands Garmin Coach to 10K and half-marathon distances.

Video-editing app LumaFusion to get a Galaxy Tab S8 launch
Google Pixel Tablet leak reveals key specs about the mysterious device
Hey look, the iPhone’s Dynamic Island has come to … Android?!?
Apple rolls out iOS 16 update to fix frustrating camera-shake, paste bugs
Pixel Watch design video reveals what Google doesn’t want you to see
How to transfer WhatsApp messages from Android to iPhone
Best cheap Fitbit deals for September 2022
The Uber hack is an outrageous tale of a teen hacking for fun
The best Samsung Galaxy S22 screen protectors for 2022
LG’s doomed Rollable phone appears on video to show us what we missed
How to transfer your SIM and phone number to an iPhone 14
Amazon’s new Fire HD 8 tablets run faster, last longer, and start at $100
Samsung Galaxy S22 buying guide: everything you need to know