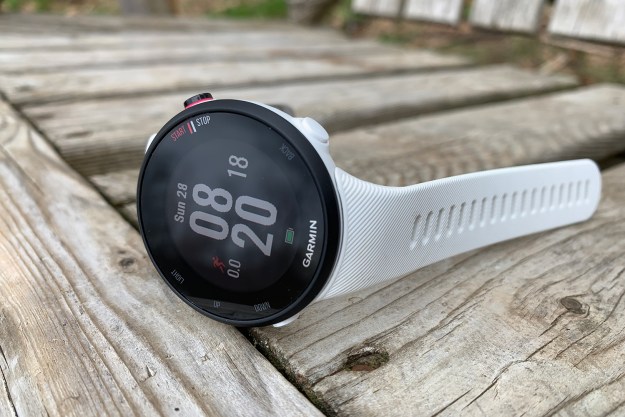 “The Forerunner 45S tracks all the metrics a new runner needs.”

The Forerunner 45 is available in both a small (FR45S) and large size (FR45). Both watches are identical in every way except for the casing and colors. The FR45 measures 42mm and is available in red or black, while the FR45S is 39.5mm with lilac and white color options. I tested the FR45S in white, but everything in the review also applies to the FR45.

The circular, color watch face is a showstopper

The FR45S boasts a 1.04-inch color display that is slightly bigger than the 0.93-inch monotone display of the Forerunner 35. It also has a higher resolution (208 x 208 pixels) than its predecessor (128 x 128 pixels). I had no problem reading the screen during a daytime run or at night using the built-in backlight. The high-resolution screen allowed me to see an array of metrics on the screen, and I appreciated that various metrics were color-coded for clarity.

Garmin uses chemically strengthened glass to cover the display instead of the Gorilla Glass used on other Forerunner models. This choice keeps the price low, but means the FR45S could scratch more easily than Garmin’s other Forerunner models. I have not scratched the watch face yet, but I have only been testing the unit for a few weeks. My older Forerunner 235, which also has chemically strengthened glass, showed some scratches after a few months. The scratches aren’t a functional problem, but consider a screen protector if they’ll bother you.

With a new circular watch face a five-button navigations, the Forerunner 45S finally looks and acts like a Forerunner watch.

This new circular watch face means the Forerunner 45S is slightly wider (39.5mm) and slimmer (11.4mm) than the 35 (35.5mm, 13.3mm). The watch face on the FR45S is an ideal size for small wrists, but it is too small for large wrists. Folks with bigger wrists should purchase the Forerunner 45 which has a 42mm casing and fits wrists up to 197mm. Garmin upgraded the silicone strap on the Forerunner 45S making it slimmer than the Forerunner 35. It’s curved to fit your wrist which can be uncomfortable is your wrist doesn’t quite fit that curve. The watch has a sporty look that fits well with casual attire but looks out of place with formal wear.

The Forerunner 45S has 5-button navigation that’s significantly more user-friendly than the four buttons on the FR35. The FR45S uses that same button layout and user interface as Garmin’s other Forerunner watches. The buttons on the Forerunner 45S are slightly raised from the bezel making them easy to press even through a jacket. The start/stop button is black with a red ring, and is raised more than the other buttons on the watch so you can find it easily even in the middle of a workout. Each button has a label for its function, so it isn’t difficult to figure out what each one does.

There’s plenty of metrics for a new runner

Forerunner 45S is an entry-level sports watch, and it shows. Everything on the watch is geared towards casual runners who want to improve their fitness but don’t want to go overboard crunching numbers. The watch measures all the metrics you need in a running watch including distance, pace, speed, cadence, calories burned and heart rate. New to the FR45S is a V02 max calculation which approximates your cardiovascular fitness level and is found on Garmin’s other Forerunner watches. All these metrics are easy to understand and easy to track. You don’t need a degree in exercise physiology to apply them to your running and make improvements.

The Forerunner 45S has Garmin’s latest heart rate sensor and built-in GPS with GPS, Glonass and Galileo support. The heart rate sensor sits on the back of the casing and is so compact you wouldn’t even know it was there if not for the green LED. The heart rate monitor is top notch, performing comparably to  the other smartwatches and devices I used in testing, including the Garmin 645, Garmin Fenix 5X Plus, Suunto 9, and the Polar H10 chest strap. GPS also was accurate with distance, track, and elevation consistent with Garmin’s other Forerunner watches. GPS lock took between 10 to 30 seconds depending on whether I was out in the open or in a wooded area.

Looking at metrics is helpful, but if you really want to improve your running you need a training plan. Garmin thankfully didn’t skimp in this area, adding training plans to all of its devices including the affordable Forerunner 45S. You can create your own training plan or use those available in Garmin Coach. Along with its new Forerunner watches, Garmin has expanded its Garmin Coach workout assistant beyond the 5K mark and now includes 10K and half-marathon training plans. I have used training plans in the past to go beyond the 5K plateau and I’m thrilled to see this feature land on even Garmin’s beginning running smartwatch.

The Forerunner 45S tracks your health and wellness, a useful complement to the running metrics. The heart rate sensor tracks your heart rate 24/7 allowing you to monitor your resting heart rate and calculate your stress level throughout the day. This information is funneled into Garmin’s new body battery metric, which tracks your overall energy reserves. The Forerunner 45S doesn’t measure your training load, so the body battery is a useful stand-in that allows you to keep your activity level and recovery time in check.

The Forerunner 45S tracks your sleep, and is as accurate as any other smartwatch we have tested.

The Forerunner 45S also tracks your sleep and breaks down your sleep into stages: deep, light, REM and awake. It accurately detected when I fell asleep and when I woke up each morning. It even detects your movement so you can see how much you toss and turn each night. Unlike the Forerunner 245 and 945, there is no pulse oximeter, so you can’t track your oxygen levels overnight.

Garmin’s Forerunner 45S packs a punch with new metrics, improved GPS, and a color display, but all those extras come at a cost. Battery life on the new Forerunner 45S in smartwatch mode tops out at 7 days instead of the 9 days promised by the Forerunner 35. I used the Forerunner 45S for notifications, sleep tracking and running about an hour each day with GPS and had to charge every 4-5 days. That’s not amazing, but it’s long enough that recharging the watch shouldn’t prove annoying.

It’s still made for runners first

Garmin’s Forerunner 45S is a running watch first, and a smartwatch second. It’s primary function as a smartwatch is notifications, which are sent to the watch from your connected mobile phone. Each notification gentles buzzes your wrist and contains both a portion of the incoming alert and the app which sent it. Without opening my phone, I can tell whether I just received an email, a Facebook message, or a Trello alert.

With this information, I can decide if I should take out my phone and respond right away or wait until later. Unfortunately, you cannot make phone calls, activate Siri/Cortana, or even respond to the notifications from the watch on iOS. Android does allow you to respond to text messages, but you can only use preset messages.

The Forerunner 45S is available now for $200 from Garmin, REI, and other online retailers. The 42mm Forerunner 45 also sells for $200 at Garmin, REI and more. Garmin fitness products are warranted to be free from defects in materials or workmanship for one year from the original date of purchase.

If you’re looking for discounted options, you can also go through our list of the best smartwatch deals.

The Garmin Forerunner 45S is a well-rounded fitness smartwatch that tracks all the important metrics the casual and new runner needs.

If you want more than just the basics like distance and pace, then you should consider the Forerunner 245, which costs $100 more and includes both basic and advanced running metrics. If a barometric altimeter is a must-have, then you’ll need to jump up again in the cash department to upgrade to the $400 Forerunner 645 or the $600 Forerunner 945. The 645 has the same core features of the 245 with the addition of an altimeter and a gyroscope, while the 945 is a fitness tracking machine used by serious, number-crunching runners.

The Forerunner 45S is built with the quality I have come to expect from Garmin.  Its biggest weakness is the chemically strengthened glass that is used to cover the display. Unless it is protected by a screen protector, I would expect to see scratching on the display. Still, the watch should remain functional for three to five years.

You should buy the Forerunner 45S if you are run regularly and want to start tracking more than just the basics like pace and distance. Unless you are an elite or really enjoy pouring over metrics, everything you need to analyze your running performance is available in this $200 watch. Runners who care about mountains and dead-on elevation should pass on the Forerunner 45S and look to the Forerunner 645, Forerunner 945 or the Fenix series.