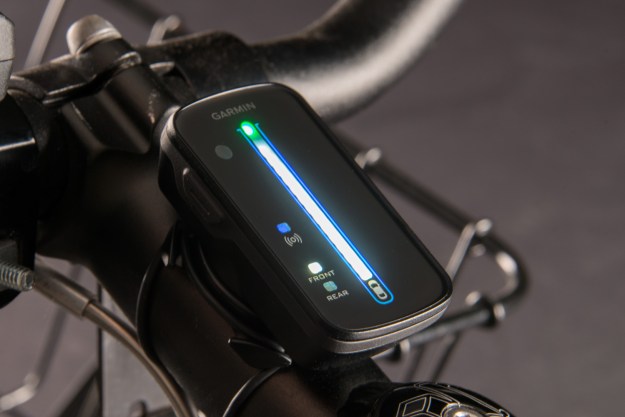 Cyclists are exposed to many hazards when they’re on the road — trash, holes, crosswinds, dogs, other cyclists — but pretty far up the list is “large objects approaching from behind at high rates of speed.” Yes, cars, trucks, busses, and in some scenic locations multi-wheeled farm equipment. Some might suggest that cyclists use rearview mirrors to keep track of what is behind them, like everyone else on the road. But the fact is, road cyclists as a group don’t think mirrors are cool. That’s why you’ll rarely see road racers with a rearview mirror attached to their bike, bars, glasses, or helmet, even though getting hit from behind is one of the most common accidents involving cyclists.

Garmin has used technology to find a work around for mirror adverse cyclists. The Varia Rearview Radar is a tail light equipped with radar that can alert a cyclist to the approach of vehicles from as far back as 150 yards. It’s like a digital rearview mirror minus the mirror. And it could save lives.

The Varia Rearview Radar Tail light bundle is made up of two separate devices: the $200 radar tail light, which attaches to the bike seat post just below the saddle, and the $100 radar display unit, which connects to the stem of the bike near the handle bars. Both pieces are high gloss black and communicate with each other via Garmin’s ANT+ wireless technology. Owners of the Garmin’s Edge 25, 520, or 1000 cycling computers can skip the radar display unit and simply pair the rearview radar with their cycling computer to receive alerts on screen and with an audible beep.

The radar display is about half the size of a Garmin Edge 1000 cycling computer at 2.4 inches tall, 1.3 inches wide and .7 inches thick. The tail light is larger than an average cycling tail light at 2.9 inches wide, 1.7 inches tall and 0.9 thick, but not all that heavy for its size at 63.5 grams. Eight LED lights (which we do wish were slightly brighter) spread horizontally across the light housing.

A pair of parallel vertical lines on the Varia’s display represent the road behind the cyclist. Vehicles (up to five at a time) appear as white dots between the lines, which move to the top of the screen as they approach the rider. An LED up top gives you three signals: green means no vehicles spotted, yellow means a vehicle is in range, red means a vehicle is approaching at a very high rate of speed. As vehicles approach, the tail light reacts by switching from a four-light blink into a full eight-light flash, hopefully alerting the driver to the cyclist’s position on the road.

The bundle we tested includes the radar tail light, the radar display unit with stem mount, a seat-post quarter turn mount, a universal seat-post mount, and a microUSB charging cable.

Setting up the Garmin Varia Rearview Radar on our bicycle was simple thanks to Garmin’s tool-less mounting system. The base straps to the bike’s seat post with a sturdy rubber band, then the light twists onto it with a quarter turn. The display twists onto a base on the handlebar stem the same way, just like Garmin’s bike computers.

The Varia Rearview Radar is one of those refreshing technologies that just work right out of the box. There are no smartphone apps to download or accounts to set up. Just power up the display and radar, and they connect automatically via Garmin’s ANT+.
As we rolled out onto a local four-lane road, the LED light at the top of the radar display turned yellow immediately and little white dots began stacking up below it. We quickly realized that for cyclists who ride in a constant sea of moving vehicles, the information provided by the Varia could seem redundant at times, but it’s still useful to know how close the cars are, and how many are back there.

One disclaimer: You still need to look back to confirm the road is clear before moving out into a lane or changing positions in the bike lane. That said, the radar can save you a head turn. Knowing four cars were behind us gave us the ability to wait until the fourth car had passed before looking back to make sure it was clear.

One reason it’s very important to look back is that some vehicles just don’t show up at all. The rearview radar only tracks objects that are approaching at a speed greater than the cyclist. Vehicles traveling at an equal or slower speed don’t show up. This took a while getting used to. Once, while cruising the beach, we ended up out in the lane because it had been clear. When we turned around to check again, we were surprised to find a car about 15 yards back cruising the same speed we were, which did not show up on the radar display. Another time, a car pulled out from a side street and matched our speed exactly. This car never appeared on the radar, either, nor did bikes that approached slowly.

This does come with some advantages. While riding in a peloton, the bikes behind us didn’t show up on the radar. And unless there were more than four or five riders behind us, they didn’t seem to block the radar from locking on to approaching vehicles. In a larger group, the cyclists behind us blocked vehicles from our radar until they were almost next to us. All of these small anomalies were a reminder that you always have to look back to double check.

Without the Varia we felt like we were riding half blind.

Because the Varia’s blink pattern changes as a vehicle approaches, the tail light also works as a warning signal for cyclists behind you. On one group ride, we had a friend roll up beside us and say, “It works for me, too. When I see it start flashing brighter I know there is a car in back.”

Once the novelty of having radar wore off, we wondered if it was all that necessary. It only took one ride without the rearview radar to realize how much we’d come to depend on knowing what was going on behind us. Without the Varia, we felt like we were riding half blind, and that’s was a terrible feeling.

The Garmin Varia rearview radar is an amazing piece of bicycle technology that increases cyclists’ awareness to what is going on around them — especially for those too cool for mirrors. It helps cyclists ride smarter and safer. There is no reason not to have a blinky light on a bike, especially one with brains. We liked the Varia so much that we’ve made it a permanent addition to our bike tech.