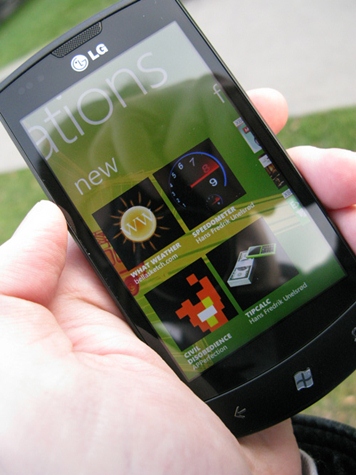 Android’s getting a lot of attention for being forecast as becoming the OS for over half of all smartphones by 2012, but the real story in the report is that Gartner thinks Windows Windows Phone 7 will overtake iOS by 2015 and claim the number two spot.

Despite the skeptical reception the Nokia-Microsoft merger received, its long-term payoff will help drive Windows Phone 7 to a 19.5-percent market share come 2015. Speculation from the report also hints that Apple won’t be so concerned with holding market share, instead preferring to maintain its own profit margins.

At the moment, Windows Phone 7 has a 5.6-percent share, so Gartner believes that it will be able to roughly triple that within the next four years – which you’re right to be suspect about. Even Gartner didn’t believe that some months ago. The firm admits that it has “revised its forecast of Windows Phone’s market share upward, solely by virtue of Microsoft’s alliance with Nokia.” Its last forecast predicted that Windows Phone 7 would “be relegated to sixth place behind MeeGo…by 2014.”

While there are many things about these types of future valuations that you want to take with a grain of salt, the largest assumption to take a second look at in this one is that the Nokia-Microsoft partnership is destined for greatness. Or at least, that within the next four years it will be able to so smoothly align its production efforts that it will be able to leapfrog its competitors to the number two spot. There’s still plenty of concern over the deal; one analyst even told the Financial Times that “Nokia [is] unlikely to regain its previous level of dominance and…the outlook [is] fraught with risk and uncertainty.”

But at least some agree. The IDC recently forecast that Windows Phone 7 would also become the second most popular mobile OS in the world by 2015 (and boldly bested Gartner’s market sure prediction, saying it would claim 20.9 percent).

Maybe these guys know things we don’t, but Windows Phone 7 hasn’t exactly made the thunderous debut that Android did. Google’s mobile OS was the David to Apple’s Goliath, and its success story is inspiring, sure –- but not all that common. It’s not every day that something like this comes out of the woodwork to claim market dominance, and it really just seems like wishful thinking that Microsoft will be able to top Apple and RIM. There’s plenty of criticism about these forecasts, saying they are largely overestimated and revise predictions at the last minute – so the real test now is to keep an eye on what Gartner and IDC are saying about Windows Phone 7 come 2014, apparently.

Topics
Video-editing app LumaFusion to get a Galaxy Tab S8 launch
The best tablets for kids in 2023: top picks for your kids
The best phones for kids in 2023
The best iPhone car mounts in 2023: top 10 best ones you can buy
The best grocery list apps for iPhone and Android in 2023
Yes, we really are completely spoiling the OnePlus 11 and Buds Pro 2 launch
The best rugged smartphones for 2023
The best iPhone games in 2023: 31 games you need to play right now
This Apple leaker just revealed tons of changes for iOS 17 and iPhone 15
Beats Studio 3 headphones are $120 off today at Amazon
How to cheat in Words With Friends
Trading in your iPhone with Apple? You’ll get less than yesterday
The best QR code scanning apps for iPhone and Android in 2023