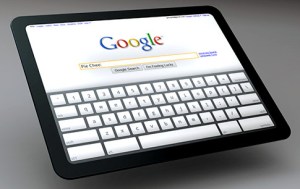 Once more into the breach. Google has become the newest company to claim its intent to steal away the hearts of potential tablet users. Although not officially announced yet, The New York Times is reporting that Google CEO Eric Schmidt has confirmed that his company is well underway in developing an Android powered tablet. No release date has yet been suggested, but with Nokia recently confirming their entry in the tablet market, and HP’s Slate confirmed for Fall, a 2010 release seems likely.

Details are still scarce on the Google tablet, but the report suggests that the tablet would essentially be an e-reader that acts like a computer. Australian website Smarthouse reports that the company HTC- fresh off the release of the Nexus One smartphone it developed with Google- is working on the tablet they are calling the iSlate. Reports confirm that HTC has developed several touch screen tablets, including one based on the Google Chrome web browser. Both devices are seen as direct competition for the iPhone and the iPad.

The details are still under wraps, but a Google tablet would have several advantages over its competitors, including a large Android app store, the ability to incorporate cloud computing and the power that is Google eBooks library.

With up to 600,000 iPads sold, and some projections putting the year end figures in the millions, Apple is doing their best to build up as substantial a lead as possible. With the competition continuing to grow and more and more tablet announcements on the way, one thing is certain.  The tablet wars have officially begun.

Video-editing app LumaFusion to get a Galaxy Tab S8 launch
The best phones for 2022: Which smartphone should you buy?
Reverse wireless charging on the iPhone gets one step closer to reality
How to hide photos on your iPhone with iOS 16
What to expect from Google’s October 6 event: Pixel 7, Pixel Watch, and more
Google wants you to know Android apps aren’t just for phones anymore
I have a confession — I may have been wrong about the Apple Watch Ultra
The best Samsung Galaxy Watch 4 screen protectors
Can’t stand using Instagram in 2022? This app fixes everything you hate about it
Apple AirPods Pro 2 vs. Google Pixel Buds Pro
These 80+ apps could be running adware on your iPhone or Android device
Stage Manager is coming to older iPad Pro models after all
Samsung just copy-and-pasted iOS 16’s lock screen in its One UI 5 beta