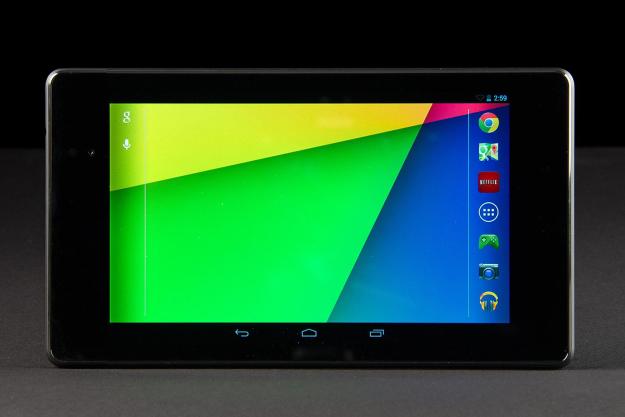 “The Nexus 7 is, again, the king of all Android tablets. At $230, it’s still affordable, and with a Full HD screen, it’s never looked better.”

About a year ago, Google launched its first Nexus 7 tablet. In some ways, it was a desperate move by Google. Priced at just $200, it was leagues ahead of other small devices at its price point (most were far more expensive), and proved that an affordable tablet doesn’t have to be a crappy one. Since, it has grown to capture a good chunk of market share, and has driven back frenemy devices like Nook tablets and Kindle Fires, which technically use Google’s Android OS, but strip out all the services that make Google money. (Android is an open-source operating system, meaning it’s free to use.)

It’s been a year, and that means it’s time for a new Nexus 7. Google’s new offering retains its screen size, but upgrades its resolution and processing power. But at an increased price of $230, is it still the best bargain in tech?

Plain looking, but comfortable to hold

The first Nexus 7 was a bargain and a speed demon for its class, but it was no show horse. The new Nexus 7 is even more boring. It’s a black tablet with a rubberized matte finish on the back. It’s comfortable to hold but there’s nothing to it.

The Nexus 7 continues to be the most responsive, easy-to-use small tablet on the market.

The new Nexus 7 is more compact, all around. It has a thinner bezel on the sides, is about an ounce lighter (11oz instead of 12oz or 300g vs 340g), and shaves a few millimeters off its thickness, sitting pretty at 8.65mm instead of 10.45mm. But these are just numbers. It’s easier to hold the new Nexus 7 in one hand, and that’s all that really matters.

Though the thinner and lighter look is nice, it makes the inch-thick top and bottom bezel look extremely large. This bothered us until we started using the tablet in a landscape (horizontal) orientation. If you hold it sideways, the big bezels actually help you grip the tablet. We found it fun to play motion-based games like Super Monkey Ball on the little guy.

Like its predecessor, the Power and Volume buttons are hidden on the upper back-right side of the tablet. They’re easy enough to find and press that you shouldn’t have any trouble.

Android 4.3 is familiar, but it works

There’s nothing new to Google’s new Android 4.3 (Jelly Bean) operating system. It’s the same old, same old, mostly, but that’s not a bad thing. There are some changes under the hood that speed the whole OS up, but little that you’ll notice visually. Version 4.3 has better Bluetooth support, TRIM (it prevents your tablet from getting slow over time), support for extra, limited profiles for other members of your family, and some other enhancements that are too techy to list (but you can find them here).

Google has enhanced some of its apps and services this summer. The new Maps app is fantastic and we like the Google Play Games hub, which begins to build universal multiplayer functionality into Android.

Most importantly, the number of decent tablet-ready apps on the Google Play Store has increased dramatically. While you once were stuck with a ton of upscaled phone apps, many top apps are now optimized for tablets. Google is upgrading the Play Store to better emphasize tablet apps as well, and filter out apps that aren’t built to look good on your new Nexus.

Android 4.3 won’t incite a tablet revolution, but it’s speedy and easy to use. The Nexus 7 continues to be the most responsive, easy-to-use small tablet on the market (outside of the iPad Mini, which costs $330).

With a full 1920 x 1200 pixels, the Nexus 7 IPS LCD screen packs more liquid crystals than any other tablet of its size. The display is so pixel dense that you’ll strain to see the little buggers, which is a welcomed problem. Text, video, you name it – everything looks amazing on the Nexus 7 screen.

The Nexus 7 screen packs more liquid crystals than any other tablet of its size. It’s so pixel dense that you’ll strain to see the little buggers.

Under that screen are some powerful internals. The $200 model comes with 16GB of internal memory (for file storage), 2GB of RAM, a 1.5GHz quad-core Qualcomm Snapdragon S4 Pro processor, and a 400MHz Adreno 320 graphics processor. Other included things are optional 4G LTE (bumps up the cost), Bluetooth 4.0, stereo speakers (still about second in performance to the iPad), NFC, GPS, gyros, accelerometers, light sensors, and a digital compass – everything you’d expect.

Benchmarks don’t tell a complete story, but the Nexus 7’s new Qualcomm processor is an upgrade from the Tegra 3 last year. In our Quadrant tests, it achieved between a 5500 and 6000, putting it at almost twice the 3500 score of the original Nexus 7. This means it’s roughly as powerful as a Galaxy S3 or any high-end phone from last year, which is good considering those cost about $700 then, and this costs $230 now.

The first Nexus 7 had no rear camera, but Google included one this time around; it’s nothing special. The 5-megapixel shooter doesn’t perform as well as an iPad camera, but does outsnap most tablet cameras. We must stress, that outperforming other tablets does not say much. Photos still come out unfocused, flat, and washed out. There is nothing impressive about the camera. Even the autofocus resembles a smartphone camera of a couple years ago. We are not impressed. If you need to take a picture and you don’t have a real camera or decent smartphone, this will crudely capture the moment for you.

The front-facing 1.2-megapixel front camera does its job well enough. It has a fixed focus, meaning we should just call it a webcam.

The battery in the Nexus 7 is a little smaller than its predecessor (3950mAh instead of 4325mAh) but manages to retain the 9-hour battery life of the original. This puts it ahead of many tablets and about on par with the iPad. We used the hell out of it for an entire day and a half and ended up with about a 30 percent battery. It doesn’t break any new barriers, but battery life is a strong point of the new Nexus.

The second Nexus 7 is better than the first Nexus 7 and remains the best $200-ish tablet on the market. With an upgraded, Full HD screen, a thinner and lighter design, and faster version of Android, it’s as good as you’re going to get on Google’s OS. We recommend it above competitors like the Kindle Fire and would have a tough time choosing between it and the iPad Mini. If you have $100 to burn, the $330 iPad Mini may arguably be a better tablet, but it’s screen sucks compared to the $230 Nexus 7. No matter what your reasoning, choosing a Nexus 7 is not a bad decision.