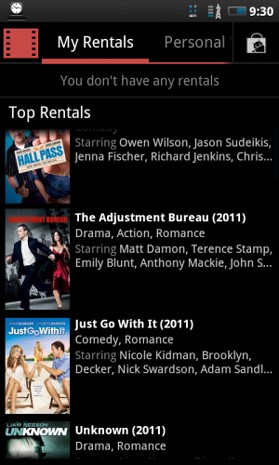 About two months ago, Google launched video rentals via YouTube. Thanks to its then-new partnerships with Sony, Universal, and Warner Bros, Google was able to offer users a variety of film options. Now Google is rumored to be taking the next step and bringing the service to Android handsets.

But this isn’t the first time. Shortly after youtube.com/rentals was introduced, Google made it available to Android users as well. Unfortunately, the service was pulled because of copyright issues relating to rooted devices. Of course, this only affected anyone with a Xoom tablet since the YouTube rentals were exclusively compatible with Honeycomb 3.1. And even while it was only an option for a handful of Android users, the service offered access to more than 3,000 titles, the ability to pin movies to your device and watch them offline, low prices, and 30 days to keep the content.

The legal woes have apparently been solved, however, as the app showed up over the weekend, only to very quickly be pulled by Google. According to the Android Central, the app will be available to more than the Xoom, so long as you’re using a non-rooted device. The good news: The all-too-brief Android Market appearance very likely means that it is shortly on its way to an official appearance – and not just for Xoom owners, for all Android handset users. The bad news: Everyone with quick fingers who was able to download the app before it was pulled reported server errors.