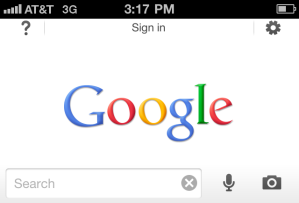 Google announced today updates to its Google Mobile app for the iPhone. The changes include both a new look and user experience, as well as a new name: Google Search.

According to the official Google Mobile blog, the improved Google Search app is “faster and easier” than the previous version.

Changes start with the home screen, which has received a major redesign that matches the look of the Google website homepage. Google has also made it easy for users to sign into their accounts directly from the app’s home screen.

With a swipe of the finger from left to right, users will find a new toolbar, which appears along the entire left portion of the screen. From there, users can choose which type of search they’d like to do, from “Everything” to “Blogs” and “Discussions.” (These tabs match those found when using Google.com.)

The second major change, says Google, makes it “easier to pick up searching where you left off” by including your last search in the search field when users re-open the app.

Users can either type in their search query; speak it using the Voice Search function, which opens by tapping the microphone icon; or tap the camera icon to open the improved Google Goggles feature, which lets users search by taking a picture of something with their phone.

In addition to updates to Voice Search and Google Googles, the company has also made improvements to a wide variety of other features, including My Location and Gmail.

Overall, the app is a vast improvement over the previous version, which seemed like an unfinished product compared to other native iPhone apps. We did notice that the app lags some when using the iPhone 3G, and can cause the phone to freeze briefly. But those using more recent models of the iPhone should have no problem searching to their heart’s content.

Watch a video about the Google Search update: