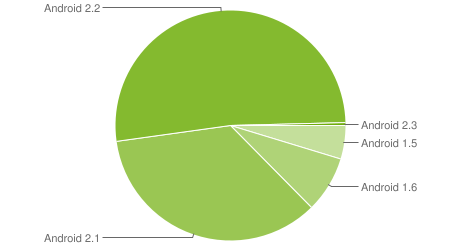 Some phone manufacturers have come under heat lately for being lazy when it comes to Android upgrades. Users – especially those who own Samsung devices – have been losing patience waiting for Froyo. But a post on the Android developer’s blog claims that 50 percent of devices out there are finally running on 2.2.

Keep in mind that Froyo was introduced all the way back in May, and at the end of December a disappointing 43.4-percent of users were using it. Still, in the last month, it looks like carriers and manufacturers finally took customer complaints and media attention to heart, and now 51.8-percent are running Froyo.

The latest OS, Gingerbread, even makes an appearance. A 0.4-percent appearance, but it’s something. You can’t help but hear Steve Jobs’ manically laughing about Android’s “fragmented” market though: Its users are widely spread between its operating systems, and they’re definitely subjected to a cruel cycle of getting their hands on the latest OS right as a new one launches. It seems generous to believe Gingerbread reaches even half of Android users before Ice Cream Sandwich is introduced.

Unfortunately, Samsung customers were not the lucky 8.4 percent to experience the Froyo upgrade. Nasty speculation about the company and its serious lack of OS updates has been brewing for awhile now, and seeing as only one of its Android devices is 2.2 enabled, it might be justified. We told you yesterday about rumors the manufacturer was in a bitter staring contest with carriers over who would pay the fee to upgrade to Froyo, and now Samsung is fighting the bad press. “No. Samsung is not charging carriers for Froyo updates to Galaxy S. We hope to have more detail on status shortly. Promise!” a spokesperson for the company told PhoneScoop.

Video-editing app LumaFusion to get a Galaxy Tab S8 launch
Xiaomi’s new phone has a 200MP camera — and its photos are stunning
Waiting for Touch ID on a new iPhone? This report has some bad news
Apple comes clean with what it really thinks about iPhone 14’s Dynamic Island
The best Apple iPhone 14 screen protectors for 2022
OnePlus wants your help to plant thousands of new trees
How to remove watch links from the strap on your new watch
Best cell phone plan deals for October 2022
When is the best time to post on Instagram?
Best Google Pixel Deals: $250 off the Pixel 6 Pro
The best Samsung Galaxy S20 deals for October 2022
Best Samsung Galaxy Note 20 deals for October 2022
How to manage all of your Apple Watch notifications