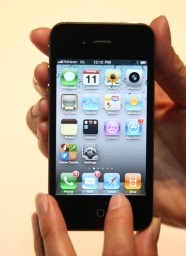 About half of Verizon smartphone users said they will swap out their current handsets for an iPhone 4 when the device becomes available later this week, according to a recent survey by market research firm uSamp.

In a poll of 700 smartphone users, which included both Verizon and A&T networks, uSamp found that 66 percent of Verizon BlackBerry users are not only willing to switch to an iPhone, but are “very” to “somewhat likely” to switch the day the phone is released, February 10. Among Verizon Android users, 44 percent said that they are likely to switch on day one of the iPhone’s Verizon availability. Twenty-four percent of Verizon users said that they are willing to brave long lines (and likely bad weather) to land an iPhone on its release day. All told, 54 percent of current Verizon customers responded that they are “very likely” to switch to the iPhone on February 10.

USamp also found that a significant chunk of AT&T customers are preparing to jump ship as their wireless provider’s monopoly on the iPhone comes to an end later this week. Twenty-six percent of current AT&T customers responded that they are planning on switching to a Verizon iPhone on February 10, with 29 percent responding that they are willing to wait in line to do so. Forty-seven percent of AT&T customers said that it is “very unlikely” that they will switch and 29 percent responded that it is “somewhat likely.”

Last week, Verizon began taking pre-orders for the iPhone, but sold out of its allotted stock after 17 hours. The phone will go on sale on February 10 through Verizon and Apple stores. Some current Verizon customers will be able place orders on February 9 for delivery or in-store pickup.