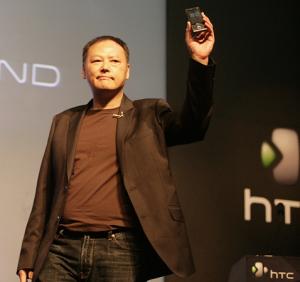 The Seattle Times published a Q&A with HTC CEO Peter Chou yesterday that touched on a variety of topics, including Windows Phone 7, the future of tablets, and T-Mobile’s upcoming G2. When asked whether consumers would have to hold the G2 a certain way because of its metal casing, Chou offered this explanation:

Antennas are sensitive, definitely, but it is our responsibility to take care of whatever the usage is so it won’t be degraded. We can’t complain that antennae is so complicated that ‘user, you have to compromise a little bit.’ You can’t say that. It is our responsibility, our profession, and our expertise to take care of whatever the user scenario.

Q: So you’re not going to tell people “you’re holding the phone wrong” (like Steve Jobs told an iPhone 4 user)?

A: No. I can’t blame consumers, how they use them.

On the topic of Windows Phone 7, Chou said, “This is a significant milestone for Microsoft in the mobile space. … I think it will get positive acceptance from the industry and the market.” He also told The Times that HTC would keep it simple with the first WP7 offerings rather than adding a Sense UI-like differentiator.

Some other highlights from the interview:

We don’t think one device will fit all. What we try to do is come out with a portfolio of devices: we have Windows phone, we have Android phone, we have a keyboard device, a much bigger display like Evo 4G and we have a smaller form factor.

It doesn’t seem like much of a stretch to go from a 4-inch screen to a 7-inch screen. In terms of capabilities and technologies and expertise, we have all of this. But we just want to make sure that we have a very good, differentiated product coming out.

I also believe that we are in a threshold point where all kinds of industries can use smartphones — for education, or health care or energy — so this can be a very important product for people in the future.

In another interview, Chou told FierceWireless that HTC plans on releasing an LTE phone in 2011. The CEO declined to provide any further details about where the phone will be available, and what kind of timeframe it would launch in.