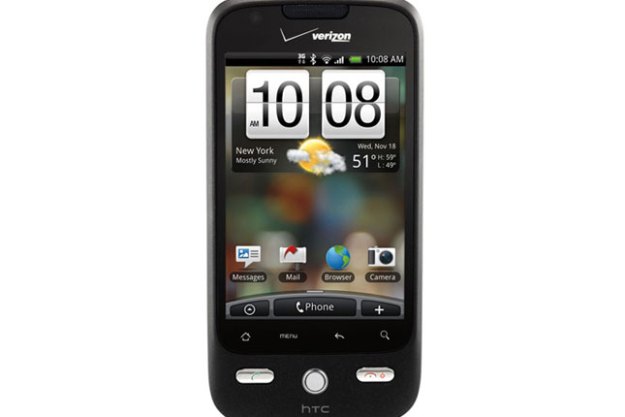 “Eris is an excellent and inexpensive introduction to Android for its subscribers looking for an iPhone alternative.”

If the Motorola Droid is too much and too expensive an Android phone for you, Verizon now offers an entry level Android phone, the HTC Droid Eris, for half the price ($99 with contract and post-rebate). Even though oddly named for the Greek god of strife, Eris provides anything but. Essentially a slightly spruced-up version of the HTC Hero from Sprint, Eris is a quick powerhouse packed with a 5 MP camera, WiFi and visual voicemail, and offers seven home screens, four more than the more expensive Droid.

Eris is a cosmetic doppelganger to Sprint’s Hero. Eris is an austere black slab rather than champagne gray, is a bit thinner, and has four touch controls (Home, Menu, Back, Search) horizontally arrayed under the screen to complement the physical Send, End and jog nipple, rather than the slightly confusing toggle board layout on the Hero. Each has a bright HVGA 3.2-inch touchscreen – but the version of the Eris has more of an off-white background on Web pages than the Hero – and neither has a physical QWERTY.

While Motorola’s Droid will be the first with Android 2.0, Eris is equipped “only” with Android 1.5. However, the Eris, like all Android phones, is upgradable to 2.0, but Verizon reps did not indicate when. What Eris buyers will miss as a result is the free Google Maps Navigation with voice-prompted turn-by-turn directions, available only with Android 2.0.

Verizon generously includes a pre-loaded 8 GB microSD card, half of the capacity of the 16 GB card included in the Droid.

Unlike Droid, Eris is equipped with handy physical phone Send and End buttons, a far more convenient arrangement than the buttonless Droid especially when all you want to do is make a call or just wake up the phone. Unfortunately, HTC didn’t see fit to equip Eris with Bluetooth 2.1, just 2.0. Eris also has seven home screens to Droid’s mere three, which means more room and quicker access to email, phonebook and social networking widgets as well as other apps.

Identical to the Hero, Eris has a miniUSB charging/sync jack at its base, a 3.5mm headphone jack on the top spine, and a microSD slot on its left side but you have to remove the back cover to access it.

Can a phone serve as a workable PMP?

Droid has a half-inch bigger screen, but the Eris fills its smaller screen better – Droid doesn’t let you expand YouTube video, for example, to full screen but Eris does. In practical terms, YouTube videos are actually slightly bigger on Eris than Droid – the two screens measure the same across, but the Droid’s screen at 480 x 854 is longer/wider and more densely-packed than Eris’ 320 x 480 display.

Like the Droid, Eris does not include access to V CAST video or audio content the way Hero grants access to Sprint TV. Verizon execs indicated Android versions of its multimedia content may become available at some point, but could not say when.

I found the Droid to be one of the best sounding cellphones I’ve ever used. While HTC doesn’t quite reach Droid’s lofty aural level, it is still an excellent-sounding phone, clear and crisp with plenty of volume.

Even though Eris’ screen is smaller, its dial touchpad has slightly larger alphanumeric buttons than the Droid. As with all Android phones, you can easily import/sync your Gmail or Exchange phone, calendar and email.

Verizon’s EV-DO Rev. A network enjoys a well-deserved reputation to speed and access, which Eris takes full advantage of. Mobile-optimized pages snap into place in three seconds or less, while non-optimized pages can take 5 to 25 seconds to load depending on graphic content.

Like Hero, Eris allows multi-touch zooming on most Web pages, a capability lacking on the Droid. You can view bookmarks as either a list or thumbnails that you can swipe scroll horizontally.

Eris’ 5 MP camera, although lacking Droid’s flash, does a respectable job on indoor and night shots. I wasn’t fond of relying on pressing the awkwardly located and slippery jog nipple as the phone’s lone shutter release option. But by being careful, I managed to snap relatively clear shots in less than ideal lighting conditions.

There is no physical zoom toggle. You have to swipe the screen in a specific way to get a pop-up slider zoom control. But I had trouble duplicating the swipe motion, and thus getting the zoom slider was a frustrating hit-or-miss.

Disappointing. While I didn’t have time to conduct full tests, Verizon rates Eris’ talk time at merely 3.5 hours (although HTC specs rate it at 5 hours), nearly a half hour less than the Hero and half that of Droid’s lengthy battery life. In a half day of usage, Eris sank to less than half full.

Verizon took its sweet time jumping into the Android marketplace, but the carrier has quickly jumped into the fore of Andoid phone suppliers. Eris is an excellent and inexpensive Introduction to Android for its subscribers looking for an iPhone alternative. While its short battery life is annoying, Eris is an outstanding phone in every other way.

How to update your BIOS