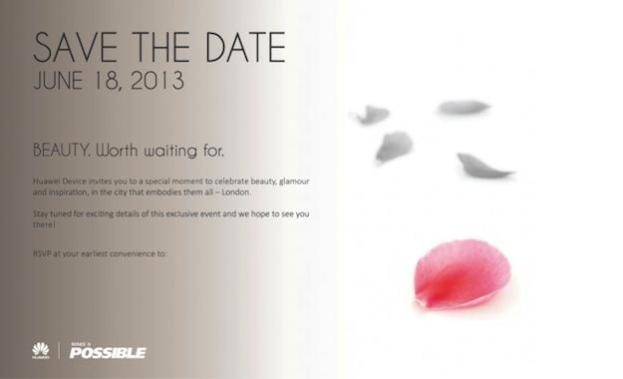 There’s plenty of mobile action to come in May, courtesy of Google I/O, Nokia, Jolla and others, and now Huawei has scheduled an event for June, making the coming weeks look very exciting indeed. Invitations have begun circulating for Huawei’s get-together, which will take place in London on June 18. Unlike Nokia, it hasn’t given much away yet, with the primary message conveyed by the artwork being one of style and beauty.

Now, Huawei may be many things, but we rarely associate the Chinese manufacturer with either of those two words. There’s nothing wrong with Huawei’s hardware, but the designs have always been rather lacking, something it may be about to fix. The blurb continues to say the event will, “Celebrate beauty, glamour and inspiration,” and that whatever it has planned will be, “Worth waiting for.”

Bold words, indeed; so what could it be? Huawei’s catalog is stuffed with hardware which hasn’t been released outside of China, so this could be a ruse to celebrate the UK launch of a phone which has already made its debut. Pocket-Lint thinks it may be for the Ascend P2, which we spent some time with during Mobile World Congress. The report states Huawei has confirmed the phone will be out in the UK next month, and through several UK networks, so it could be correct.

The Ascend P2 is a slim – just 8.4mm – phone with a better than usual design, and although it’s desirable enough to deserve its own launch event, we can’t get the thought of the so-called Huawei Edge out of our minds. This brushed aluminum device was leaked last month, and it definitely qualifies as something beautiful to celebrate, however it was far from looking like a complete phone ready for release.

It’s not the only new Huawei phone on the horizon either, as stories have circulated regarding a super-slim device known as the P6-UO6, which could measure a svelte 6.18mm.So, we should prepare for Huawei to announce the Ascend P2 (again), and hope for a little surprise too.

Video-editing app LumaFusion to get a Galaxy Tab S8 launch
Leaked Huawei P40 Pro renders show an attractive two-tone camera module
Massive leak shows off all four Huawei Mate 30 phones ahead of official reveal
Google and Huawei offer to pay owners up to $400 for Nexus 6P bootloop fault
Smartphone shootout: Huawei P20 Pro vs. Samsung Galaxy S9 Plus vs. Google Pixel 2 vs. Apple iPhone X
5 phones you absolutely shouldn’t buy on Black Friday
How to set up and use a second line on an iPhone with an eSIM
Apple iPad Mini just got a $100 discount for Black Friday
Apple’s MagSafe Leather Wallet for iPhone is 24% off for Black Friday
Why the cheap Pixel 7 ruins all other Black Friday phone deals
MagSafe PopSockets are life changing, and on sale for Black Friday
This iPhone 11 Black Friday deal is crazy good — get it for $199
The best Black Friday phone deals for 2022