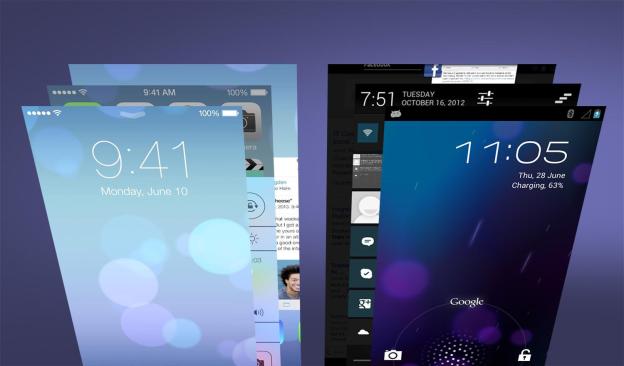 Derived from Apple’s OS X, iOS kicked off the touch revolution six years ago. But while competitors like HTC, Samsung, LG, Google, Microsoft, and BlackBerry have constantly shown off newer and better looking versions of their own operating systems, Apple has largely refrained from tinkering with its success. Until now, that is. Due to mounting pressure from Android phones, Apple has redesigned iOS and added a host of new features. With iOS 7, Apple is trying to pull even with and one-up Android at every turn. So how does iOS 7 look when it is put side-by-side to Android? Below, we compare the lock screen, notification bar, and many other features to show you just how much iOS 7 does and doesn’t look like Google’s Android.

Without diving in to the patent war between Samsung and Apple, the lock screen that Apple went through the trouble to defend in court was eliminated. This change is probably the best indication of what it has done to the entirety of iOS 7. Apple’s OS greets you with a new, clear, simple look that may or may not be a direct homage to Android’s own lock screen. All you’ll see is text telling you the time, date, and the directions to slide to unlock your device. In contrast, Android has a similar looking screen, but allows users to customize the information they get with widgets. Though widgets were rumored to make their way into iOS 7, they are still absent. So if you count on information presented in a translucent box  to fill your lock screen, chalk this up as a win for Android 4.2 Jelly Bean.

While we’re talking about the lock screen, it’s worth noting that iOS 7 offers the ability to view the notification bar without unlocking your device. This is a feature that has been present in Android for a few versions now. Previously, iOS users could view recent notifications, but not the whole list. There are differences in the design of iOS’s notifications, though. The Notification Center in iOS presents all information in a tabbed menu, allowing users to browse their notifications under Today, All, or Missed. Android simply presents these in a listed fashion in the order they are received and can then be dealt with as needed. The preference here will come down to how you like your notifications organized, how many yo get on a daily basis, and how you prefer to handle them. If you like to take care of things immediately, Android’s system is probably best for you as you can take action or dismiss them with some easy swipes. Apple’s redone notification system, on the other hand, will be nice for those who compartmentalize and don’t immediately act on notifications.

Apple is probably best known for it’s single button approach to things, a design commitment that has long confused Windows fans when they use an Apple mouse with only one button on it. The iPhone and iPad only have one single button for navigation and the rest is done on screen. To streamline the process, Apple apps now feature slide-out “drawers” to enhance in-app navigation. These drawers have been present in Google-made apps for some time now – including the iOS versions of those apps – but it’s an effective way to get in and out of different areas of an app without needing to back out of a screen entirely to get to something. It’s one of those borrowed “innovations” that will turn iOS users on to something that Android users have enjoyed for a year or so.

Apple has given its users easy access to the Control Center with a swipe up from the bottom of the screen and given the center a revamped look that focuses on quick toggles. These are a welcome addition to iOS, as they simplify the process of making quick settings changes without having to flip through tons of pages of things you don’t need to get to the specific setting that you’d like to adjust. These toggles focus on the most common settings that you’re likely to work with, like Wi-Fi or Bluetooth connectivity, brightness, and airplane mode. Apple’s Control Center also gives quick access to iTunes controls and apps that you may want to have handy, like the flashlight, the calculator, or the camera.

Android’s Control Center varies widely by the phone maker; sometimes it’s great and sometimes it’s nonexistent  For example, Samsung’s Galaxy phones have long used quick toggle style buttons in its settings. Android 4.2 also introduced a two-finger downward swipe to access controls and quick toggles. While Android doesn’t have the integration of other apps within its control center equivalent that iOS 7 has, this can largely be rectified with widgets on the phone that give quick access to controls of specific apps. And, as we know, iOS still doesn’t have widgets.

Here’s a feature that’s been a long time coming for Apple device owners. For too long, iOS has limited users in how much they can do at one time. Multitasking has been implemented within iOS 7 and is likely to be a game changer for the frequent phone and tablet user. Multitasking functions with any app downloaded from the App Store, not just Apple’s own. The visual style of multitasking on iOS looks inspired by WebOS, presenting all apps running in a  fullscreen, flashcard style and allowing users to swipe through to find the app they are looking for. You can also swipe up to close the app. Icons are also placed at the bottom of screen if you’d like access that way.

Multitasking isn’t exactly a new concept, though. Android users have benefited from it for years. While the feature makes the same functionality available, Android’s style is considerably different. It doesn’t give a full screen look but rather just a glimpse of the app, with the icon and name of the app next to a preview image. Browsing is done vertically rather than horizontally like in the iOS 7 set up.

During its WWDC presentation, Apple acknowledged that users are likely used to seeing a red number next to the App Store icon with a number that is constantly climbing, representing the number of updates available for their apps. That will disappear, as updating will now be done automatically. We can’t deny that it doesn’t take much for app updates to stack up, but there’s always a concern that you may boot up your phone and have to watch it update 30 apps for five minutes. Apple promises these updates will only take place when you have a good reception and a strong signal so it won’t struggle to pull in the update when you have no bars.

Android users have enjoyed the automatic updates of their apps for awhile now, so it’s one of those moments of playing catch up on a pretty basic convenience. The promise of Apple’s auto update that will only take place when it won’t inconvenience you is nice, though, as we’ve experienced moments of slow down on Android only to notice there’s an app update taking place that we didn’t know about. We’ll see how well Apple’s promise pans out in practice, though.

When talking about wireless sharing during its WWDC keynote, Apple took a shot at Android users for having to “walk around the room” looking for someone to “touch phones with.” That’s a bold shot to take while you’re introducing a function that someone beat you to, but Apple is pretty proud of iOS 7’s AirDrop feature. It makes sharing between users exceedingly simple. On any app that has a share sheet, you can now choose AirDrop and send photos, videos, files, or whatever you’re trying to pass along to a friend.

There has been an NFC (near-field communication) feature similar to this in Android called “Android Beam” available since Android 4.0. Likewise, Android phone makers like Samsung have had features that allow for easy sharing between phones. (That’s where the bumping phones thing comes from.) Samsung even has Wi-Fi Direct, which pretty much does what AirDrop promises to do. AirDrop also will only be available in the latest versions of iOS devices, meaning the iPhone 5 and iPad 4th generation. Even older Android phones have a solution of some sort comparable to AirDrop’s services.

There’s no denying that Apple pulled some inspiration from Android with iOS 7. It quietly admitted that iOS has stagnated for a little too long, and made some major changes. Call it playing catch up, call it copying, but iOS 7 is a necessary step for any progression in Apple’s mobile OS. While Android users can always claim they had it first, iOS users will still welcome the changes put in place with iOS 7. The new look is appealing and well themed throughout the OS and iOS devices now are capable of doing more than ever before. If Apple can keep up with the constant changes and innovations that Android offers up and maybe even beat Android to the punch on a few things, we might have ourselves a fair fight in the mobile OS war. That is something that all mobile users can benefit from, because nothing breeds innovation like competition.