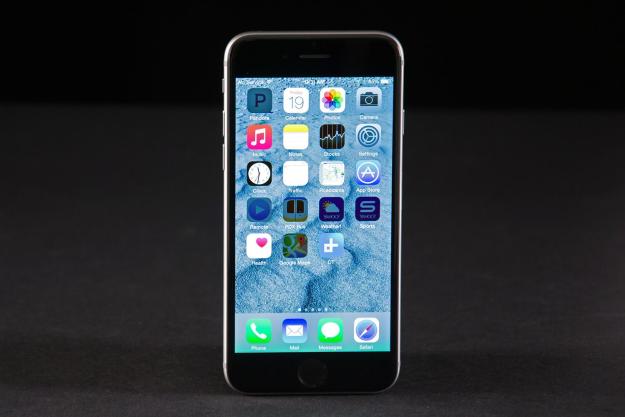 “Even though the iPhone 6 is significantly bigger than every previous iPhone, it’s still a manageable size. If you’ve always used an iPhone and aren’t sure you want a phablet, the iPhone 6 might be the way to go.”

After years of eschewing larger screen sizes, Apple has finally submitted to peer pressure and released two significantly larger iPhones. The iPhone 6 may be the more petite of the two, but it’s still significantly bigger than the 4-inch iPhone 5S. How will iPhone users who’ve never even touched a phablet in their lives react to the iPhone 6 and how does it compare to the competition?

The first thing you notice about the iPhone 6 is the obvious thing — it’s bigger. It seems as though Apple took great care to make the new iPhone feel normal, and it does fit perfectly in any size hands. Part of its success is owed to the slimmer, and slightly rounded design.

The iPhone 5S feels much more square in the hand than the iPhone 6. The iPhone 6’s curves ensure that it nestles into your palms and eases the grip of your fingers on the side. Even so, we found it more slippery to hold, though not as much as the HTC One M8. The screen curves slightly in to meet the body of the phone, furthering the illusion of a perfect, seamless case.

The iPhone 6’s curves ensure that it nestles into your palms and eases the grip of your fingers on the side.

In terms of size, the iPhone 6 is narrower than the 2014 Moto X, but it looks just about as tall as the new Moto, which has a 5.2-inch screen. Oddly, its huge top and bottom bezels make it the same size as the Moto X, even though it has a smaller screen. At this point, it’s a waste of space, but Apple is wedded to the Home button, where its Touch ID fingerprint sensor is located. The iPhone 6 is just a hair narrower than the HTC One M8 and quite a bit shorter.

The power button has now moved to the right-hand side and we found that it aligned with our index finger or thumb well. We’ve been hoping that Apple would move the power button ever since the iPhone 5 came out. The new position makes it much easier to turn the phone on and off. Muscle memory will have hard-core iPhone users looking for the button at the top, but the side switch is easier to reach.

The camera sticks out slightly from the back of the device, but it’s not too noticeable. It’s positioned much closer to the edge of the phone, though, so you’ll have to be careful not to cover the lens when taking pictures as you hold the phone horizontally.

Our review unit features the gold finish, which adds a bit of personality to the design. The only real complaint that we have about the phone’s design is the odd, white lines on the back. Personally, we wish the space between the white lines were filled in white as it is on the iPhone 5S. The lines look sloppy and almost accidental.

We’ve been using iOS 8 since it arrived on September 17. It looks and works almost exactly like iOS 7, but with a few minor alterations. Unfortunately, two of the biggest features — Apple Pay and HealthKit — are currently unavailable. The HealthKit app isn’t intuitive, easy to use, or particularly useful. The absence of compatible apps due to a bug in the system has only exacerbated the issue.

One of our favorite new features is the ability to add third-party keyboard apps. We tested SwiftKey on our iPhone 5 earlier this week and now we set it up on the iPhone 6. Since the screen is so much bigger, it’s much easier to use the swipe-to-type function, and our fingers have more room to maneuver. We found that we made even fewer typos on the 6.

Certain aspects of iOS 8 are available only on the iPhone 6 and 6 Plus, such as Apple Pay (which hasn’t been released yet) and Reachability, the feature that aims to make using bigger screen iPhones easier for old-school iPhone users.

Tap twice on the Home button, and all your apps slide down to meet your thumb. If you touch anywhere above the apps, the notification shade will drop. Even though we found the 4.7-inch screen easy enough to use one-handed, we could see how Reachability would be helpful on the iPhone 6 Plus.

Sadly, the iPhone 6 doesn’t have landscape mode like the iPhone 6 Plus, so when you tilt the phone horizontally in compatible apps, nothing happens. We were pretty bummed out about this.

The other problem we faced with the user interface on the iPhone 6 was that many apps have yet to update to accommodate the new pixel resolution of the screen and iOS 8 itself. Thanks to scaling, you don’t see those annoying black, dead spaces — which is a very good thing on this much larger screen — but the old apps look a little fuzzy. The issue isn’t as bad on the iPhone 6, but pixel snobs will spot it right away. Of course, as developers update their apps, this problem will disappear.

The iPhone 6 features minor hardware upgrades, but the 4.7-inch screen has the same pixel density of 326 ppi as the 5S. It has a higher contrast ratio, though, making it appear brighter and the colors slightly richer.

There’s a new 64-bit A8 processor onboard alongside 1GB of RAM (we think) and the new M8 motion coprocessor. The iPhone 6 loads websites faster than the iPhone 5 and YouTube videos streamed just a bit faster on the 6, but the difference isn’t astonishing.

Most users will probably fork over the extra $100 for the 64GB version and we think that’s just highway robbery.

In terms of connectivity, the iPhone 6 has 802.11a/b/g/n/ac Wi‑Fi, Bluetooth 4.0, and finally, NFC, though it’s limited to Apple Pay for now. It’s also got Wi-Fi calling on T-Mobile’s network and VoLTE.

We were very disappointed that Apple didn’t waterproof the iPhone 6, especially now that it’s becoming a standard feature on Android smartphones. However, the most irritating thing about the iPhone 6 is Apple’s failure to increase the minimum storage option from 16GB to 32GB. In this day and age, 16GB is simply not enough for the average user. Most people will probably fork over the extra $100 for the 64GB version — we think that’s just highway robbery. The lack of a MicroSD card slot is also upsetting, though not surprising.

The iPhone 6 also runs hot when you watch videos or download tons of app updates all at once. It didn’t burn our hands, but it sure was hot.

Sharper camera focuses in on details

Even though the iPhone 6 has the same 8-megapixel resolution camera on the back as the iPhone 5, it shoots sharper photographs. In our tests, the iPhone 6 captured much more detail in close-ups and shots from a distance. Colors also appear to be richer, and focusing in on light areas of a photo doesn’t seem to bleach the colors as much.

As we mentioned earlier in this review, the camera module sticks out from the body and is located closer to the edge of the phone. We found ourselves touching the lens from time to time when we took landscape photographs.

As expected, the data speed on T-Mobile’s network was very fast. We could even stream YouTube videos without a single hitch or buffering.

Since we haven’t been able to extensively test the iPhone 6 over days yet, we can’t tell you how the iPhone 6’s battery fares after a full day’s use, but we do know that its 1,810mAh battery is just slightly bigger than the 1,560mAh battery in the 5S. iPhone battery life is notoriously bad; we’ll let you know soon if Apple has improved it on the iPhone 6.

Apple’s iPhone 6 may not be a revolutionary device, and there’s no denying that it’s playing catch up with Android smartphones in many ways, but this phone still easily ranks among the top smartphones of 2014. Overall, the iPhone 6 is a modest upgrade over the iPhone 5S. The screen size and new slim, rounded design are the biggest changes. To users, these features are old hat, but to iPhone users, it’s a huge, huge change.

Even though the iPhone 6 is significantly bigger than every previous iPhone, it’s still a manageable size. If you’ve always used an iPhone and aren’t sure you want a phablet, we’d recommend that you go with the iPhone 6. And if you are an Androider, give iOS a look.

Topics
Video-editing app LumaFusion to get a Galaxy Tab S8 launch
The best grocery list apps for iPhone and Android in 2023
Best Fitbit in 2023: 6 best watches and trackers
Samsung Galaxy S23: release date, specs, price, rumors, and news
This is the OnePlus Pad — the OnePlus tablet we’ve waited years for
Is the Samsung Galaxy A14 5G waterproof?
The best fitness trackers in 2023: our 10 favorite picks
Watch the Galaxy S23 Ultra get unboxed a week before launch
The best iPhone apps in 2023: 50+ apps you need to download now
The iPhone 15 Pro’s rumored new design is one I can’t wait for
The best folding phones in 2023: our 6 favorite foldables right now
You can finally take ECGs and track AFib on a Garmin smartwatch
I bought a $50 Apple Watch Ultra clone, and it blew me away