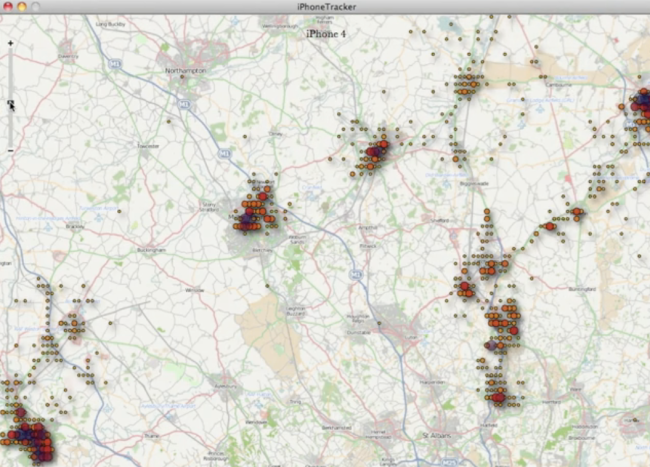 Security researchers have found that your iPhone not only knows where you are, but is also recording your location and storing the information — without your consent and likely without your knowledge. The researchers will present their findings today at Where 2.0, a security conference being held in San Francisco.

According to researchers Alasdair Allan and Pete Warden, as a user moves about their iPhone silently records timestamped latitudinal and longitudinal coordinates and stores them in a hidden file. When an iPhone is then synchronized with a computer, that file is then transferred over to the computer’s hard disk, where it is clandestinely stored.

The privacy implications are quite severe. As Warden points out, “Apple has made it possible for almost anybody – a jealous spouse, a private detective – with access to your phone or computer to get detailed information about where you’ve been.”

The location recording appears to have been initiated with the release of iOS 4 last June. That means some users may have unwittingly accumulated a year’s worth of location information that’s stored somewhere on their phone or computer.

Wireless companies do track and store locations based on phone use, but that information is kept behind firewalls and usually only obtainable through a court order or warrant.

The good news is that the researchers don’t believe that the information is being transmitted to Apple or to any other third-party company or service. The reason for the information gathering in the first place, however, remains a mystery. One possibility is that Apple is planning (or was planning) to use location history as part of a future app or service. An ad service that targets users most-frequented locations would be one likely use for the data. The researchers don’t believe that the information gathering is accidental.

The iPhone wasn’t the only device that researchers looked at, but it was the only device where an issue was discovered. “Alasdair has looked for similar tracking code in [Google’s] Android phones and couldn’t find any,” said Warden. “We haven’t come across any instances of other phone manufacturers doing this.” The researchers did find, however, that 3G-enabled iPads also record location data in a similar manner.

If you would like to see what your iPhone knows about your travel habits, Allan and Warden have you covered. The researchers have released a free app called iPhone Tracker to allow concerned iPhone owners to examine the location information that their phones have recorded. While the program will show you what your iPhone knows, so far there doesn’t seem to be an easy way to prevent the location data gathering from happening in the first place. Our advice: if you’re going somewhere you shouldn’t be, consider leaving your iPhone at home.

Video-editing app LumaFusion to get a Galaxy Tab S8 launch
Today’s best deals: TVs, laptops, iPads, robot vacuums and more
The iPhone 14 Pro’s Dynamic Island needs to get a lot more useful, fast
Forget Apple’s newest iPad — the Galaxy Tab S8 should be your next tablet
How to unlock a phone on every carrier in 2022
The best iPhone games to play in December 2022: Marvel Snap and more
I thought iOS 16 would ruin my iPhone 8, but it shocked me
The best Android games available right now (December 2022)
The most innovative tech products of 2022
This ridiculous smartwatch has a hidden pair of earbuds inside
This retro battery pack is way cooler than it has any right to be
Apple Health vs. Samsung Health? What I learned after using both
Samsung Galaxy S23: release date, specs, price, and all other rumors