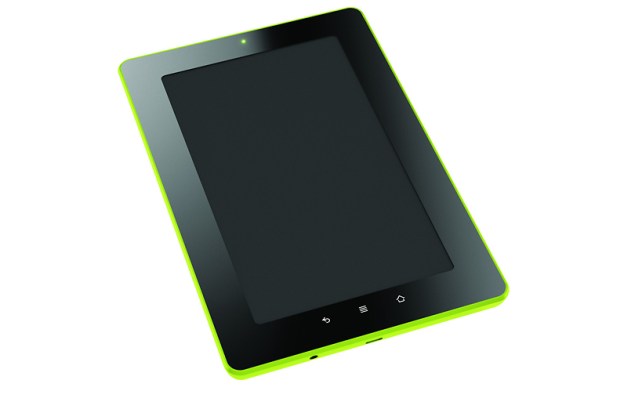 Not wanting to be outdone by Amazon and Barnes & Noble, e-reader maker Kobo unveiled a competitively priced 7-inch-screen tablet on Wednesday.

The Vox goes up against Amazon’s Kindle Fire and Barnes & Nobles’s Nook Color tablets. At $199.99, the device will be selling for the same price as Amazon’s new Kindle Fire. The Nook Color currently sells for $249 – let’s see if Barnes & Noble knocks $50 off that in the next few weeks.

The Vox runs on Android 2.3 and sports a 7-inch 1280×800 touchscreen, which its makers claim performs extremely well in bright conditions.

The device weighs 14.2 ounces (slightly lighter than the Fire and Nook Color) and comes with an internal memory of 8GB (enough for 8,000 books) that can be expanded with a microSD card.

If you don’t fancy the lime green band (as shown above), you can choose from pink, blue and black alternatives.

Kobo is touting the new tablet as “the world’s first social e-reader,” with its links to Facebook allowing users to communicate with others reading the same book.

Kobo CEO Michael Serbinis commented on the new tablet, saying, “Kobo Vox is the reader for your connected life, and opens the door to the next generation of e-reading – social e-reading – where books can come alive in color and conversation. Readers can get more out of their experience by connecting with Kobo’s global community of book lovers.”

He added, “Plus, with Kobo Vox you have the freedom to connect with friends, listen to music, watch movies, play games and discover new apps with almost unlimited choices.”

Toronto-based Kobo said its new device is now available for pre-order and will begin shipping on October 28, giving it a two-week head start on the Kindle Fire.

Though Amazon is expecting to shift a substantial number of Kindle Fires in the run up to Christmas, savvy shoppers on the hunt for a reasonably priced tablet will no doubt want to carefully examine the offerings of its two main rivals, the Nook Color and Kobo’s Vox, before making a choice.