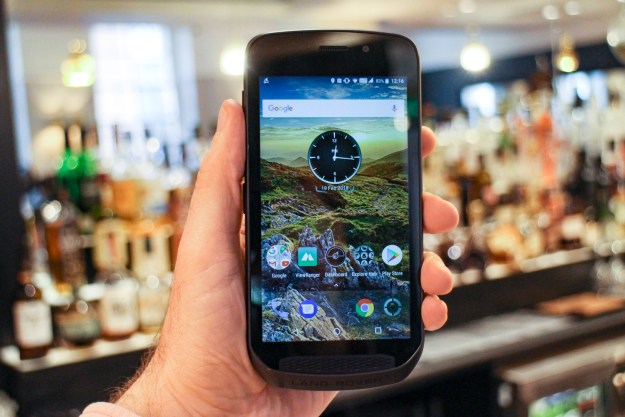 “The rough-and-tumble Land Rover Explore may be the ultimate active smartphone.”

There’s a Land Rover sitting in your garage, a pair of kayaks resting up against the wall, and you’ve got this weekend’s hiking route already sorted out. If only your phone was as prepared. Modern, high-end smartphones are delicate little flowers, and won’t keep up with a seriously active lifestyle. That’s where the Land Rover Explore comes in, a phone that goes beyond those dreary rugged phones none of us want to buy, while doing the job we want them to do. The Land Rover Explore is a lifestyle phone, in that it looks decent with a desirable brand behind it.

The Land Rover branding is the first thing you notice about the phone, and while crucial to its appeal, it’s not what makes the device special. Built in partnership with Bullitt Group, the manufacturer responsible for Cat Phones, the Land Rover Explore employs a Motorola Moto Mods-style modular design. Using special magnets on the back, you can attach modules to the phone, enabling extra functionality. In the box is the Adventure Pack, representing what the Explore is for, and the people interested in buying it.

Sliding the Adventure Pack into place is easy and satisfying. Not only is it easy to remove by simply sliding it down from the device, but it’s also designed to break apart in the event of a fall. Primarily, it’s a battery pack with a 3,600mAh capacity.

The Land Rover Explore is super tough, with an IP68 water resistant rating, a very tough body, including an H-4 glass screen protector fitted over the Gorilla Glass 5 screen at the factory. The Adventure Pack’s battery is bigger than most expensive smartphones, but so is the built-in battery on the Explore itself — coming it at a whopping 4,000mAh. With the Adventure Pack added onto the phone, expect this device to last a really long time.

But there’s also a special 25 x 25mm Ceramic Patch GPS antenna on the Adventure Pack that adds even more functionality to the Land Rover Explore.

Adventures with the Explore

Similar to the antennas used in standalone GPS devices, the Ceramic Patch GPS antenna is considerably more powerful than the one in your phone, pulling in specific location data in challenging environments. It doesn’t require data if you drop out of reception, and thanks to the extra battery pack, the Explore will still last a day with continuous GPS use and the screen on for 50 percent of the time. It’s linked with ViewRanger’s mapping technology — a voucher to download content comes with the phone — for incredibly detailed location data, and even uses the camera for augmented reality waypoint visualization.

A phone that goes beyond those dreary rugged phones none of us want to buy.

Currently, there is only one other module to use with the Land Rover Explore. It’s another battery pack without the GPS antenna, but with a massive 4,370mAh cell. Both this and the Adventure Pack are IP68-rated and drop proof too. There is also a thick protective case that fits the phone with the Adventure Pack added, which has a clip for either a cycle handlebar mount, or a carabiner clip.

Used on its own without the module, the Land Rover Explore still feels big and thick compared to modern high-end smartphones. Put the Adventure Pack on and it’s gigantic. It’s most certainly a phone to be stowed inside a big jacket pocket, rather than a pocket on skinny jeans.

We like the phone’s Land Rover styling references, from the grill on the front matching the new Discovery to the frame surrounding the camera lens on the back, resembling a Discovery headlight on the back; but the bezels on the phone are substantial, and the overall look is “traditional,” rather than ultra-modern. To its intended audience, this probably won’t matter.

This is a mid-range smartphone with a 5-inch touchscreen, a 1,980 x 1,020-pixel resolution, a MediaTek Helio X27 processor, 4GB RAM, 64GB storage space and the option of adding a MicroSD card or second SIM. The camera has 16 megapixels on the back, and 8 megapixels on the front. Android 7.0 Nougat is installed and an update to Android 8.0 is on the way, but the phone is fairly close to stock Android, with only a few apps and features added by Land Rover and Bullitt.

This includes the ViewRanger app, and an app to display key information relevant to your activity, all pulled from online sources and the built-in sensors. If you’re hiking, the screen shows the compass, weather information, barometric data, and more. If you’re cycling, it shows speed, distance traveled, and other details. A quick-access widget is placed on the home screen to make it easy to find on the move, and you can set up multiple profiles to track different activities.

We also really liked a special night vision filter that can be applied to the screen. Think of it like a reading mode for viewing the screen in ultra-low lighting. The screen goes almost red in color, which minimizes any glare that obscures vision when you look away. Important if your safety depends on seeing where you’re going.

The Land Rover Explore is made to appeal to those who don’t want a Cat phone, due to its utilitarian looks and possibly superfluous functionality. It’s also for people who who would rather opt for a rugged device, over an all-glass, expensive smartphone.

What it’s not is a phone only for Land Rover owners, despite the brand’s input. We see it as a lifestyle phone, fitting in with the activities of people who either do buy a Land Rover, or desire one. We dislike dreary, cash-in brand partnerships, and are thankful the Land Rover Explore doesn’t fall into such a category.

However, for it to succeed long term, more modules need to come. Bullitt told Digital Trends it is working on others, and is keeping tight control over those that make it to production. It wants them to serve a purpose, and benefit the type of person that buys the Explore in the first place. It won’t be offering a hardware development kit, for example, stopping dozens of unneeded battery packs from third-party developers.

For it to succeed long term, more modules need to come.

We’ve heard this before, and have still seen modular phones fail — LG with the G5 and its Friends, and Google’s own Project Ara — so we’d be wary of buying the Land Rover Explore on the basis of what modules may come in the future. But for now, if the Explore fits in with your lifestyle and it’s a struggle to find a phone that keeps up, this could be exactly what you’re looking for.

You’ll pay 600 British pounds, or $839 for the Land Rover Explore and the Adventure Pack when it goes on sale in April. There are no plans to bring it to the U.S. at the moment.