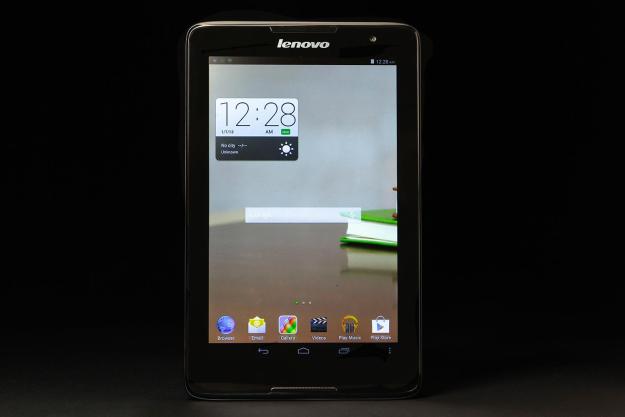 “Although Lenovo is marketing the A8 as a great bargain for buyers with a tight budget, it doesn’t live up to expectations. You can buy a 2013 Nexus 7 from Google for only $50 more, and you should.”

When you’re low on cash, it doesn’t get much better than a $180 tablet. Lenovo’s new A series of tablets are built for buyers on a budget. The Lenovo A8 is a typical 8-inch tablet with a HD display and other mid-range specs.

It’s certainly cheap, but how does it compare to the wallet-friendly 2013 Nexus 7 and the premium iPad Mini? Let’s find out.

Difficult to hold in one hand

When it comes to 7 and 8-inch tablets, it’s all about how easy it is to hold in one hand. As an 8-inch tablet, the Lenovo A8 is a significantly wider than other small tablets and, consequently, much more difficult to use one-handed. The bezel around the tablet’s edges is excessive and adds a lot more bulk to the design than is necessary.

To make matters worse, the A8 is heavy, weighing 350 grams. The iPad Mini, which is almost an 8-inch tablet with its 7.87-inch display weighs just 331 grams and its made out of aluminum, not plastic like the Lenovo tablet. The extra weight adds to the feeling that the A8 isn’t mean to be held with only one hand.

As far as looks go, the A8 is simple, if not a bit plain. Luckily, Lenovo offers the A8 in several different color options, including white, navy, yellow, and a coral color. The back has a matte finish, which feels nice to the touch.

Not a Full HD display, but still a good one

The Lenovo A8 features an 8-inch IPS LCD display with a resolution of 1280 x 800 pixels, which is quite a bit lower than the 1920 x 1200 pixel display on both the 2013 Nexus 7 and Kindle Fire HDX 7. Even though it’s not Full HD, the A8’s display looks bright and clear. The difference in display quality is only noticeable if you’re looking for it.

While watching music videos on YouTube, we also noticed that the Dolby speakers on the front of the A8 offered decent sound quality. However, in comparison with out 2012 iPad Mini, the A8’s speakers sounded strained at full volume.

Less than stellar processing power, but decent for a cheap tablet

In terms of processing power, the Lenovo A8 is by no means a beast. The tablet features a quad-core 1.3GHz MTK 8121 processor from MediaTek and 1GB RAM.

We noticed a significant lag in load time for YouTube videos. We placed the Lenovo A8 ide by side with our iPad Mini to find out just how long it took to load the same video on both devices. It took the A8 took 26 seconds longer to get the video going. However, once the video appeared, it played without buffering.

The Lenovo A8 did perform well with simple tasks, such as Google searches, Twitter updates, and weather forecasts. Even though it is a bit heavy, the A8 is a good tablet for reading ebooks and light Web browsing.

In benchmark tests, the Lenovo A8 received mixed results. In the 3D Ice Storm Extreme benchmark, the A8 received a score of 2095, which was lower than the Acer Iconia W4, which scored 14395.

Even though it is a bit heavy, the A8 is a good tablet for reading e-books and light web browsing.

Lenovo offers only 8 or 16GB storage options for the A8, but luckily, there’s a SD card slot, so you can expand the storage up to 32GB.

In terms of connectivity, the A8 also comes with Wi-Fi b/g/n, Bluetooth 4.0, and GPS connectivity. Although our review unit was a Wi-Fi only model, there is a 3G LTE version available, too.

Android 4.4 KitKat is beautiful and functional

Android 4.4.2 KitKat is a whole lot nicer to look at than Jelly Bean was. The flat UI design, colorful icons, and butter smooth functionality of KitKat are very pleasing.

Increased Google Now functionality is a hallmark of this latest version of Android and it works very well on Lenovo’s A8. Google Now preferences and cards are easy to customize and the app is great at knowing what you want to see.

The A8 comes with a lot of the most popular apps pre-installed, including Evernote, AccuWeather, Amazon Kindle, most of the Google app suite, and a few special apps from Lenovo.

Even though cameras on tablets are often regarded as superfluous, especially since they are usually so terrible, Lenovo placed a 5-megapixel camera on the back of the device and a 2-megapixel camera on its front. The front-facing camera makes for great Skype video calls, while the back camera takes somewhat grainy photos.

In the event that you need to take high-quality shots with a mobile device, you’d best look to your smartphone instead. The A8’s 5-megapixel camera performed slightly worse than the Nexus 7’s camera, even though they are the same resolution. The images were grainy and the color saturation left a lot to be desired.

The A8 contains a large 4,200mAh battery, which Lenovo says lasts up to 8 hours while browsing the Web with Wi-Fi. In our tests, we found that number to be close to accurate.

The Lenovo A8 has a decent, 8-inch HD display and a nice, simple design. The extra inch of screen real estate makes the A8 more appealing, but its slow processor and mediocre performance detracts from that good first impression.

If you are looking for a cheap tablet that can handle Web browsing, ebook reading, and other simple tasks, the A8’s $180 price is worth it. However, if you hate waiting for videos to load and need something zippy, you’d best look elsewhere.

Although Lenovo is marketing the A8 as a great bargain for buyers with a tight budget, it doesn’t live up to expectations. You can buy a 2013 Nexus 7 from Google for only $50 more. Given the huge difference in quality between the two tablets, we recommend you pay the extra money.