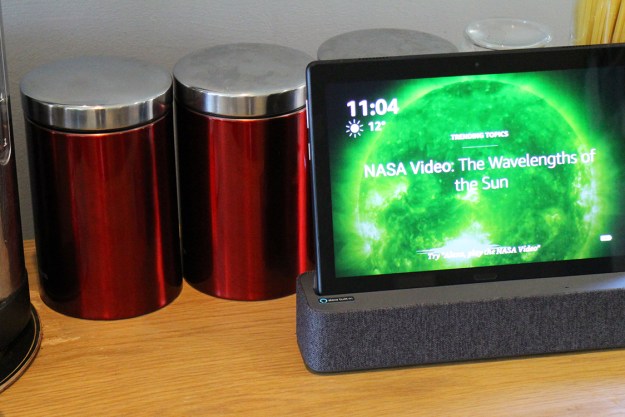 If you’ve watched the rise of smart displays with puzzlement wondering why people are buying tablets that are permanently fixed to docks with speakers, then Lenovo has a product for you. The Lenovo Smart Tab P10 is a 10-inch Android tablet that comes with a separate dock. You can use it for gaming, reading, movies, and whatever else you fancy just like any other tablet, but slide it into the dock and it goes into smart display mode where it serves as an Amazon Echo Show.

Starting from $300, does the Lenovo Smart Tab P10 offer the best of both worlds, or is it a hybrid that tries to do too much and falls short?

Attractive design, but not very practical

When you first take it out of the box, the tablet looks and feels quite expensive. There’s glass front and back with an angular metallic frame and silvery highlight. Holding it in landscape, there’s a textured power button on the left side with a volume rocker above. You’ll find the USB-C charging port and headphone jack on the right.

The bottom edge has Pogo pins that enable it to connect to the dock for power – it still has to connect via Bluetooth for the speaker and the volume controls on the dock to work.

There are four front-facing speakers in the Lenovo Smart Tab P10 offering Dolby Atmos surround sound for real immersion, though it inevitably sounds quite tinny and you’re far better off with the speaker in the dock which has some bass.

There’s an 8-megapixel camera on the back at the top left that sits flush under the glass. The front-facing camera is above the screen and rated at 5 megapixels.

Big bezels around the screen detract from the premium feel the P10 is shooting for, though they do make it easier to hold. The 10.1-inch LCD IPS display is bright, colorful, and boasts a sharp resolution of 1,920 x 1,080 pixels, which makes it a highlight.

There’s also a lozenge-shaped fingerprint sensor at the bottom of the screen when you hold it in landscape. This placement is supremely awkward, ensuring that you have to hold it in one hand and touch the sensor with your other when you’re just using it as a tablet. It’s even more difficult to get at when docked, so you’ll probably want to use Smart Lock to keep it unlocked when docked.

While it is a nice-looking tablet, with few peers in this price range, I found the Smart Tab P10 a little uncomfortable to handle. That silvery strip around the edge is almost sharp and the glass back is cold and immediately covered in smudges that make it look dirty.

Once properly set up, you can just slide the P10 into the dock and it will switch into smart display mode. The dock itself has to be plugged in to a power outlet to work, so it’s designed to be in a fixed position in your kitchen or on the bedside table. It has an unobtrusive design with gray fabric concealing the speakers and controls on the right-hand side.

Put together the P10 and dock look good, the tablet is easy to slide in and out, and the pair will blend in easily in most environments.

I’ve set up countless Android devices over the years, but the Lenovo Smart Tab P10 stood out as one of the worst experiences I’ve ever had. It crashed more than once during the setup process. It also ran through the usual Android setup process from Google, but with Lenovo’s services and the Amazon Alexa setup on top. The three did not patiently take turns as you might hope.

I didn’t even restore a backup, preferring to try it as a fresh device and it still lagged and stuttered its way through a series of setup screens, then insisted it hadn’t completed setup yet. It took a couple of run throughs and restarts for me to get things straight. It also intermittently refused to download or update apps through the Play Store, something I could find no obvious reason for.

The Lenovo Smart Tab P10 is running Android 8.1 Oreo, rather than the most recent Android 9.0 Pie. It comes fairly barebones, which is a good thing. There’s the usual suite of Google apps but you’ll find Microsoft Outlook as the default email app. Skype is there too, but most of the 64GB is free for you to fill; there is room for a MicroSD card should you need one.

The Smart Tab P10 switches into Amazon’s simplified Show Mode when docked and set up correctly – more on that later. You can also skip out of Show Mode while docked, which allows you to do things like play YouTube, which Alexa can’t do. This is one of the potential reasons to buy it over a cheaper Amazon Echo Show.

Sadly, although you can set up and use Google Assistant on the P10, it doesn’t have a docked mode of its own. That’s a real shame because we really like the Lenovo Smart Display with Google Assistant.

As a veteran of Android tablets, I’m only too well aware of the dearth of decent devices. There are plenty of cheap, underpowered options out there, and they’re fine if you just read or stream movies on your tablet, but if you like to play the latest games they’re often not up to the task.

Sadly, the Lenovo Smart Tab P10 lived down to expectations. The Qualcomm Snapdragon 450 processor is slow. The P10 stutters and lags when switching between apps, and it’s slow to load games and even web pages. Bear in mind I’m testing the version with 4GB of RAM. I dread to think how the 2GB M10 runs.

I played Alto’s Odyssey which ran mostly without issue, so casual gamers needn’t worry. The busy Marvel Future Fight was much worse; it immediately suggested running in lower graphical quality and suffered from frequent dropped frames and slow loading. PUBG Mobile was just playable with the lowest graphical settings. The P10 is probably not a good choice for gamers.

Here are some benchmark scores:

Those scores are woefully behind the recent Apple iPad Air or Samsung Galaxy Tab S4, though those tablets are more expensive. The closest scoring device we’ve tested in terms of performance is the Moto G6, a budget phone from 2018.

The P10 stutters and lags when switching between apps, and it’s slow to load games and even web pages.

You are getting quite a lot for your money with the Lenovo Smart Tab P10, so compromises are to be expected, but I’d be lying if I said the slow performance didn’t annoy me. If you’re just going to watch movies, read on the web, and use the smart display mode, then this sluggishness will be much more tolerable.

Performs best as an Echo Show

When you dock the Lenovo Smart Tab P10, it serves as an Amazon Echo Show. Pogo pins supply the power and there’s a Bluetooth button to pair to the speaker. It pairs in seconds and switches into Show Mode, which is simplified software just like you’ll find on Amazon’s smart displays. It’s better as a smart display than as an Android tablet.

You get access to all the usual Alexa skills, you can use it to control your smart home devices, and it works as a display showing the time and weather. You can also stream from Prime Video, ask for recipes, or fire general queries at Alexa.

There are three far-field microphones, though I found that the Echo speaker at the other end of the room was quicker to respond than the P10 in front of me. However, it does respond eventually, and it works well as an Echo Show. The speaker is also enough to fill an average kitchen, which feels like the natural habitat of smart displays.

While the P10 serves well as an Echo Show, you could buy yourself the latest Echo Show from Amazon for $230, so why would you pay more for the P10? Well, you do have the option to pull down the notification shade and turn Show Mode off, which means you can use the P10 to run YouTube and fire queries at Google Assistant. You can also pick the tablet out of the dock and take it wherever you like.

The front-facing 5-megapixel camera is perfectly adequate for video calls. The 8-megapixel rear camera feels superfluous and I can’t help wondering if leaving it out would have enabled Lenovo to pack a slightly faster processor in – if so, it would be a smart trade. Your smartphone will almost certainly take better photos than the P10.

Battery is of no importance when the Lenovo Smart Tab P10 is docked, because the dock comes with a power cord and adapter and has to be connected to an outlet anyway. Battery life when you lift the tablet from its housing is actually solid. In our Full HD video streaming YouTube test, the P10 lasted a respectable 6 hours and 45 minutes.

It’s not a huge surprise that it outlasted the iPad Mini, which has a much smaller battery, but beating the latest iPad Air shows impressive stamina.

The Lenovo Smart Tab P10 comes with a standard one-year limited warranty covering parts and labor, the battery pack, and the dock.

The Lenovo Smart Tab P10 is a slow Android tablet, running dated software, but sporting a desirable design. If you’re primarily looking for a tablet, look elsewhere. The enticement to buy comes from the dock and the Show Mode functionality. While the concept is strong, the execution lets it down a little, but the P10 is unique right now.

If the smart display aspect is what really interests you, then you could pick up an Amazon Fire HD 10 with a Show Mode charging dock for as cheap as $190, or you could buy the latest Amazon Echo Show for $230. If you’re more of a Google person, then the Lenovo Smart Display at $200 is an option, or wait for the upcoming Nest Hub Max for $220.

If it’s really a tablet you’re after, then the Apple iPad at $330 is superior in every way.

As a 2-in-1, only the Fire HD 10 with Show Mode dock really competes, and I prefer the Lenovo Smart Tab P10, if only for the inclusion of full Android with Google Assistant. But it’s quite a jump in terms of price.

Lenovo Smart Tab P10 is glass front and back, so you’ll need to be careful if you want it to last. The dock seems sturdy, but the kitchen is a potentially hazardous environment for electronics. The real problem the P10 faces is longevity, as the slow processor may just get slacker, and there’s a dim chance of software updates.

No. Lenovo’s hybrid makes a good effort, but performance is an issue, as is the dated software. It’s only worth a buy if you’ve been pining for an Echo Show that can also access full Android and stream YouTube.