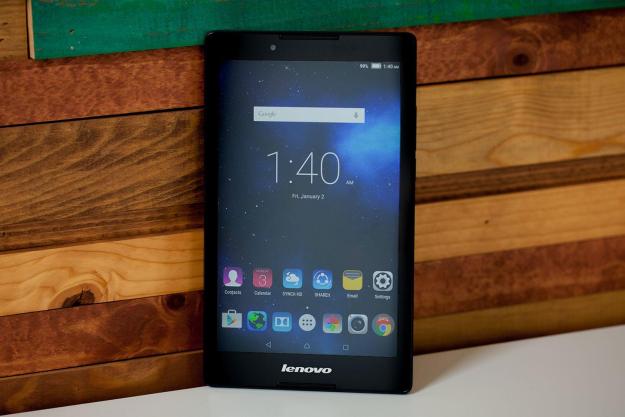 “The Lenovo Tab 2 A8-50 is perfect if you’re on a tight budget, but don’t expect the speed or perks of a high-end tablet.”

Lenovo recently updated it’s budget-friendly Tab 2 A Series line of Android tablets for 2015. With a better processor and a smaller footprint, the Tab 2 A8-50’s performance won’t blow you away, but there’s a good chance the price will.

At $130, you will have a hard time finding one that appears better value. However, there are inevitably some sacrifices made to achieve this price. A low-cost tablet isn’t designed to compete with flagship tablets, but does the Tab A8-50 perform well enough to buy at all?

A solid design for the money

Lenovo has always done a great job with its affordable hardware, and the Tab A8-50 is no exception. The body is made of plastic, but it’s not the cheap glossy kind that is found on most low-end devices. The back has a matt texture that provides a somewhat premium feel, along with the comfort of a solid grip.

The overall style hasn’t changed much from last year’s model, but you will find smaller bezels surrounding the screen. This has enabled Lenovo to reduce the overall size of the 8-inch tablet over last year’s model. It’s not by much, but it’s noticeable. The body has the same 8.9mm thickness as last year, it weighs 30 grams less than last year.

The Tab doesn’t offer any unusual or standout design features. The power button and volume rocker are on the right side, with the Micro USB port and headphone jack on the top. The back left side has a flap that’s easy to open, which houses the MicroSD slot. If you opted for the 4G LTE version of the Tab 2 A8-50, this is where you’ll also find the SIM card slot.

While we’re concentrating on the 8-inch model here, Lenovo also makes a 10-inch version for $220, and a 7-inch version is coming soon. All models are Midnight Blue.

Manufacturers are finally getting the hint that stereo speakers are the way to go, especially on high-end tablets. However, seeing them on an affordable tablet is refreshing to say the least. On the Tab 2 A8-50, the speakers are set at the top and bottom of the body, and they do more than just look good.

Lenovo has used Dolby Atmos Cinematic Moving Audio, which is made to give a surround sound-style experience while using headphones, but even on their own these speakers sound pretty darn good for the money. My only complaint is they aren’t as loud as I had hoped, but they are more than sufficient.

The audio’s good for movies and games, but what about the display? Its resolution is 1,280 x 800 pixels, which is fairly low for a modern 8-inch tablet display. The colors and viewing angles are more than adequate for a budget tablet.

It’s a MediaTek processor inside the the tablet, and the big change over the old model is this one is a 64-bit chip. That means it’s capable of running the very latest version of Android, which we’ll come back to shortly. Lenovo hasn’t altered the RAM though, and it sits at 1GB. The bottom line here is that the Tab 2 A8-50 won’t blow you away with blazing speed, but we weren’t really expecting it to, based on the price.

I found navigating the OS was often sluggish, and apps took a few extra seconds to open than expected. The touchscreen added to the problem, since it rarely recognized my tap on the first try. This was bad enough, but tablet performance can deteriorate over time, so what will it be like six months from now?

Worse still, Wi-Fi performance is even more frustrating. I noticed the download speeds while connected to what I thought was a good network were awfully slow, and even after trying three alternatives, downloads never topped 4Mbps. Other devices were able to achieve 30Mbps. To put this in perspective, 4Mbps is barely above typical 3G speeds on a cellular network. Interestingly enough, the upload speed didn’t have this limitation.

I can live with the low resolution screen, but the extra seconds to open an app or download a file or movie would soon get old. Lenovo may fix the Wi-Fi and touchscreen issues through a software update in the future, but it’s something for buyers to consider in the meantime.

There’s good news on the battery side. Lenovo’s estimation of 8 hours from the 4290mAh battery is conservative. I looped a video with the display brightness set to about 66-percent, while connected to Wi-Fi, and it lasted 8 hours and 29 minutes, which is impressive for a $130 tablet. Setting the display brightness at 50-percent yielded just under 9 hours.

If there is anything to complain about here, it’s that the MediaTek processor doesn’t support quick charging. It takes just under 3 hours to charge the battery from zero to 100 percent, which isn’t all that bad; but quick charging would have cut that time in half.

It’s unlikely you will use the Lenovo tablet as a main camera, but it does sport a 5-megapixel rear lens for those occasional situations in which you have nothing else to use. Just make sure the lighting is adequate and you’re not shooting a moving subject, because things can get ugly pretty fast.

The 2 megapixel front-facing camera won’t be much good for selfies, but its more than adequate for video chats

A near stock Android experience

It appears Lenovo’s purchase of Motorola is starting to payoff. Motorola is one of the few manufacturers that barely skins Android with its own user interface, and that has had a positive influence on Lenovo. Lenovo’s older devices had a custom user interface on top of Android that left a lot to be desired, but the Tab 2 A8-50 delivers a close to stock Android experience.

Unfortunately you won’t get the most recent version of Android, but it’s still Android 5.0, and an update brings it up to 5.0.2. The latest version of Android is 5.1.1, and there’s a chance Lenovo will upgrade the Tab 2 in the future.

Lenovo does include some proprietary software, but they don’t get in your way if you never use them.  What does it offer? SyncIt.HD is a tool for backing up contacts to the cloud or other important files to the MicroSD card, while ShareIt offers you the ability to send or receive files to and from other devices, including a PC — it also clones personal details from another machine, which may prove handy for new owners — providing the app is installed on both devices.

Other pre-installed apps include a simple sound recorder for recording meetings, and a built in music app for playing music files stored on the device or MicroSD card.

You get what you pay for, and that’s not a bad thing

The Lenovo Tab 2 A8-50 is good value at $130. It has a solid build, great sounding stereo speakers, a near stock Android experience, and great battery life. The performance holds it back from greatness, and it should definitely be considered a budget tablet with budget performance.