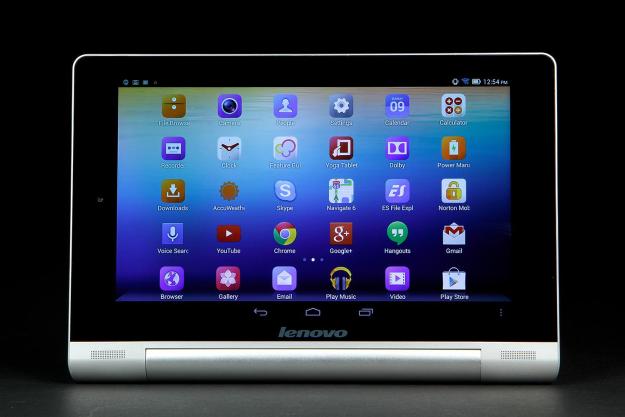 “The Yoga Tablet’s innovative kickstand and 14-hour battery life are fantastic, but its interface is ugly and buggy.”

Lenovo has been making Android tablets for a while now, but none of them have made an impact on this side of the Pacific. As is often the case, they weren’t compelling and the prices weren’t low enough to make up for it. With the Yoga Tablet, it hopes to change this. Borrowing the name from its convertible Windows 8 laptop of the same name, the first Android Yoga comes in your typical 8-inch and 10-inch screen sizes and hopes to snag a few of the millions of iPad, Nexus, and Kindle buyers out there. But can it?

Maybe, but it depends on your priorities.

Competing for the frugal crowd

Lenovo isn’t trying to attract the iPad Air or iPad Mini with Retina crowd. These are budget tablets at budget prices and they lack cutting edge specs. The Yoga tablet doesn’t have a 1080p Full HD screen, a powerful processor, or anything fancy like that. If those things matter to you, stop reading this review now. You’ll find nothing but unhappiness in the paragraphs ahead. Go look at a Nexus 7 ($230), LG G Pad ($350), or Nexus 10 ($400).

The new Yoga tablet costs $250 with an 8-inch screen and $300 with a 10-inch full-size screen and you get two big benefits: awesome battery life and a kickstand.

We could say plenty about the design of the Yoga Tablet, but there’s only one thing that sets it apart, and that’s the big fat cylinder on its side (or bottom, depending how you like to hold your tablet) and the aluminum kickstand that folds out of it.

The Yoga Tablet is the only slab that will hold itself up out of the box.

While a kickstand on a phone isn’t necessary (See: Evo 4G LTE), it’s almost a necessity on a tablet, but until now we’ve had to buy a case or use a prop to get them to stand. If you like to watch Hulu, Netflix, or any type of video on your tablet, the Yoga Tablet is the only slab that will hold itself up out of the box.

It’s easy to roll out the kickstand and you can adjust it to a bunch of different angles. We did have some issues with the 10-inch version because it has the same 1 or so inch size stand as its smaller sibling, which makes it unstable; even a light push on the screen will knock it over. But still, a wobbly kickstand is better than no kickstand at all.

You can also use the kickstand to set the tablet down at a low angle, which is good if you want to try and do some onscreen typing.

On a final note, while we like the kickstand, we wish that the Yoga Tablet’s stereo speakers were more competitive. Despite the inclusion of Dolby audio, music and video sound comes out flat and tinny. We tested our unit against a Nexus 7, Nexus 10, iPad 3, and Surface 2; it was outperformed by all of them by a wide margin.

There are a few different benefits of the cylindrical side of the Yoga Tablet, which is about as thick as an uncooked hot dog. (Sorry vegetarians … it’s also like a cylindrical piece of tofu that’s about the size of an uncooked hot dog. Does that help? Maybe a medium-sized carrot?) Our favorite was how much more comfortable it was to hold in portrait mode with one hand. Most of the weight is in that cylinder, which makes it light to hold and easy to grip with one hand.

Most tablets get about 8-10 hours of active battery life, but thanks again to the cylinder design, Lenovo was able to pack a 6000mAh battery in the 8-inch unit and a 9000mAh battery in the 10-inch. In our usage so far, we’ve squeezed about 13-14 hours of juice out of the 8-inch version. Lenovo claims these will get 18 hours of battery if you turn the screen brightness to 20 percent, but we’re skeptical. Regardless of the final number, you will get at least a few more hours out of this than any competing tablet. If battery life is a huge issue for you, then the Yoga Tablet should rise up your list.

The specs are about a year old

As you’d expect in a budget device, the Yoga Tab doesn’t have the newest, fanciest processors inside it. Both the 8- and 10-inch versions run on a 1.2GHz quad-core MTK 8125 central processor, a 1280 x 800 pixel LCD screen, 1GB of RAM, 16GB of internal memory for file storage (with a MicroSD slot that can handle a 64GB card), and Android 4.2 Jelly Bean, which isn’t as fancy as the new KitKat OS, but should do the trick for now. We hope an update will come.

Lenovo should have left Android alone and focused on hardware.

Still, scores aside, the Yoga performed well in our actual usage tests. If you open up a complex, demanding app or game, it may slow down, but doing casual things did not phase it too badly.

The camera isn’t great, but it’s okay for a tablet

Yoga Tablet’s 5-megapixel rear camera isn’t good, but it’s good enough. You shouldn’t buy a tablet for it’s camera and not even the iPad takes stunning shots, but we found Lenovo’s camera focused well and took better shots than we expected from a $250-$300 device. It also makes little camera noises when it focuses and shoots, which are subtle enough to be fun.

The big weakness here is low light and odd lighting. Shooting side-by-side with an iPhone 5S, areas where the Yoga Tablet sees nothing but black are visible and detailed on the iPhone.

The front-facing camera is only 1.6 megapixel, but is serviceable for a Skype call.

Lenovo’s downfall is its user interface

If you’ve made it this far in the review, you may be considering the Yoga Tablet. It sounds pretty good, right? Well, the big problem is the user interface. This runs on Android 4.2, but Lenovo, for some unearthly reason, decided to tinker with Google’s design, and every change it made makes the Yoga buggy or look bad.

It’s trying to look like iOS – old iOS: Like Samsung used to do before it got popular, Lenovo has shaped all its icons with rounded squares like an iPad or iPhone. Folders look like iOS 6, too. This is fine, but looks cheesy. In another Apply move, Lenovo removed the apps list and forces you to display all your apps on the home screen. This is fine once you get used to it, but anyone who buys a Yoga Tab thinking it’s going to be like the other 1 billion Android devices will find this off-putting. Apple fans won’t even get this far because they won’t tablet a second look after seeing its interface.

It’s buggy: Notifications are often cut off, as are the names of apps on the home screen. Little things like Wi-Fi being called “WLAN” and a lack of explanation about what Tilt Mode, Stand Mode, or Hold Mode are (these supposedly help manage battery life and experience) also confused us. Lenovo’s included “Navigate 6” app is also awful for navigation.

Some of these interface issues can be fixed by installing a good-looking launcher like Nova, but others cannot. Lenovo would have been ahead of the game to just leave Android as is and focus on hardware.

We want to like this tablet, but we can’t. As much as we’d love to recommend a tablet because Ashton Kutcher laid his two and a half hands on it, if you’re going to spend a few hundred dollars for a new device, you want the best you can get for your greenbacks. This ain’t it.

The battery life is great and the stand is useful, but the processing power of the Yoga Tablet doesn’t match cheaper competitors like the Nexus 7, and Lenovo’s user interface is ugly and buggy. We like the outside of the Yoga Tablet, but everything inside is disappointing.