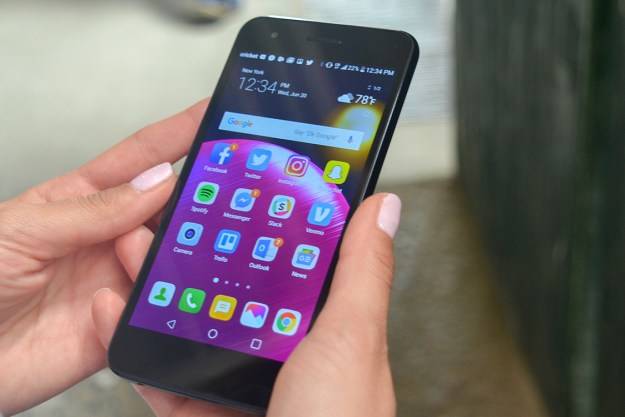 “The LG Fortune 2 faces stiff competition, and even for its low price tag, it simply doesn’t do enough.”

Good budget phones are a dime a dozen, but start creeping under $150 and lower, and your choices start to dwindle. Mobile Virtual Network Operators (MVNOs) like Boost Mobile and Cricket Wireless sell affordable data plans and phones you can’t get anywhere else. These phones can sometimes surprise us with their capabilities, but more often than not they offer poor performance and unusable cameras.

The LG Fortune 2 is no exception. Exclusive to Cricket Wireless, the Fortune 2 only costs $100, but it lacks features you can find on other $100 phones such as a fingerprint sensor. Performance isn’t terrible, but it can get frustrating, and you won’t want to share most of the photos that come out of its camera. It’s not all bad, though, as the display is solid, and so is the phone’s battery life. Let’s take a closer look.

Basic, but comfortable and lightweight

The LG Fortune 2 looks like a phone from 2015. It has incredibly chunky bezels on the front, a stark contrast from many of the phones releasing this year with slim edges around the screen. An earpiece and front-facing camera sit up top, and the corners of the front are rounded as well as the edges. It’s comfortable to hold and lightweight, with a 5-inch screen that’s big enough for watching videos and movies.

A volume rocker sits high on the left edge, which can be a little tough to reach, but the power button is on the rear, which is unique to LG. It’s easy to access. On the bottom is a 3.5mm headphone jack next to a MicroUSB charging port. We’d have liked to see the more universal USB Type-C port, but even Motorola hasn’t fully added it into its range of budget 2018 phones.

The 5-inch screen has a 16:9 aspect ratio, and a 1,280 x 720 pixel resolution. The screen is vibrant and colorful, and we didn’t have much trouble seeing content in direct sunlight. Despite the lower resolution, images and text look sharp, and we were satisfied watching videos on this screen.

Despite the lower resolution, images and text look sharp, and we were satisfied watching videos on this screen.

Head over to the back, and the Fortune 2 isn’t terribly unattractive. There’s a lot going on, with a single-lens camera sitting high up top, as well as a flash and power below. There’s also the LG logo, along with a Cricket Wireless logo. On the left bottom corner is the phone’s only speaker. This is as basic as smartphone design gets, but we’re not expecting much for a $100 phone. The gray color is a little dull, but we do like the textured pattern.

When listening to music using the speaker while holding the phone, we sometimes ended up blocking the sound, which is a little frustrating. We wish LG opted for a front-facing speaker instead, especially since there’s plenty of space with those bezels. As for sound quality, the Fortune 2 doesn’t get loud enough to hear outdoors with lots of ambient noise, but it should be plenty loud indoors. The audio sounds surprisingly decent, though it’s still a tad muffled at louder volumes. You’re better off plugging in earbuds or getting a cheap Bluetooth speaker.

It’s unfortunate that the power button doesn’t double as a fingerprint sensor, unlike many other LG smartphones. The Alcatel 1X Android Go smartphone costs $100 and manages to include a fingerprint sensor, so we’d have liked to see one here as well. it’s tough to break the habit of constantly placing our finger on the lock button to gain access to our phone, and who wants to use pins anymore?

The Fortune 2 is powered by Qualcomm’s Snapdragon 425 processor with 2GB of RAM. Scrolling through the user interface isn’t fluid, and apps are slow to open. It’s all manageable, but you may get frustrated when scrolling through apps like Facebook, or when you open apps like Twitter or Instagram and refresh the feed after a long day of not checking in. We didn’t run into any problems that rendered the phone unusable, and we easily lost track of time playing The Sims Mobile without any issues.

Accessing the Settings menu is a little sluggish. When searching through or tapping on a section, we sometimes had to wait for menus to fully load, which could take a few seconds.

The AnTuTu score sits right below phones with the slightly-better Snapdragon 430 processor, like the Moto G6 Play. Benchmark scores are good for comparisons, but they don’t reflect real-world performance. In our experience, the LG Fortune 2 is a decent performer for people who use their smartphones lightly — to message others, place calls, and use a few social media apps.

We downloaded our most-used apps on the device, and we noticed the more we tacked on, the slower the phone became. If you’re a power user that cycles through multiple apps, or if you like to use intensive apps, you may want a budget phone that’s a little more powerful like the Nokia 6.1.

One problem we do have with the phone’s specifications is the amount of storage provided. You only get 16GB, and it’s incredibly easy to fill that space up. Thankfully, the Fortune 2 does have a Smart Cleaning feature that optimizes storage, and you can save more space if you use a service like Google Photos. There is a MicroSD card slot that lets you add up to 32GB of additional storage.

The LG Fortune 2 runs Android 7.0 Nougat — specifically 7.1.2 which was the last update to come to the 2017 operating system. It’s disappointing to see this phone launch without the latest version of Android, and it’s soon going to be out of date by two versions when Android 9.0 P releases in August. It’s unacceptable, even if the phone costs $100. Don’t expect to get any updates.

It’s disappointing to see this phone launch without the latest version of Android.

The software experience is similar to other LG phones. It’s simple to use, it looks contemporary, and there are a few customization options. LG’s KnockON feature turns the display on when you double tap the screen, which is handy when the phone is resting on a table.

What we don’t like so much is the amount of bloatware that’s pre-installed. You’ll be dealing with apps like Deezer, Final Fantasy XV, TopBuzz Lite, and Yahoo! Finance, which is annoying. Thankfully, it’s easy to uninstall all of them other than Visual Voicemail and the myCricket app.

The camera is always the Achilles’ heel on budget smartphones, especially in low-light environments. The LG Fortune 2 is no different. The 8-megapixel rear-facing camera can take some respectable photos in broad daylight, but it starts to churn out less than ideal results as soon as the sun starts to go down.

Even with decent lighting, images start to get grainy, fuzzy, and blurry. This is exacerbated in low light. Any overhead lighting overpowers the entire scene, ultimately making the photos unrecognizable.

With a 5-megapixel front-facing camera, selfies look good when you look at them at a distance. Look closer and you’ll see that they too are blurry and grainy. Even with lots of natural light, selfies end up looking a bit washed out.

The camera app itself is surprisingly quick to open, and snapping a photo is swift. It’s a shame many of the results from the camera aren’t good enough to share anywhere.

With a 2,500mAh battery powering the LG Fortune 2, we were able to get a full day out of the smartphone. That includes emails notifications, using social media, taking photos, and messaging. On average, we found that our device was at about 85 percent by noon (having taken it off the charger at about 8:45 a.m.), and by the end of the workday at 5 p.m., it was around 68 percent.

This phone can probably last a little more on a second day, but otherwise you should be able to comfortably use this phone for a full day.

By 8 p.m., the phone hit 49 percent — this was after using it more on our commute home followed by running errands, as we caught up on Instagram, news, and simultaneously listened to music on Spotify. By the time we got ready for bed at around midnight, the Fortune 2 sat at 28 percent. Not bad. With lighter use, this phone can probably last a little more on a second day, but otherwise you should comfortably be able to use this phone for a full day.

The LG Fortune 2 costs $100, and it’s only available through Cricket Wireless.

LG offers a one-year limited warranty that covers defects in material and workmanship. It doesn’t cover any accidental damage or wear and tear to the device. If you need warranty service, you’ll need to ship your device to LG’s customer service department.

The LG Fortune 2 faces stiff competition, and even for its low price tag, it simply doesn’t do enough.

Yes. We’re currently in the process of testing the Nokia 3.1, which costs $150, as well as the Moto E5 Play (known as the Moto E5 Cruise on Cricket for $100). We can say for certain that both of these phones will offer you better value for the money over the LG Fortune 2.

The LG Fortune 2 is made of plastic so you won’t have to worry about shattering it easily, though you still may want to nab a case. Since it is unlikely to receive any software updates, and performance will wane the more you use it, we expect the phone to last a year or two before you’ll want to upgrade it.