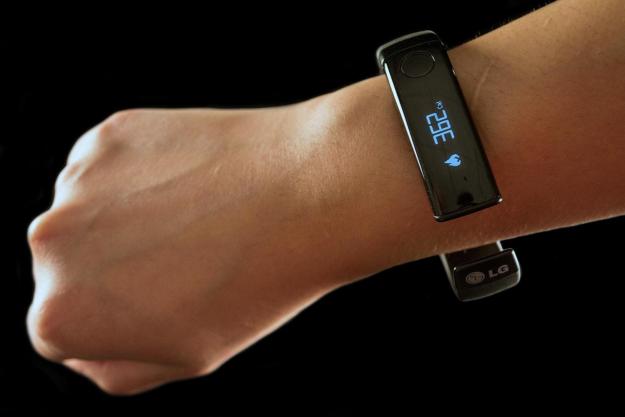 “LG’s Lifeband Touch tracks all the right vitals and looks sharp, but a weak display that becomes almost useless in the sun will prevent serious athletes from considering it.”

The brand LG most often brings to mind monstrous OLED TVs, stylishly home appliances, and smartphones. But with the launch of its Lifeband Touch fitness tracker, the South Korean electronics giant is sending notice to the the world that they’re intent on joining Fitbit, Jawbone, Garmin, and Samsung in the wearable-fitness technology game.

The LG Lifeband Touch is a shiny chunk of techno jewelry that wouldn’t be out of place on the set of a sci-fi movie. Like Nike’s soon-to-be discontinued Fuelband, the Touch takes up substantial real estate on the wrist. It is not a tiny silicone strap that hides away on a wrist under a sleeve and tracks steps. Like the Fuelband, the Touch is more bangle than fitness band. There is no clasp or closure on the Lifeband. Rather, it is an open, flexible bracelet with a gap allowing users to slip it over their wrist where it hangs loosely. Because it is not adjustable, the Touch comes in two sizes: medium is 6.5 inches and large is 7.1 inches around.

The Touch features a blue 128 x 32 resolution OLED touch screen display and one menu button which is encircled by a LED light band. Like other fitness trackers, the Lifeband Touch features an on-board three-axis accelerometer and altimeter and communicates with LG’s Android and iOS Fitness app via Bluetooth.

By clicking the menu button, users can scroll through three different modes: time, activity, and music control. Getting around inside each mode requires swiping across the touchscreen display to the left or right. Time mode displays the time, date, and how much battery power is left. In Activity mode, users can swipe through calories (total burned and goal), distance traveled, steps taken, and what LG calls Workout. Workout tracks those same activity metrics during a specific time. Once a workout has been started, swiping across the touchscreen delivers time, calories, distance, number of steps, speed, pace, and with the proper heart-rate monitor and smartphone, current heart rate.

While LG’s Fitness app contains a wide range of features and runs on iOS 6 or later and Android 4.3, the Lifeband Touch also works well with other popular smartphone fitness apps like MapMyRun and RunKeeper.

The LG Lifeband Touch arrives with the wrist bangle, a USB charging cable and an adapter that allows the USB cord to connect to the Lifeband. The packaging also includes a detailed, helpful, quick setup guide that makes getting started very straight forward.

While the LG Lifeband Touch will count steps, calories burned, and record workouts without being paired to the smartphone, the real power in the device comes from being connected to the LG Fitness app. While connected to the app, the Touch can track workouts via the phone’s GPS and map the entire activity just like a GPS-powered fitness watch.

The display is moderately visible indoors and looks brilliant at night, but out in daytime air it is unreadable.

After downloading and launching the LG Fitness app, everything was extremely straightforward. The app walks us through the sign-up and pairing process with detailed instructions that make getting started surprisingly simple. Once the Touch is registered and paired with the phone, LG asks for personal profile details like gender, age, height, and weight and then it’s ready to go. The simplicity and detailed instructions were refreshing.

On our first outing with the Touch we were surprised to find that the display, which LG describes as a “bright OLED touchscreen,” is complete unreadable in broad daylight. The coating on the Touch’s display is so reflective and the OLED so dim that it is impossible to see anything on the display. In fact, pretty much anywhere we were outdoors during the day the display was nothing but reflections of whatever was around. The display is moderately visible indoors and looks brilliant at night, but out in daytime air it is unreadable. That’s a bummer, because one of the coolest things about wearing a connected device is the ability to quickly check fitness stats without having to get out a phone. With the Lifeband, that was nearly impossible. During a run, we were constantly forced to search for a shady spot when we wanted to check current stats, and then the display was only visible if we blocked the light with our other hand.

One of the other features that we have come to depend on with other fitness bands is a vibration alarm. The LG Lifeband Touch includes a vibration alarm and allows for up to five different recurring vibration alarms to be set via the Fitness App. The Touch can also be set to vibrate when a call comes in on a connected phone and even show caller ID info on Android phones (caller info for iOS is reportedly in the works). The problem was, the vibration was so light that it was nearly impossible to feel. The first two times we tested the alarm we missed the vibration entirely. While it worked OK when we were sitting at our desk, when out and about it was imperceptible. This may be a result of the band fitting so loosely on the wrist, or that the vibration motor is just too small, but either way it made us unable to depend on the Touch for notifications or alarms of any kind.

We also had trouble with getting the music control mode to function. At first we were convinced that it didn’t even work until we accidentally touched the screen several millimeters away from where the play button showed on the display. Turns out the touch screen control on our demo unit did not line up with the graphics that allowed us to start and stop the music. To start the music we had to tap our finger way out to the side of the play button to get the Touch to start the music. Once we found the sweet spot for the play button, we were able to control the music on our iPhone 5 well. Unfortunately, when we were outdoors, where using the remote control could be most useful, we had a hard time seeing if we were even in music control mode.

LG has solved one problem we’ve had with other trackers that do not have always-on displays. They use the Touch’s accelerometer to control when the display turns on. Want to check the time or a most recent stat, all it takes is a flip of the wrist and the display pops to life.

The LG Lifeband Touch is an attractive, full-featured fitness-tracking band. It is solidly built and works well with the LG Fitness smartphone app. In fact, we had no complaints with the app, nor the way the Lifeband Touch interacted with it. LG has done a solid job creating an ecosystem to track fitness. Sadly, we could not get past the Lifeband Touch’s display problems. Because the screen was unreadable, we were constantly forced to check our fitness metrics on our phone. And while we’ve enjoyed using fitness trackers that do not have detailed displays in the past (like the FitBit Flex), the Lifeband Touch took up too much room on the wrist to not deliver any usable data.

Those who spend most of their time indoors and don’t mind a fitness bracelet that hangs loosely on the wrist and may find the Lifeband Touch a perfect fit. But until LG improves the display and the fit of the Touch, we’ll just download LG’s free Fitness app and leave it at that.

The Lifeband Touch retails for $150.

Apple Watch Memorial Day Sale: Save on the Series 7 and more

The best Garmin watches of 2022