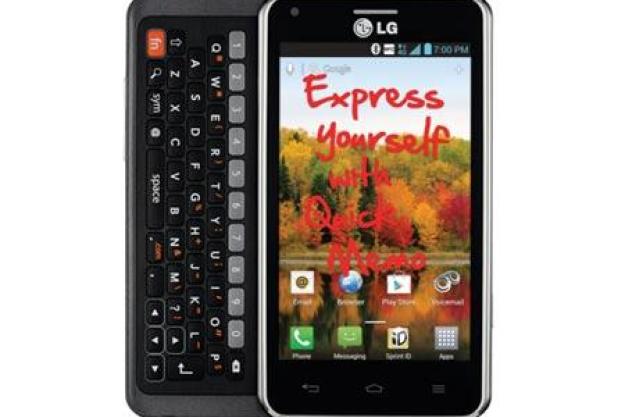 “The LG Mach's keyboard does not match the Motorola Photon Q ($200), and it's plastic construction and low-res screen do not impress, but LG's Android user interface is speedy. If saving $100 is important to you, the Mach may be a better choice, but aside from the keyboard, there are few compelling reasons to choose it over other Sprint phones, including LG's own Optimus G ($200) or the HTC EVO 4G LTE (also $100).”

There are fewer and fewer smartphones like the sliding LG Mach on the market today. Only a few years ago, a physical keyboard seemed a necessity for a device designed for sending texts, emails, instant messages, and other typing-heavy activities. Unfortunately for fans of QWERTY, much improved on-screen keyboards, and the trend to larger screened phones have led to slim pickings for those who prefer physical keys.

The Mach offers this benefit plus a low price of $100, with a two-year contract. Unfortunately, those are about the only two features that it has going for it. If your budget is small, should you choose this phone over more expensive sliders available on Sprint? Read on to find out.

A keyboard slider isn’t going to win thin and light contests in the smartphone world, but the LG Mach is pretty svelte for a phone of this type. It measures 0.48 inches thick with a 4.6 x 2.6 inch footprint but weighs more than you’d think just by looking (5.9 ounces).

This phone also won’t win any beauty contests. The design is utilitarian and, while not ugly, it’s not attractive either. The faux brushed-metal back and chrome band around the edge keep it from looking like it’s made from plastic (it is). The back edge is beveled enough to make it comfortable in the hand both when the keyboard is out and when it’s not.

Sliding the keyboard out is easy and the hinge feels sturdy enough to handle thousands of uses.

In addition to the power button on top and the volume toggle on the left side, there’s also a shutter button for the camera. The Micro USB port is on the left and the microSD slot can be found under the battery cover. A small speaker sits on the back in a corner and delivers tinny sound that’s muffled if you set the Mach on a table.

Though this is an Ice Cream Sandwich phone, the Mach has capacitive Back, Home, and Menu buttons below the screen instead of utilizing the operating system’s on-screen buttons. To access the Recent Apps drawer, tap and hold the Home button.

The 4-inch screen means that the Mach sports a well-sized keyboard, though the keys don’t quite fill the available space. Overall, the layout is good with only a few missteps. We’re glad to see a dedicated number row along the top and arrow keys, and we also like that the comma gets its own key, unlike the first generation Samsung Stratosphere. The Space bar needs to be wider – we accidentally hit the period key a few times while typing fast. We prefer the Motorola Photon Q’s layout, which has a spacious … space bar.

We also couldn’t type as fast as we’re used to thanks to the stiffness of the keys. It took more work to press them, slowing us down. Things improved the more we got used to the keys, but speed typers may not like the overall experience.

(Side note: People with fingernails will appreciate that the pillowed keys aren’t too rounded and have a matte coating so nails don’t slip off.)

The LG Mach ships with Android 4.0 (Ice Cream Sandwich). The company is mum on whether or when it will get an upgrade to 4.1 (Jelly Bean). The new custom user interface LG layers on top of Android (this has the same one as the Optimus G) isn’t as extensive as Samsung’s TouchWiz UI or HTC’s Sense, but it is clean and has some nice eye candy on the unlock screen and in the homescreen animations. Beyond that, there’s not much flair or differentiation from competitors.

There are a few nice touches. We always appreciate a Lock screen that allows users to swipe to open an app right away, choose the apps listed, and customize the look. Users can also customize the Home screen swipe animations. In the Notifications drawer you have access to Quick Settings at the top, and it’s possible to edit which settings to put in the four slots.

Still, some of LG’s additions and features felt too much like those found on competing phones. For instance, QuickMemo turns your screen into a notepad, allowing users to quickly write a note – convenient for writing down numbers on the fly. Despite the lack of pen, we like this feature. LG also included a few motion gestures, such as the ability to snooze an alarm, mute incoming calls, or pause video by turning the phone screen down. We don’t object to these additions – they can prove useful – it’s just that Samsung does them better.

Though the Mach has a physical keyboard, we appreciate that the on-screen keyboard isn’t difficult to use when needed. It’s big enough to use on the 4-inch screen and accurate, with decent word suggestions. The text prediction engine is also active when using the physical keyboard – a nice touch.

The LG Mach is powered by a 1.2GHz dual-core Snapdragon S4 Plus processor with 8GB of internal storage. It’s capable of running on Sprint’s 4G LTE network. When not present, it falls back to 3G.

In our hands-on tests, the Mach performed well, opening apps quickly and responding to swipes without delay. We also saw high frame rates on games and video. On the Quadrant Benchmark test it averaged a score of 5,300, which is just above the Motorola Photon Q (around 5,000).

The one slow aspect of the phone is Sprint’s 3G connection. We tested the speed in New York City, Boston, and outlying suburbs. The fastest download speed we recorded was 0.59Mbps and the fastest upload speed got to 0.63Mbps. The Mach should be much faster on LTE, but we didn’t hit any areas with that service active during testing. (Sprint is still rolling out its LTE network.)

The 4-inch display isn’t served well by the low 800 x 480 pixel resolution. Budget phone or not, this is disappointing. We’d expect at least 960 x 540 pixels these days. The lack of pixels is especially noticeable when looking at text. At least the IPS screen offers rich colors and wide viewing angles.

The rest of the specs are standard: Micro USB port, headphone jack, and a microSD card reader that supports cards up to 32GB. Beyond Wi-Fi, you also get Bluetooth 4.0, GPS, and NFC.

The 1,700mAh battery offers good but not stunning longevity. We were frequently able to get through an entire day with medium to heavy usage and around 7.5 hours with heavy usage. Unlike the Photon Q, the Mach only sips power when idling, which means your battery shouldn’t die on you when you’re not using the phone.

Pictures produced by the 5-megapixel rear-facing camera aren’t very impressive. Shots captured outside or in decent light are color rich, though lack crispness. Indoor shots contain noticeable noise. After adjusting white balance, pictures still come out with more of a yellow tinge than they should.

The camera app offers quite a few settings and options for adjusting the shot, including exposure control, white balance, and HDR. These help a little, just not enough. We do like the Smile Shot feature that takes a picture when you say “smile.”

The 0.3-megapixel (VGA) camera on the front is the bare minimum required for a decent video chat, but don’t expect much in low light.

We experienced only so-so call quality during testing. Voices coming through the earpiece lacked clarity and the speaker produced tinny voices. On the other end, callers reported that our voices came through clearly, even in noisy environments.

The LG Mach’s keyboard does not match the Motorola Photon Q ($200), and it’s plastic construction and low-res screen do not impress, but LG’s Android user interface is speedy. If saving $100 is important to you, the Mach may be a better choice, but aside from the keyboard, there are few compelling reasons to choose it over other Sprint phones, including LG’s own Optimus G ($200) or the HTC EVO 4G LTE (also $100).