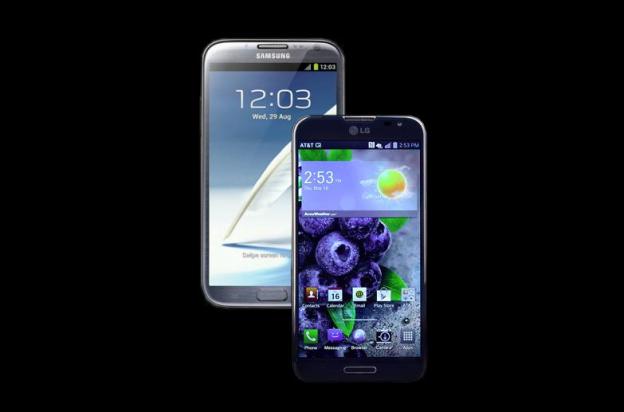 LG’s Optimus G Pro is finally available in the U.S. after months of hanging out overseas, taunting us with its big screen goodness. We already have a few giant phones to pick from, but let’s be honest: the LG Intuition wasn’t ever anyone’s real preference, was it? No, the king of the king-sized smartphones is the Samsung Galaxy Note 2. 5.5-inches, quad-core power, and a digitized stylus all make it a popular choice. Can LG’s 5.5-incher topple Samsung’s baby off the pedestal? Let’s compare the major features, hardware, and user experience point-by-point to see which of these phones is worthy of weighing your pants pocket down.

(Read our full review of the Optimus G Pro and the Galaxy Note 2 for more details about these Android smartphones.)

There’s no getting around the fact that the Optimus G Pro and the Galaxy Note 2 are both big phones. However, we have to give LG credit for slimming down the sides and narrowing the bezel around the giant 5.5-inch display. Though it’s only thinner than the Note by a few millimeters, the Optimus is noticeably easier to grip and more natural to hold. Unfortunately, LG loses what it gains in the compact size with awkward button placement. The volume rocker is too far down on the left side to easily reach and the Q button above it is superfluous. Both phones have a physical Home button flanked by capacitive Back and Menu buttons and we find that have Back on the right side is more comfortable for right-handed users. Having to reach across a big phone to get at one of most used buttons is awkward in comparison.

The 5.5-inch displays are both bright and colorful with wide viewing angles. The Galaxy Note 2’s screen is brighter when compared side-by-side and its colors richer. Viewing angles are also a bit wider, though you can only tell when looking at both screens at extreme angles. The Optimus G Pro takes better advantage of the display size by including a full HD resolution. This means crisper text at tiny sizes and 1080p video without compromising a pixel, though those differences are mainly academic. We do like that at this resolution LG felt comfortable giving the Home screens and app drawer a 5 x 5 grid, meaning you can fit more icons and widgets than on the Note 2, which has a 4×4 grid like most Android smartphones. (The original Note had a 5 x 5 grid and we much preferred that.) Beyond just how the screens look there’s the Wacom technology that powers the Note 2’s S Pen, adding more functionality to the screen. Drawing and writing notes is nice, hovering the pen over the screen for extra info and more computer-like web navigation is better.

The Optimus G Pro doesn’t come with a pen or stylus, but you might assume so from all the pen-based apps and features incorporated into the UI. Q Memo even gets a dedicated button by default (it’s user-changeable); pressing it brings up a layer over the screen for scribbling notes. LG also -pre-loads a couple of notebook and note-taking apps and hidden in the keyboard is a handwriting recognition input area. All of this would be so much better with a precise pen. They work all right with a capacitive stylus and are passable using a finger (except the handwriting recognition — that is terrible). It feels like LG is trying too hard to copy Samsung in this regard.

Meanwhile, the Note more than lives up to its name. The S Pen digitized stylus is useful for getting around Android thanks to some nice gestures from Samsung, but obviously it’s meant for people who still like to jot things down by hand. S Note is the perfect companion for the pen and creates notes that mix handwriting text, images, even voice. Additionally, there is a growing number of note apps available optimized to work with the S Pen, including Evernote’s Skitch and Catch Notes.

Both phones run a version of Android Jelly Bean 4.1 heavily skinned by a custom interface. Aesthetically, we prefer LG’s design to Samsung’s, which looks a little too Fisher-Price for our taste. LG’s skin has quite a bit of fun eye candy that is user customizable to some extent and doesn’t impact performance. The downside is that the software features and skin elements are so voluminous that some areas feel overstuffed; example the Notification shade. It’s clear that LG took inspiration from Samsung and HTC when designing the skin and added all the features someone thought were the best without really thinking about whether they were necessary.

Samsung has built up TouchWiz and its features over time so they feel less like someone threw spaghetti at the wall and more intentional. It does at times feel like there is too much going on, everything is integrated in a much less annoying way. You might not use every Samsung app, service, or option on the Galaxy Note 2, but most users will benefit from an advanced experience using at least one of them and the others don’t get in the way or can be turned off.

With screens this size owners will get a good gaming and video watching experience on either phone. The full HD display on the Optimus G Pro means a slightly better experience in that regard, though at 5.5 inches most eyes won’t be able to detect it. The Optimus pulls ahead in this category thanks to the integrated IR blaster and Quick Remote app for controlling TVs and media boxes. This feature makes it an even better second screen when settled on the couch. Still, we lament the absence of the TV antenna from the international version of the device.

The Galaxy Note 2 comes equipped with AllShare, Samsung’s DLNA technology. This makes it possible to share the OS, video, and music from the phone to a Samsung tablet, computer, Smart TV, or the AllShare Cast Hub. That feature only works with Samsung products and is more limiting than the IR blaster. (We fully expect that feature to come with the Galaxy Note 3 when it’s announced).

It’s always tempting to assume that a phone camera with more megapixels must be superior to those with less. We’ve had ample proof that this isn’t true recently, with HTC and the iPhone proving that it’s not how many megapixels you have, but what you do with them. Comparing shots from these two phones is another example. Though the Galaxy Note 2 has 8-megapixels to the Optimus G Pro’s 13, the Note performs better in low light, offering a crisper picture when viewed at full size. When we took pictures in a colorful environment with good light, the image from the Optimus popped more and looks truer to life. Neither of these phones will give you print-worthy images; for sharing on social networks and the web, they’ll serve well.

The Optimus G Pro was one of the first smartphones we tested that scored over 12,000 points on the quadrant benchmark. It achieved that mighty feat thanks to a 1.7GHz quad-core processor and 2GB of RAM. The Galaxy Note 2 also has a quad core processor (1.6GHz) and 2GB of RAM, but scored just shy of 6,000 on Quadrant, half of the Optimus. Benchmarks don’t tell the whole story, of course. In our experience using the phones, the Optimus is just a hair smoother when swiping around Android. Playing games reveals slightly higher framerates as well. If you’re not playing power-intensive games you probably won’t notice. The extra performance will likely give the Optimus G Pro a slightly longer life as apps grow ever more complex.

Now that the U.S. variant of the Optimus G Pro is out, we tested it on AT&T’s network to determine how the large battery holds up while running on an LTE network all day. At the end of 12 hours of medium to heavy usage the battery was just giving out, and that’s without any power saving measures employed. That’s a great result for a big phone. The Galaxy Note 2 looks at you at the end of 12 hours and asks when the party is going to start. In testing, we were able to get 15 – 16 hours out of the phone before it dropped to 15 percent battery and, if we were conservative by hopping on Wi-Fi when available and keeping the brightness down around 20 percent, it is possible to go two days without needing a charge.

The Galaxy Note 2 launched on all nationwide major carriers and some regional carriers as well. Pricing varies, with AT&T and Verizon Wireless selling it for $300, Sprint offering it for $200, and T-Mobile udercutting everyone at $150. All prices are either on contract or down payment. It’s possible to get a Note no matter the carrier at a wide range of prices.

The Optimus G Pro is only available on AT&T for $200 on contract.

The Samsung Galaxy Note 2 holds up pretty well in a head-to-head competition with the Optimus G Pro even though it’s months older. The S Pen gives the Note a big advantage in precision navigation, note taking, and extra features. The display might not be full HD, but is brighter and more color-rich. The interface is a bit less crowded than LG’s, and the longer battery life is a huge plus.

That said, the LG Optimus G Pro is superior in key areas like performance and display resolution. We can’t discount how much more comfortable it is to hold than the Note 2, and we like that LG takes advantage of the screen size more. An all-day battery is good enough for most users, and it’s impressive how much you can squeeze out given the display size and power. If only LG would streamline their interface…

The Optimus G Pro might be worth switching to AT&T for if you’re unhappy with your current carrier. If you aren’t, then no switching is necessary to snag a Galaxy Note 2. That convenience will probably make the decision for most people.

Which of these giant smartphones would you choose?

Video-editing app LumaFusion to get a Galaxy Tab S8 launch
Best Buy is having a giant Samsung Galaxy Tab sale today
Best Apple deals and sales for October 2022
The best phones for 2022: Which smartphone should you buy?
Does the iPhone 14 have an always-on display? Know this before buying
Stage Manager is coming to older iPad Pro models after all
Samsung just copy-and-pasted iOS 16’s lock screen in its One UI 5 beta
First Samsung Galaxy S23 design leak shows a floating camera bump
Here’s what AT&T is doing to keep your phone working during Hurricane Ian
Google Pixel Watch: news, price, specs, release, and more
Oura goes back to basics with its classy new Horizon smart ring design
How Spotify audiobooks work (and how much they cost)
Truecaller brings AI-powered spam call filtering to any iOS or Android phone