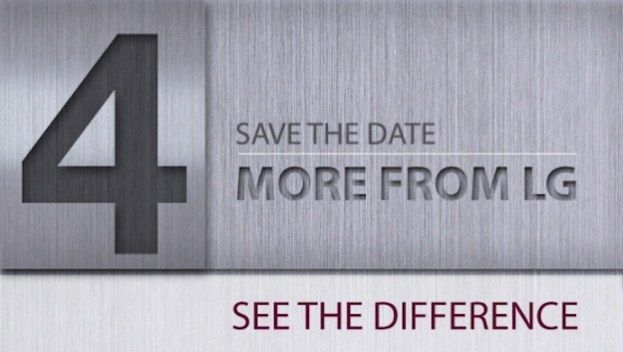 LG better be supplying the coffee on February 25, as it has scheduled its Mobile World Congress press conference for a very bright and early 8am local time. The company has been teasing us mercilessly over the past few days concerning what it may reveal at the Barcelona trade show, culminating in today’s invitation and a new Cover picture on its Facebook page, telling us we should, “Stay tuned for a world of difference at MWC 2013.”

The overriding feature of the invitation is a massive number 4 in the corner, which is followed by the words, “More from LG,” from which we can deduce it will be unveiling four new devices. In one of its previous teaser shots, LG told us a new series of phones would be at the show, which could account for some or all of that figure.

GSMArena found a hint of what this new series would be in an LG press release, where it talked about its financial results for the final quarter of 2012. Towards the end of the statement, it was stated the company, “Plans to increase smartphone revenues and market share by launching follow-up devices to Optimus G and the L Series as well as the new F Series.”

Three L or F Series and one Optimus G Pro?

We’ve already heard about the Optimus G2 and it’s not expected to make an appearance at Mobile World Congress, however the bulk of the L Series was introduced at MWC in 2012, making it a logical possibility for a refresh at the 2013 show. As for the F Series, it’s speculated they will be affordable phones with 4G LTE connectivity.

During CES 2013, LG confirmed it would be bringing out a variety of new smartphones over the coming year, so it’s not clear whether the L Series or the F Series will be at MWC.

There has also been more talk about the rumored 5.5-inch version of the Full HD Optimus G Pro, a device which may also make its debut in Spain, as a picture showing the phone has been leaked. While the pictured phone doesn’t look all that different from the Japanese Optimus G Pro, on the inside it could have a larger 3140mAh battery; however the rest of the spec will probably match the 5-inch model, so expect a 1.7GHz quad-core processor, 2GB of RAM and a 13-megapixel camera.

If this Galaxy Note 2 challenger is one of LG’s surprises, then whichever series of phones joins it on stage will presumably be made up of three models. With LG taking the 8am slot on February 25 and Nokia showcasing its own new products an hour later at 9am, it’s shaping up to be a very busy first day at Mobile World Congress.