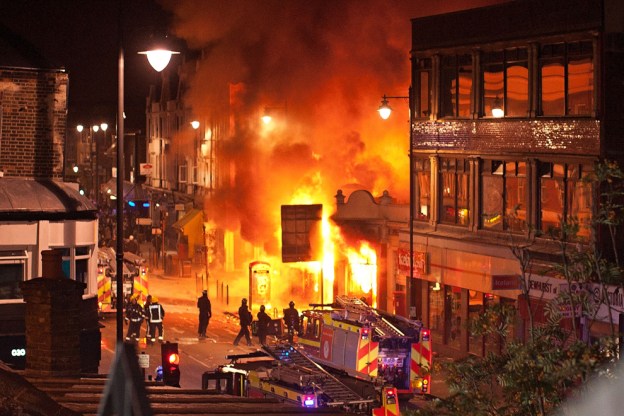 This year oppressed people worldwide have been using communication technology and social networking to combat their restrictive governments. Demonstrators in countries like Egypt, Libya, and Syria used YouTube, cell phones, Facebook, and Twitter to organize their protests as well as communicate their fight to the outside world.

Now, Londoners are using BlackBerry Messenger for their own anti-government purposes. While the developed nation isn’t fighting for the same freedoms, citizens are using the private messaging application to voice their outrage over the controversial police shooting of Mark Duggan.

Last Thursday, 29-year-old Duggan was an alleged gangster and drug dealer who was shot and killed by London police after a minicab he was riding in was stopped by officers. Those close to Duggan claim he was unarmed and that officers with submachine guns opened fire and killed him. Soon after vigils turned to anger, anger to protests, and protests to looting and violence directed toward Scotland Yard.

The demonstrations have continued and authorities have been looking to the likes of Facebook and Twitter to see if they are being used as part of the effort. But blogger and media strategist Jonathan Akuwe was the first to point to BlackBerry Messenger. “BBM as it is known, is an instant messenger system that has become popular for three main reasons: It’s fast (naturally), it’s virtually free, and unlike Twitter or Facebook, it’s private.”

Akuwe says that since the morning of Duggan’s death, BBMs have been spreading and were “the channel used to spread the word that the riot had started, and from what I can tell on Twitter, it appears to be the means by which communications continue to be shared.” The Telegraph says that shortly before his death, Duggan sent a BBM to his girlfriend saying, “The Feds are following me.”

Since then, the BBMs regarding Duggan’s death and the ensuring riots have gone viral. The Guardian was shown one message by a recipient which read, “Everyone in Edmonton, Enfield, Wood Green, everyone in north London, link up at Enfield train station at 4pm.” It detailed what items to being–including hammers–for the demonstrations.

The advantage users have with BBM is that the news continues to circulate, but is covert enough that it is difficult to trace. BBMs are encrypted and hacking this network would be incredibly difficult, so protestors are able to stay a step ahead of authorities.

RIM UK has stated that it will help Scotland Yard in any way it can, so the BBM may only have so long to live as a tool for rioters. But most of them are of the young, mobile-minded, tech-savvy generation, and there are a variety of tools at their disposal.

Topics
Video-editing app LumaFusion to get a Galaxy Tab S8 launch
There’s still time to shop these Kindle Black Friday deals
The best 12.9-inch iPad Pro Black Friday deal we found is still available
Google Pixel Watch Black Friday deal hasn’t ended yet – save $50
There’s still time to get 3 months of Kindle Unlimited for $1
Apple Cyber Monday Deals: Apple Watch, AirPods, iPad, MacBook
Get these JBL earbuds and 4 months of Music Unlimited for $25
OnePlus’ new Android update policy matches Samsung, shames Google
How Apple can fix iOS 16’s messy lock screen customization in iOS 17
The best voice-changing apps for Android and iOS
Spotify Wrapped 2022: what it is and how to view it
Save $225 on the unlocked Samsung Galaxy S22 Ultra with this deal
Samsung Galaxy Z Fold 4 is $350 off — no trade-in needed