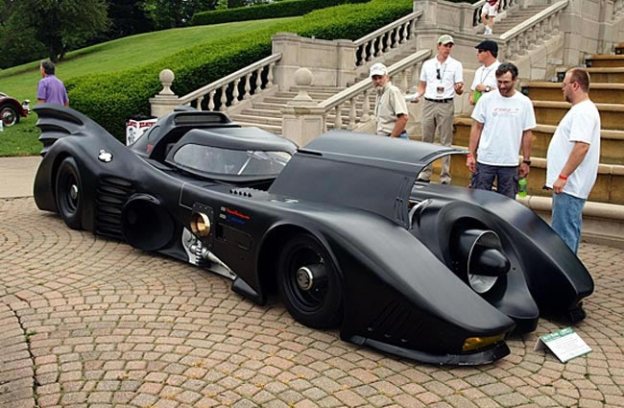 Casey Putsch, owner of Putsch Racing, has wanted a Batmobile since the first Batman movie premiered in 1989. Sticking with the iconic design from the two Tim Burton films, Putsch skipped using a standard internal combustion engine in favor of a Boeing turbine engine that was stripped from a decommissioned U.S. naval drone helicopter. The movie studios didn’t even attempt at using a turbine engine making this the first Batmobile replica to use a turboshaft engine, sans the ridiculous flamethrower shooting flames 5 feet out the back.

The 4-speed, semi-automatic Batmobile measures in at 20 feet in length and 7 feet, 5 inches wide. It has the ability to seat two people comfortably, weighs a bit less than 2,800 pounds and has a medium trunk for those weekly trips to impress the locals at the grocery store. It’s capable of 365 horsepower (similar to a Dodge Viper) and burns either diesel or kerosene jet fuel. It was built on a monocoque, steel tube chassis, but is absolutely street legal and registered for use in the United States.

On the interior of the turbine-powered Batmobile, Putsch upgraded Keaton’s CD player with an Apple iPad. The iPad allows Putsch to provide GPS support for the car as well as music and 3G-powered Internet. On the cockpit monitor, Putsch connected visible light spectrum and infra-red cameras for traveling in reverse. There are dashboard controls for the fire suppression system and the cockpit has a sliding canopy as well.

While the Batmobile was created with racing in mind, it requires far less maintenance than an internal combustion engine due to fewer moving parts. The turbine design makes it far more resistant to changing weather conditions like heavy rain or snowstorms. It’s also easy to operate and can be driven by anyone that can operate a standard automobile. While Nolan’s tank-like design in The Dark Knight is currently in vogue, no one can deny that they would love to drive around Putsch’s dream car for an afternoon.

Video-editing app LumaFusion to get a Galaxy Tab S8 launch
The best 12.9-inch iPad Pro Black Friday deal we found is still available
Apple iPad Mini just got a $100 discount for Black Friday
Latest iPad just got its first proper discount for Black Friday
The best screen protectors for Apple iPad (2021)
Don’t buy the wrong iPad during Cyber Monday — get this one instead
Samsung’s Galaxy Buds earbuds line is discounted for Cyber Monday
Audible Cyber Monday deal drops the price of Premium by 60%
This is your last chance to get 3 months of Kindle Unlimited for just $1
My favorite iPhone MagSafe in-car holders are Cyber Monday bargains
Surprisingly, the iPhone 14 Pro can’t win this epic camera shootout
5 things that would make the Google Pixel Fold next year’s best foldable
Apple Music Replay 2022: where to find and how to see your listening stats