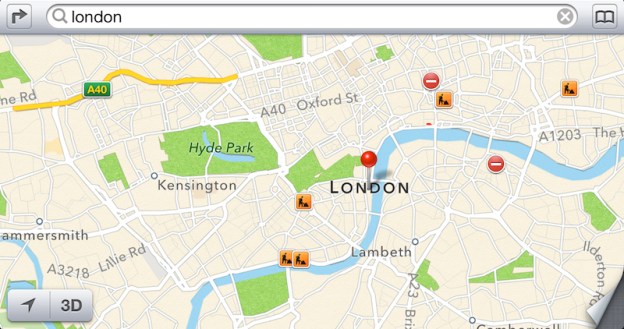 Apple’s woes regarding its Maps mobile app have been well documented, with the company taking a lot of flak from a lot of (lost) people, especially in the weeks following the app’s launch in September last year.

In the clearest sign yet that the Cupertino-based company is set on making the app something you’ll want to actually tap on and open, Apple has posted job ads on its site for “Maps ground truth managers” at seven locations around the world. If only it’d done that, like, before the app launched.

With so many reports – especially in the early days – of misplaced locations and lack of detail, a bit more ground-related honesty is exactly what Maps needs just now.

According to the job ad, the position would essentially involve managing a team of map specialists charged with the task of testing new releases of map code, gathering “ground truth data”, making use of local mapping experts and comparing Maps locally with competing products such as Google Maps.

Positions are listed for the US, Europe, the Asia Pacific region, Japan, the Americas, the Middle East and Africa. In other words, the whole darn world (it put up the same ad for Australia and New Zealand posts last week).

With all the resources Apple has at its disposal, no doubt Maps will one day be a force to be reckoned with – and may even give Google Maps a run for its money – but clearly it isn’t going to happen overnight.

However, Apple’s Maps team is already busy rolling out updates, with Japan getting a makeover and a bunch of new flyover imagery added for many locations around the world.

Once the ground truth managers are installed, things should really get moving for Maps.

Video-editing app LumaFusion to get a Galaxy Tab S8 launch
My new Apple Watch Series 8 already feels old — and that’s great
Best Prime Day iPhone Deals: What to expect on October 11
Best Prime Day Apple Watch Deals: Sale starts October 11
Best Prime Day iPad Deals: What to expect on October 11
The OG App, an ad-free Instagram client, is no longer on the App Store
The best phones for 2022: Which smartphone should you buy?
Best period-tracking apps for Android and iOS
Best Apple deals and sales for October 2022
Best Buy is having a giant Samsung Galaxy Tab sale today
Sensor breakthrough brings us closer to blood glucose monitoring on wearables
Does the iPhone 14 have the Dynamic Island?
Best Samsung Galaxy Tab deals for October 2022