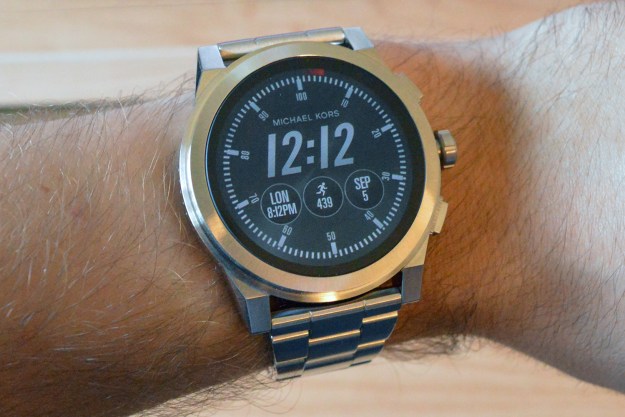 “The Michael Kors Access Grayson doesn’t have all the bells and whistles of other smartwatches at its price, but it puts fashion first.”

Fashion companies are fully on board with smartwatches, and for good reason. Smartwatches are wearables — they don’t live hidden in your pocket when not in use; they’re meant to be stylish and personal. Michael Kors’ latest men’s smartwatch fits the bill: Appearance is priority, and everything else is secondary. In our Michael Kors Access Grayson review, we found the Android Wear smartwatch to have a classic design, with good performance.

At a quick glance, Michael Kors’ Access Grayson looks like a normal watch. The body is slightly thick and a little heavy, but not uncharacteristically so for a Michael Kors watch.

Our review unit is the Grayson Silver-Tone model, which has a silver metal body with a clasp link band. There are three other variants you can get, all for the same price: Grayson Gold-Tone, Grayson Navy-Tone, and the Grayson Black-Tone.

On the right of the watch, you’ll find three buttons: The main crown acts as a home button and it’s how you access Google Assistant. You can rotate it to scroll through the Android Wear operating system. The top button by default gives you access to micro apps from Michael Kors, such as My Social, My Looks, and My Modes (more on these later); and the bottom button by default launches the Google Play Store. You can customize these two buttons to open whatever app or action you want.

On the underside of the watch sits the Michael Kors logo. Unfortunately, you won’t find a heart rate monitor here, but that doesn’t mean the watch can’t track basic fitness metrics. Tracking steps and calories burned via the Google Fit app was a cinch with this watch.

It feels and looks like a normal watch in every way.

The Access Grayson boasts an IP67 water- and dust- resistance rating as well, which means it can withstand being submerged underwater up to 1 meter for 30 minutes.

As far as straps go, there are a few options. Ours came with the metal band, but it’s easy to swap it for another like a leather strap if you so choose. There is no sizing tool provided, so you’ll have to take the watch to a Michael Kors store to make sure the metal band fits well on your wrist (or any watch repair shop, but Michael Kors will do it for free).

When it comes to comfort, the Grayson is as comfortable as any other watch with a metal band; it’s a little heavy, but not overly so. We like the look of the Grayson, though we might prefer the Navy-Tone model. It feels and looks like a normal watch in every way.

But functionality comes second to style. There are some features missing, like NFC for Pay, which lets you make bump-to-pay payments at supported retailers; and GPS. These features can be found on similarly-priced watches from smartphone manufacturers.

While performance isn’t necessarily as important on a watch as it is on a phone, it still plays a role in the overall experience.

Michael Kors’ Grayson features Qualcomm’s Snapdragon Wear 2100 processor, which is Qualcomm’s flagship wearable chip. That chip has been used on almost all Wear smartwatches, and it works well — the software is responsive and smooth, and apps opened quickly with no issues. There’s also 512MB of and 4GB of internal storage to store music so you can play it through Bluetooth connected earbuds.

The resolution of the circular 1.39-inch display on the Grayson is 454 x 454, and it’s sharp — much sharper than many other Wear smartwatches. Best of all, it’s an AMOLED display, so colors are vivid and the screen gets bright enough to be viewable outside, though not as much in direct sunlight.

The Grayson runs Wear 2.0, which is compatible with and iOS devices (functions on iOS are limited). Unlike on smartphones, there’s little variety in how the operating system (OS) works among different Wear watches; if you’ve used an Wear watch before, you’ll have a similar experience using the Grayson.

The Michael Kors watch faces pre-loaded on the Grayson aren’t the most attractive.

Swipe down from the main watch face to access quick settings, and swipe up to scroll through your notifications. You can also use the rotating crown to scroll up and down. Tap the crown to access your installed apps, and you can also find the Google Play Store here in case you want to install other apps.

Tap on a notification, and you’ll see it expand with options on what you want to do with it. Swipe left or right to get rid of it and it will disappear on your phone. Apps like WhatsApp or Facebook Messenger let you respond or interact to notifications. You can use a tiny keyboard, voice input, scribble letters down, or use Smart Replies that use artificial intelligence to offer up relevant, short phrases.

But not all Wear smartwatches have all the same features. Companies and brands can install its own “micro apps” to make the watch more personal to the brand. For Michael Kors, there are three micro apps: My Social, My Looks, and My Modes. My Looks allows you to set customized versions of the included watch faces. They’re sorted by background color — so you can create a yellow one, red one, and blue one, and then quickly change it to fit your outfit. My Modes is similar, but you can set different looks to kick in automatically at different times of the day. My Social lets you choose a photo from your Instagram to set as your watch face. They’re fun features that may appeal to the company’s demographic, but we didn’t use them as much.

The Michael Kors watch faces pre-loaded on the Grayson aren’t the most attractive — they look a little cluttered and over-the-top, so we ended up switching to the “Google Fit Analog” face that was more minimal. The good thing is there are hundreds of watch faces to choose from via the Google Play Store on the watch, or you can download them through your phone. You can also customize the look of each watch face by tapping and holding the watch face. You can add “Complications,” which are dials that offer information or shortcuts from apps (like widgets), or you can change the color scheme.

The Michael Kors Access Grayson packs a 370mAh battery, which is able to power the device for about a full day. It’s standard battery life on most smartwatches these days, and it means you’ll have to charge the Grayson every night to make sure it doesn’t die during the day.

The charger magnetically snaps on the back and wirelessly charges the watch.

The Michael Kors Access Grayson smartwatch comes at $350, which is pricey, but not as expensive as smartwatches from other fashion brands. It comes in four color options: Silver, gold, blue, and black, and they’re available now from the Michael Kors website.

The watch comes with a limited two-year warranty that only covers manufacturer defects. It does not cover wear and tear, or accidental damage incurred by the wearer.

The Michael Kors Access Grayson doesn’t have all the bells and whistles of other smartwatches at its price, but it puts fashion first. It’s a watch we would wear because it looks nice, and the ability to change watch faces to our attire or mood is appealing. Being able to respond and interact with notifications is a plus.

If for Pay, heart-rate monitoring, and GPS are important to you, then this smartwatch is not for you — check out the Huawei Watch 2.

Yes, and it depends on what you’re looking for. If you’re looking for a watch that can offer you notifications but appearance is a priority, the Grayson is a solid option. There are also numerous fashion brands releasing Wear smartwatches similar to the Grayson, such as the Movado Connect, and the Diesel On Full Guard. There are plenty of fashion-forward options to choose from.

If you want an Wear watch that offers better specs and more features, then perhaps the Huawei Watch 2 is the right choice for you.

For iOS users, the Apple Watch will always be far more functional than an Wear smartwatch, so we recommend taking a look at the Apple Watch Series 2. Do note, Apple is expected to unveil the Series 3 in September.

If you’re a fitness junkie, then perhaps a dedicated fitness tracker like Samsung Gear Fit 2 (the Gear Fit2 Pro is launching in October) or Garmin Forerunner 35 is the right device for you.

The Michael Kors Access Grayson should last two years at the least, but it could certainly extend beyond that if you take care of it. You may not get software updates after those two years, and the smartwatch’s battery may start to underperform.

Yes, if you’re set on Wear and like the look of the Michael Kors Access Grayson, then it’s an great choice. If you’re looking for something to track fitness, or want to pay with your watch, then there are better options out there.

Topics
Video-editing app LumaFusion to get a Galaxy Tab S8 launch
Does the OnePlus 11 have wireless charging? What you need to know
Best Fitbit deals: Save on Fitbit Versa 4 and Fitbit Charge 5
OnePlus 11 price: how much does the phone cost?
Does the OnePlus 11 have an alert slider? Read this before buying
Samsung Galaxy S23 Ultra vs. iPhone 14 Pro Max: Apple better watch out
The best Samsung Galaxy S23 Ultra pre-order deal we’ve found
These 5 features turned my iPad into a shockingly good computer
Samsung Galaxy S23 vs. Google Pixel 7: there’s a clear winner
The Galaxy S23 upgrade I’m most excited about is one you can’t see
Apple hints at cunning plan to make you spend even more on an iPhone
Google Pixel Watch is back down to its Black Friday price
AirPods Pro are back down to their cheapest-ever price