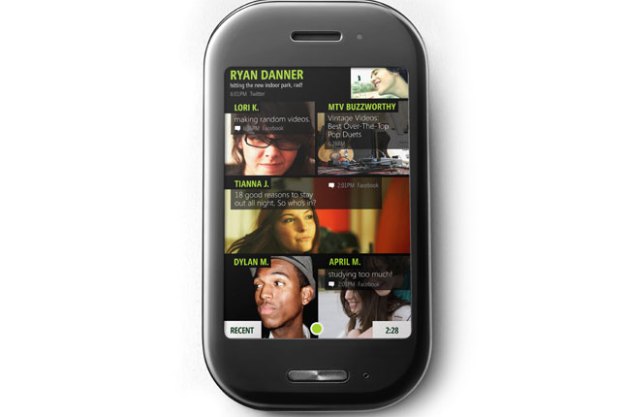 “Does an amped-up Sidekick have a place in 2010? Microsoft hopes to find out with the Kin One and Kin Two.”

As we all know, “different” does not necessarily equal “better.” Yes, the operating system Microsoft has concocted for its ballyhooed Kin One ($49.99 with rebate and two-year contract) and Kin Two ($99.99 with rebate and two-year contract) phones, made by Sharp for Verizon, is way beyond different. Whatever the OS is called – and Microsoft hasn’t called it anything (it has design elements we’ve seen in demos of Windows Phone 7), it’s a whole new cell OS gestalt, with little that is recognizable from Apple’s iPhone, Google’s Android OS, or even Windows Mobile, thank goodness. But does different mean it is better than any of these previous OSs?

Microsoft’s Susan-Boyle-like makeover of Windows Mobile adopts a collage philosophy, splaying a mass of single-color graphics, images and text on its three home screens: apps, The Loop, and Favorites. With no breathing space and little organizational sequence or priority, it’s a busy OS. To our quickly wearying eyes, all these tightly-packed and tightly-cropped on-screen elements felt claustrophobic, like kids jamming into a phone booth (remember those?), all mushed together, making quick identification of a single face, function or app difficult.

Like any new thing, you can get used to the Kin’s urban design zeitgeist, but its beauty-to-functionality ratio will definitely be in the eye of the holder. And its intended holder is the 15 to 25 crowd, each of whom may initially be attracted to “different” just to appear to be different.

By emphasizing social networking while deemphasizing other otherwise de rigueur cell functions and added applications, the Kin OS is this generation’s gussied up Sidekick.

The Kin’s primary home page is called The Loop, consisting of your status, and Facebook, MySpace, and Twitter updates from your designated social networks. Quote bubbles of new text messages cover these updates. Motorola’s Motoblur for Android offers a similar approach, but its updates – which also includes messaging and news feeds – are presented as overlays, pop-up bubbles over the standard Android screen. On the Kin, these social media updates are the screen, with nothing underneath.

Perhaps the Kin’s most innovative idea is Microsoft’s online mirroring Web site, called Kin Studio. Nearly everything you do on the phone – add a contact, view videos, send e-mail or texts – can be done from Kin.com, which uses the e-mail address and password you enter during the phone’s setup process. Even more convenient, everything you do on your phone is mirrored on Studio, which means all photos and low resolution videos are automatically uploaded to your Kin Web page.

To the right of The Loop is Favorites, a page of your most frequent contacts arranged into irregularly shaped and sized rectangles with tightly-cropped faces and all-cap contact names.

All screen space is monopolized by apps, faces, or updates, but you can use a photo as your lock screen wallpaper for some personalization. Fortunately, you also can switch from the sickly pea green “Voss” default color scheme to one of three other more aesthetically pleasing – but ultimately boring – themes. Just to help quickly identify the look-alike screens and app icons, it would be nice if we had a wider diversity of coloring options. More annoyingly, you have to restart the Kin to apply your new theme.

The Kin OS may have its overall pros and cons, but on the Kin Two and its 3.4-inch 480 x 320 pixel LCD, the OS clutter is at least decipherable. But the Kin OS overwhelms the Two.6-inch 320 x 240 pixel screen on the poor, little Kin One, requiring a lot more scrolling around to get to vital data. It’s too much information in too little space.

Physically, both Kins have one only front button: a wide silver back key. There is no home key, (although holding down back brings you to The Loop, and no send or end keys to quickly initiate voice calls. If you want to verbally communicate, you have to get to the apps page, of which “phone” is one, along with messages, e-mail, browser, camera, settings, alarm, and so on. Even contacts are relegated to this apps page, buried at the bottom. If you want phone status – battery remaining, signal strength, ringer status – you have to tap the small time rectangle on the bottom right of one of the three home screens.

The cute Kin One may be the first square cell since the Sony (pre-Ericsson) CM-RX100 – five years ago. While the Kin One looks like a makeup compact, it’s more like a baby with a really huge head, its small body trembling under the weight of its OS.

The Kin Two is a more pedantic horizontal slider phone with a three-line QWERTY.

While their shapes are different, the Kins share some physical characteristics. Both are slippery devils, for one thing. And the perimeter controls – volume, camera shutter, power – are too flush to the surface, thereby difficult to find by feel and to actually activate.

Equally unusual – in a good way – are the slide-out QWERTY keyboards on each phone. Each uses round keys well-spaced from their neighbors, which minimizes mistypes. The letter labels are all lower case and stylishly offset on each key; our only problem was quickly discerning the “q” from the “g” since the offset removes the serif from the latter letter.

Strangely, the smaller Kin One actually has the better keyboard. It sits in a slightly concave white background, which better offsets the black keys, the keys are arranged in a slight arc, and aren’t as spread out, which makes it more comfortable to thumb tap for those with shorter fingers.

The Kin One includes 4GB of onboard memory; the Kin Two offers 8GB – and that’s all you get. Neither Kin has an external expandable memory slot. Both Kins include a microUSB power/sync jack and a 3.5mm headphone jack.

The Kin One makes a decent music player for music, yes, but its screen is too small and too square for enjoyable video viewing. Even with a bigger screen, the Kin Two’s low-resolution (HVGA) LCD lacks the deep color and contrasts of the varying higher-resolution Motorola Droid screens.

The Kins are Zunes with a cell phone built in. You sideload music, videos and pictures content via the Zune online client, which wasn’t as easy or as quick as it should have been. But playing back music isn’t exactly intuitive. To get on-screen transport controls – to even get a song playing – you oddly have to tap a volume control key. The whole music-playing experience is unnecessarily confusing.

Oddly, neither Kin let’s you use music tracks as ringtones.

Both Kins sound a bit hollow, but no more than any halfway decent cell phone. There could be a bit more volume, however, and you’d think there would be some noise canceling considering this is a phone designed for social young adults. Both phones also lack volume and aural quality on the speakerphone for voice and music.

As noted, there is no dedicated send button to get directly to either phone’s dialer. The dialer on the Kin One, not surprisingly, offers small touch-screen keys, which make it easy to misdial. Touch keys on the Kin Two are just as tightly packed, but larger and easier to tap quickly.

Getting phone numbers into your contact list is an issue. The Kin imports your Facebook and MySpace contacts, but if your friends don’t add their phone numbers to their profiles, you won’t get them, and you’ll have to annoyingly add each manually.

Microsoft has created a new way of sending e-mails and media to multiple recipients. At the bottom of every Kin screen, is a Spot. You tap, hold, then drag contact icons, photos, Web pages, or anything sendable to the Spot. Tap the Spot to choose how you want to send it. As with the whole Kin experience, the Spot is decidedly different and adds a bit of existential cell fun, but I’m not sure it’s better than traditional methods of building a “send to” list and adding attachments.

Scrolling through lists on the capacitive touch-screen is not as smooth as it is on other touch-screen phones.

Both Kins deliver a clean, but slower-than-average EVDO browsing experience, with pages on mobile-oriented sites such as CNN, The New York Times and ESPN needing six or more seconds to load, although links within these sites snap into place a bit faster.

Even though both Kins have an external camera shutter key, the round silver button is too flush to the surface to be of any practical use. Plus, when you try to push it on the Kin Two to snap a picture, the QWERTY tray starts to slide open, causing the whole phone to quiver and the photo to blur.

The Kin Two sports an 8-megapixel imager, the Kin One a 5-megapixel. Both take excellent photos for a cell phone, although as usual, when blown up, you’ll detect digital extrapolation smudge and lack of detail and focus away from the center. Oddly, the Kin One has a wider angle lens than its larger sibling, which means you get more image in your Kin One snaps. You can turn the geo-tagging on and off, although we can’t imagine why you wouldn’t want it always on.

Even with a flash on each phone, indoor shots are still dark.

The Kin One captures VGA (640 x 480) video, while the Kin Two shoots in high-definition 720p (1280 x 720). The problem is getting this higher-def footage out of the camera. Kin.com doesn’t automatically upload high-quality video, just low-res footage. Since there’s no removable microSD card, and neither phone will let you add the video as an e-mail attachment, you’ll need to physically connect the phone to a computer and sync it to transfer footage.

Microsoft doesn’t supply rated talk times, which makes sense. In a phone designed primarily for non-verbal communications, rated talk time is pretty much irrelevant. The Kin One is rated for up to 8.75 days of standby, and the Kin Two for 9.7 days, which are both above average.

Microsoft’s Kin OS make the specialized Kins seem kind of alien, and it’s an acquired taste. It would be foolhardy for us to express an opinion on the look and feel, since some people will cozy right up to its unusual social network approach. You won’t take to the Kins if you’re more verbal and want a multi-function device – in other words, neither is a Droid alternative. Between the two, the Kin OS is too big and too cluttered for the cute Kin One. Neither phone is helped by their slipperiness or their impossible to feel-by-touch external controls. But if texting and keeping up with your virtual friends is all you want from a mobile device, either Kin can cleverly keep you connected.

Topics
Video-editing app LumaFusion to get a Galaxy Tab S8 launch
Best Phone Deals: Save on Google Pixel 6a, Galaxy S22 Ultra
Why the lawsuit against Apple’s AirTags may be bigger than you realize
Apple Music Sing brings karaoke singalongs to iPhones, Apple TV
Google Pixel 7a: release date, price, specs, and all other rumors
Best over-the-counter hearing aids for 2022
Save $70 on the Fitbit Versa 4 when you buy it today
My favorite phone of 2022 didn’t come out this year — it’s from 2021
Twitter’s downfall made me look for alternatives, but they just made it worse
How to buy over-the-counter hearing aids
Don’t miss this Apple Watch Ultra deal
Apple to use made-in-America chips for iPhones and Macs
How to use the free VPN on your Google Pixel 7 (and why you should)