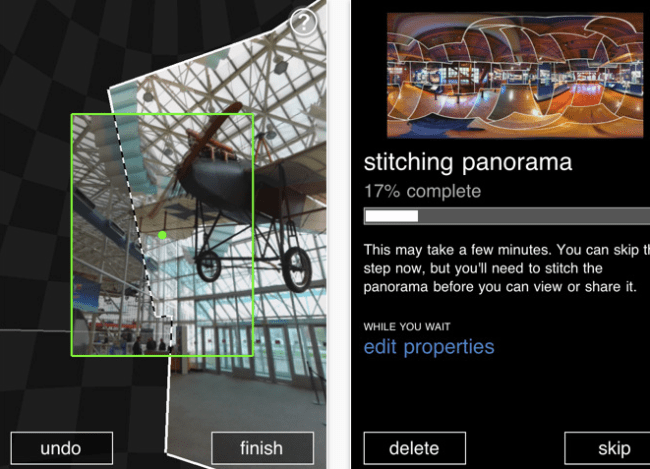 Microsoft has stepped into the mobile photo-sharing ring with the launch of Photosynth for Apple’s iOS. The free app lets users take multiple photos with an iPhone, iPod Touch or iPad 2 and then stitch the photos together to create a single panoramic image. The newly created image can then be uploaded and shared on Facebook, the Photosynth website or through Microsoft’s Bing  mapping service.

“After capturing a great panorama of a museum you love or a beautiful garden, choose to publish to Bing Maps and it could be seen by the world,” Microsoft’s Bing team said in a blog post. “From the map, ‘dive in’ and see your panorama next to that museum. Or, experience it seamlessly alongside the museum’s listing in Bing (if tagged with the location name).”

The app automatically snaps photos as the camera moves and displays in real-time a preview of the final image. A single tap on the screen and Photosynth automatically stitches the photos together to produce the final 3D panoramic image.

The latter of the two options is notable as it creates an opportunity for a crowd-sourced alternative to Google’s own photo-mapping project, Street View. Unlike Street View, which has so far been primarily limited to city streets, Photosynth’s 360-degree images can include indoor locations and outdoor areas that would be inaccessible to Google’s Street View vehicles (although, Google has done a few indoor locations including Street View imagery of several art museums).

Photosynth also allows business owners or patrons to photograph their spaces, link to the business and then incorporate the panoramic image into Bing Maps’ directory service for instant 360-degree publicity.

Photosynth has been available as a desktop panoramic tool since 2008. Microsoft has said that it plans to release the app next for its own Windows mobile operating system.