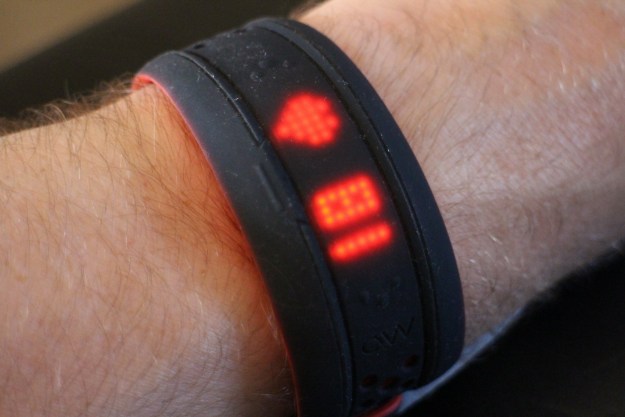 “Watch your heart rate skyrocket on the Mio Fuse, but mainly because you'll be messing around with its connection problems.”

Fitness bands have split into two distinct groups: those with design and functionality that appeals to athletes and hardcore sportspeople, and those that concentrate on a more stylish, appealing design for everyday wear. While bands from the likes of Jawbone, Misfit, and Xiaomi fall into the latter, it’s bands from Garmin, Polar, Mio, and Adidas that are best known for the former.

The Mio Fuse fitness band wants to sit somewhere between these two camps, alongside devices from Fitbit, by offering 24-hour tracking with heart rate monitoring, and skipping the frills that distract you from the task of getting fitter. We’ve been wearing it for a week to see if it really can bridge the divide.

Looks usually separates these two fitness band styles. Super slim and lightweight models like the Jawbone Up2 are a very different everyday-wear proposition than a hefty Garmin Vivoactive, for example. The Mio Fuse divides opinion. It’s a chunky, funky bracelet with a cool LED light readout, like the Polar Loop or the old Nike FuelBand. The strap has a wristwatch-style clasp that links with the holes that run almost all the way around, giving it considerable flexibility, but the device itself is large and looks out of place on small wrists.

The style means it looks great when paired with stylish workout gear, and I felt like a real pro wearing it to the gym, where it fits in perfectly. Wearing it with a suit looks and feels weird — not as out of place as neon green sneakers with your best Zegna suit, but something covertly bizarre, like wearing a compression vest under your dress shirt. It’s a sporty look for sporty types.

The silicone is wonderfully soft, appears to be very hardwearing (it looks brand new after more than a week of use) and is extremely comfortable to wear. Even though the display section is large, its curved shape ensures it happily fits under a shirt sleeve. We’ve been wearing it all day and all night — but despite all the positives, it’s not really ideal. It’s simply too big, and at 39 grams, quite heavy for an all-day fitness tracker. It feels like a wristband made for fitness freaks to track specific activities, with sleep and step counts tacked on, rather than the whole package being designed that way from the very beginning.

If the Mio Fuse’s design confuses, its functionality is perfectly clear. It counts your steps and calories burned, measures distance covered, tracks your sleep, and tells your heart rate. No notifications, smart alarms, or GPS here. Some consider these distractions, others essentials. With the Fuse, Mio definitely wants to keep you focused.

The result is effective. There are three buttons to control the LED screen: One on either side to scroll through the information, and a center button to activate the heart rate sensor and start a workout. Picked out by braille-like dots, the buttons are easy to miss, and for a while I was swiping across the faceplate thinking that was changing the display, before realizing my mistake. Holding down both buttons activates sleep mode, which increases accuracy over auto sleep detection but is easy to forget.

Tapping the buttons scrolls through the time, steps, distance, calories, and percentage towards your goal. You can opt out of showing all but the time, if you prefer. The LED readout is red, which is very bright (and matched the highlight color of our band). We had no problem viewing it in strong sunlight, and the characters are large enough to be glanced at while on the treadmill or out running.

Under the body is an optical heart rate sensor, which works alongside Mio’s own algorithms to give what it claims is a highly accurate readout. It consistently gave the same result as the Apple Watch and the Xiaomi Mi Band. Like those wearables, it’s also much more convenient having a heart rate sensor on your wrist than wrapped around your chest.

The Fuse syncs with the Mio Go app, where you activate specific workouts ranging from running, cycling, and walking to cross training, swimming, rowing, and more. To start tracking a workout, the band must be connected with the app, and the heart rate sensor running. Here’s where the problems start, because getting the Fuse linked to the app was a monumental mission. The app usually saw the Mio Fuse, but would timeout while trying to connect, therefore not syncing data or letting you start a workout. This became such an issue that the Fuse refused to connect at all. No amount of restarting the phone, force-closing the app, or swearing at it repeatedly made the damn thing connect.

While I persevered, relying on memories of connection issues in the past with other devices that helped me troubleshoot the Mio, regular people shouldn’t need to problem-solve in this way. The connection problems continued to plague the Fuse, and only after checking in with Mio did a Bluetooth reset (putting the phone in Airplane Mode and restarting) guarantee a connection. Since then it has been reasonably reliable, but such problems aren’t acceptable.

Once it is working, the Mio Go app isn’t the prettiest we’ve used, and doesn’t look like a fully fledged everyday fitness app. It’s firmly focused on your workouts. There’s also a second Mio app that works with the Fuse called PAI, which stands for Personal Activity Intelligence. Data needs to be synced between the two apps and the Fuse band, which is all a bit annoying; it would be far more user friendly if both became a single app. The PAI app’s design is also considerably more pleasing.

The PAI app reminds us of Nike’s Fuel metric. It’s based not solely on steps but on heart rate and general activity, and your target is to reach 100 PAI points each day. It doesn’t matter if you have an off-day, because it looks at your score weekly, meaning you’ve got a chance to catch up. The PAI metric is helpful, and leaves all the fitness number crunching to Mio, resulting in a target that’s designed to help you get fitter. You’ll have to trust Mio and PAI though, because outside of the recommended daily achievement of 100 points, neither the PAI or Mio Go app provides any other feedback or motivation.

Mio says the battery inside the Fuse will last up to a week, with an hour of heart rate monitoring each day, and this is consistent with our findings. Without using the heart rate monitor regularly, the Mio Fuse was ready for a recharge on the tenth day. That’s a strong performance, easily beating smartwatches like the Moto 360 Sport, and the otherwise excellent Samsung Gear Fit 2, but not matching exceptionally power-frugal wristbands like the Xiaomi Mi Band 2.

Mio provides a one-year warranty with the Fuse unless you deliberately damage it. If there is a problem with the band, Mio will repair it, replace it, or refund the original price. Happily the Mio Fuse is waterproof to 30 meters, so it should survive most encounters with the wet stuff, taking one of the main worries of wearable ownership away.

The Mio Fuse costs $119 through Mio’s website, which puts it in direct competition with the Fitbit Charge HR and the Adidas Fit Smart.

The Mio Fuse is a fitness tracker for seriously sporty types, with aspirations of being an all-day wearable for the casual fitness fan — but it’s too large and the software too complicated to be successful. The PAI app is interesting, however, and the scoring system has the potential to be really motivating. It really needs to be made the default Mio app. Most of all, the connectivity problems need to be addressed, otherwise it’s going to be put in a drawer and forgotten.

While the Fuse doesn’t work as an all-around fitness tracker for everyone, it is an excellent heart rate monitor, and it’s very comfortable to wear during sport. There’s a definite niche for the Fuse — keen athletes not worried about daily step counts, who are always dressed appropriately — and it’s considerably easier to use than the Adidas Fit Smart.

However, casual fitness fans will get more benefit from a smaller wearable like the Fitbit Alta or Xiaomi Mi Band 2, or by choosing the Samsung Gear Fit 2 or Moto 360 Sport smartwatch, mainly because they’re all less intrusive to wear on a daily basis, and the software is easier to use.

Topics
Video-editing app LumaFusion to get a Galaxy Tab S8 launch
The best Samsung Galaxy A53 5G cases and covers
The most common Wi-Fi problems and how to fix them
Google to pay $392 million to 40 states in location-tracking settlement
First OnePlus tablet tipped for a 2023 launch to take on the iPad
Google Black Friday deals: Save on Pixel 7, Pixel Buds and Pixel Watch
Apple Watch Black Friday deals: Save on Series 8 and Ultra
Best Black Friday iPad Deals: iPad Air, iPad Mini, iPad Pro
Now’s a great time to buy the Samsung Galaxy S22 Ultra
The best Cyber Monday Apple Watch deals for 2022
The best Cyber Monday AirPods deals for 2022
Fitbit Cyber Monday Deals: Save on Sense 2, Charge 5, and Versa 2
5 Apple gadgets you really should avoid this holiday season