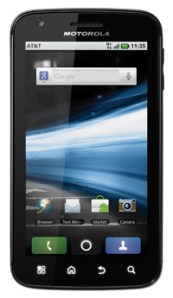 One of the best smartphones on the market — the Motorola Atrix 4G — is now available at AT&T, as well as Radioshack, Amazon and Walmart, reports Engadget. But the price of the device changes depending on where you buy it.

Here’s the deal: AT&T is offering the Atrix for $199.99 with the signing of a new two-year contract. Amazon and Radioshack, on the other hand, will sell you the same exact phone for only $149.99 (also with a new contract). But if you head over to your local Walmart, you can get Atrix for a mere $129.99, with a contract, as long as you get there before Thursday, February 24.

As some of you might remember, this isn’t the first pricing debacle to go along with the Atrix 4G. One of our favorite features of the Atrix, Motorola’s first Android-based phone, is its Laptop Dock add-on accessory, which allows you to quickly turn your phone into a laptop. Rather than tethering the phone to a regular laptop, the Laptop Dock is just a screen, battery and keyboard, and is entirely powered by the phone. Good idea.

Unfortunately, the price of the Atrix phone plus the Laptop Dock ($600 for both, after a $100 mail-in rebate) plus AT&T’s “DataPro 4GB for Smartphone with Tethering plan” ($1,080-per-year) made the whole package economically unacceptable, considering you could get Atrix 4G, an ASUS Eee PC with Windows 7, and a 2GB plan for $465 less than the Atrix/Laptop Dock bundle.

TL;DR: Buy the Motorola Atrix 4G at Walmart before Thursday, and it will cost you $70 less than it would at an AT&T store.