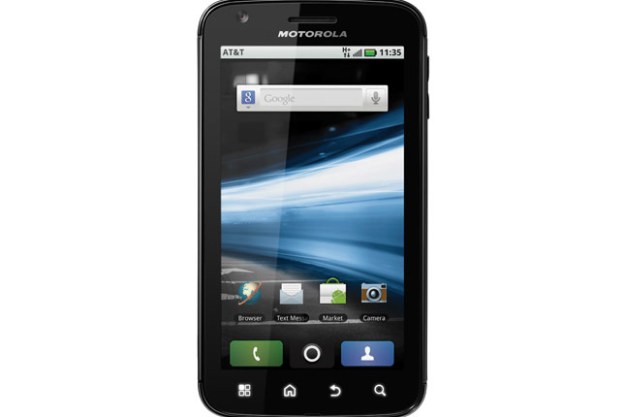 “As solely a smartphone the Motorola Atrix 4G won't blow you away, but its accessories make it stand out from the crowd”

Convergence is everywhere these days – be it game consoles that stream Netflix movies, GPS devices that double as speakerphones and televisions with Web browsers – but the Atrix 4G smartphone takes this concept to the next level.

Specifically, with the aid of a couple of optional accessories, this AT&T exclusive from Motorola ($199.99 on 2-year term) can transform into a laptop or media hub for your big-screen TV.

This Android 2.2 Atrix isn’t a flawless product, mind you, but based on our hands-on review time with it over the past few days it’s a clever digital Swiss Army Knife.

Before we go over its versatility – where the real story is here — a few words on the Atrix 4G itself.

Winner of numerous awards from the recent Consumer Electronics Show (CES), the Motorola Atrix 4G is billed as one of – if not — the most powerful smartphones available. This is because it includes a dual-core processor, with each core running at 1GHz — thus delivering up to 2GHz of processing power. The phone also boasts 1GB of RAM, which is about twice the system memory compared to other smartphones.

You can sense this speed when opening and running apps, surfing the Web, and for when you’re docking the smartphone into one of the accessories to use on bigger screens. We launched the same website at the same time on both the Motorola Atrix 4G and the new Nexus S, and the Atrix was much faster at loading the site (and yes, we know one is on AT&T and the other on T-Mobile). Interestingly, both Android smartphones launched a game (Samurai II) at the exact same time and were equally as smooth in the performance department.

The Atrix 4G features a 4-inch touchscreen – and “the world’s first qHD display,” says Motorola – delivering a resolution of 960 x 540 pixels with 24-bit color and a 16:9 aspect ratio. Certainly the color and contrast is impressive, but the shiny screen has a lot of glare when used outside (worse than the Nexus S). The 11mm-thin Atrix 4G is comfortable to hold in your hand, with its rounded edges and curved back, and is no heavier than other smartphones.

Other features include dual cameras (including the ability to record 720p HD), 16GB of internal memory (with support for up to 32GB microSD cards) and integrated Wi-Fi N (2.4GHz and 5.0GHz).

Sample photo taken with the Atrix

One interesting and distinguishing characteristic is the integrated fingerprint reader on the back of the smartphone. Along with (or instead of) creating a PIN to unlock your phone, you can swipe your left or right forefinger on the black power button. Set up takes about two minutes and it worked flawlessly after that. This optional biometrics security feature should be a welcome addition for mobile executives carrying around sensitive corporate data.

Battery life was decent but not extraordinary, with the battery life indicator showing just under one-third of power left at the end of each day — with moderate use.

While not tested in rural areas, we tested the Motorola Atrix 4G in Austin, Texas (at the SXSW festival), in Washington D.C. and in Toronto, Canada, via the Bell Mobility network. We’ve had more reception troubles with an AT&T iPhone 4 – but in New York and San Francisco — so it might not be a fair and accurate comparison.

The audio quality is very good, with no bad reception areas or dropped calls, both when holding the phone up to the ear and via a Bluetooth headset. The people we chatted with could hear me just fine, and they came through loud and clear, too.

While we’re certain we weren’t experiencing 4G speeds while traveling last week, downloads from the Android Market were fast and reliable.

Along with the familiar Android interface, Google apps and Moto Blur software (that pushes messages, social network updates and such to your smartphone), the Atrix 4G includes an app for AT&T U-verse to schedule recordings and download TV shows for U-verse customers.

OK, here’s where things gets interesting.

The Atrix 4G can be snapped into a number of optional accessories that expand the functionality of the device.

For example, the Laptop Dock ($299.99) or LapDock, looks like a super thin laptop. Except there’s no brains under the hood of this svelte 2.4-pound clamshell device. Instead, snap the Atrix 4G into the back of the faux laptop, by matching up the two connectors on the left side of the smartphone and now you can access all the content on the smartphone (or online) on a 11.6-inch screen, full-size keyboard and trackpad (or you can add an external mouse to one of the two USB ports).

Yes, so now you can type more comfortably in a word processing document, play Angry Birds with a mouse or surf the web with a “webtop” application like Mozilla’s Firefox 3.6 browser (with Adobe Flash support). Interesting, though, a Google phone has Firefox instead of Chrome. A number of apps lie across the bottom of the screen, including Emails, Contacts, Facebook and an Entertainment Center that lets you access multimedia stored on the device, such as videos, music and photos. You can also smoothly multitask in this layout, thanks in part to system memory and beefy processor.

A built-in rechargeable three-cell battery also juices up the Atrix 4G when docked in the LapDock. The speakerphone kicks in when you receive a call; if you need to chat privately, which requires you to un-dock it from the LapDock, whatever you were doing on the LapDock screen will resume when you re-dock it again.

Despite a freeze-up while attempting to play a preloaded car racing game, the dock worked like a charm. Business travelers, for example, can now bring this sturdy yet lightweight shell of a laptop and access all of the content on the smartphone. Compare this to lugging a six-pound laptop and swapping data between your smartphone and the computer.

Except paying $300 for a fake laptop (plus a $20-a-month tethering plan) seems like a lot for what it is. After all, you can get a decent netbook for $300 that doesn’t require a phone connected to it.

Another product tested for the purposes of this review is the $99 Motorola HD Multimedia Dock, a small black dock with a micro HMDI port — to connect the Atrix 4G to a big-screen television, monitor or projector – as well as three USB ports for devices such as a (wired) keyboard, mouse, speakers and so forth.

A matching wireless remote is also included to navigate through your content with a scroll wheel, and six main buttons (such as volume up, down, a home button, and so on). The dock also ships with an AC plug to charge up your smartphone while it’s in use. It would’ve been nice if Motorola included a full-size HDMI adaptor (or the cable itself) so it could be used out of the box. Alas, a quick trip to our local big box store was required, so we could watch MP4 videos via an app called RockPlayer, as well as YouTube videos on our big-screen Sony HDTV.

While it’s powerful and secure, the Motorola Atrix 4G won’t blow you away as a smartphone. It’s certainly as good as any other Android devices on the market, if not a tad better in most departments – but it’s what you can do with it that makes it stand out from the crowd. That is, the accessories make the phone a lot more compelling.

It’s pricey, but the LapDock worked like a charm, and should be an appealing alternative to travelers who want a lightweight laptop while on the road. The HD Multimedia Dock also worked well for consuming media, but a few other smartphones today have an HDMI output option for a television.

At the very least, AT&T customers itching to pick up a new Android phone should try out the Motorola Atrix 4G and accessories.