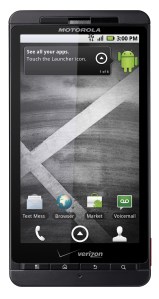 Motorola can’t sit still. After cleaning up in smartphone sales this holiday season with the original Droid, the company has since seen Apple put a fresh face on the aging iPhone with a new heir to its throne, and fellow Android-pusher HTC release the EVO 4G, the first 4G phone in the U.S. Seeking to put some wind back in the sails of its own flagship, Motorola on Wednesday revealed the Droid X, the next contender to don the Droid name.

Following closely along the lines of HTC’s EVO 4G, the Droid X will adopt a 4.3-inch widescreen, 8-megapixel camera that shoots 720p HD video, and even act as a mobile hotspot. Although we know the Droid X will run at 1.0GHz, like the EVO 4G, rumor has it Motorola has adopted Texas Instruments’ OMAP processors rather than Qualcomm’s Snapdragon. The company notably left the exact details off its Droid X spec sheet. [Update: Verizon’s spec page for the Droid X confirms it will use a TI OMAP processor.]

Notably, the Droid X will also include an HDMI output, potentially giving it the same pocket-sized multimedia capabilities as Microsoft’s Zune HD.

Even more promising for the prospect of high-def video playback, the Droid X will include both 8GB of onboard storage and a microSD expansion slot with a 16GB card preinstalled, for 24GB available right out of the box. Upgrading to a 32GB card, the largest the slot will accept, will push the phone to class-leading 40GB of total storage.

The Droid X will ship with Android 2.1 initially, but Motorola has already promised an update to Android 2.2 by late summer. Flash 10.1 will also arrive around that time.

Like Motorola’s previous Droid offerings, the X will appear exclusively on Verizon. The carrier will offer it for $200 after a $100 rebate, starting July 15.

For more pictures check out our photo gallery on the Droid X.