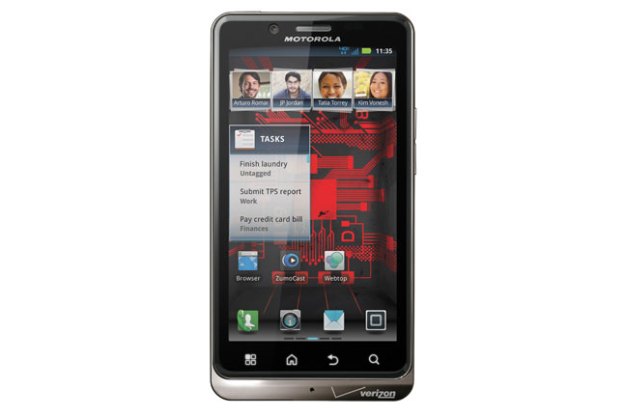 “If you're looking for a 4G LTE phone that isn't already outdated, the Droid Bionic is the phone for you.”

The Motorola Droid Bionic went on a long journey this year. Debuting at CES in January, it was supposed to be the first dual-core LTE phone to hit Verizon. But when Verizon devices finally hit shelves during the summer months, the Bionic was nowhere to be found. Now it’s back with a completely new look and still sporting solid specs, but we still wish it didn’t have some of the weaknesses of recent Motorola devices.

We can’t complain about the design of the Droid Bionic. It looks slick. Following the design style of the Droid 3 and Droid X2, the Bionic has a large 4.3-inch screen surrounded by a shiny metal border. On the back of the phone is a rubberized plastic shell, which covers the battery, SD card slot, and LTE SIM Card. An audio jack, micro HDMI, and micro-USB port are all available.

The Droid Bionic is perfectly usable, but we’re going to get nitpicky. After using the Moto Photon 4G, we have to say that the “feel” of the Droid Bionic is not as good. Motorola has chosen to give this phone a boxier design with sharper corners, which makes holding it a bit more awkward than on the Photon, a phone that seemed to have ergonomics in mind. The thin power button on the top left is also a bit harder to reach than the larger, right-aligned power button on the Photon 4G. The volume rocker is equally lame compared to Motorola’s recent Sprint device: It’s actually a bit lower than you’d hope, forcing users to move their thumb down a bit more than comfort allows.

Like most Android devices, the face buttons on the Bionic are haptic touch and ordered from left to right: menu, home, back, search. We also like the placement of the rear speaker, which doesn’t tend to get blocked as severely as some of the recent Samsung devices.

Finally, though it’s a dual-core LTE device, the Droid Bionic is thin. The Droid Charge, LG Revolution, and HTC ThunderBolt were all a bit hefty for their size, but the Bionic completely reverses this trend, offering a 4G speeds hammered into a thinner profile. The Bionic is 11mm thick at its thinnest point, 127.5mm long, and 66.9mm wide.

The Droid Bionic is the first dual-core 4G LTE phone. Like most of the new dual-core devices popping up, it runs on a 1GHz dual-core Tegra 2 processor with 1GB of RAM and a 4.3-inch qHD screen (540 x 960 pixels). Like some of the other LTE phones, this one also comes with 16GB of internal storage and a 16GB memory card as well, pumping up the total storage for media and apps to 32GB.

Unfortunately, like all high-end Motorola phones this year, the Droid Bionic has a screen that isn’t up to snuff. Though it looks to be improved from the Photon 4G, Droid 3, and Droid X2, the Bionic screen still has noticeable issues with subpixels, color banding, and dull colors. Motorola’s PenTile LCD screen has visible black and white subpixels that can be seen with the naked eye. These make the edges of icons and other objects appear a bit pixelated, which is a shame since qHD resolution should look quite sharp. We recommend you try out the device before buying it. If the screen doesn’t bother you, then move ahead.

While we’re still hoping that Motorola will end its use of NinjaBlur once Google buys it, for now we’re stuck with the UI. It’s faster now thanks to Android 2.3 (Gingerbread), but still rather ugly and lacking features compared to the competing HTC Sense. It’s just silly that Motorola has bothered to modify Android at all, though we do like Motorola’s set of resizeable widgets. They’re some of the more helpful and useful widgets on Android at the moment, though the phone lacks a good clock widget.

Motorola sent us a whole bunch of accessories for the Bionic including the famed Laptop Dock, which made its expensive debut earlier this year with the Atrix. We still really like the idea of the laptop interface in theory, but as a laptop, it is laggy, slow, and doesn’t have enough apps to justify the purchase. If all you want is a slow Firefox browser and a keyboard, then this does the trick, but with Android Ice Cream Sandwich on the way, Motorola’s custom desktop interface will soon go extinct. The new version of Android coming out later this year will supposedly allow a phone version of the OS to run on a tablet device, and automatically scale itself up to the new resolution. Now that Google is buying Motorola, we assume that a more usable laptop dock may be on the way. Motorola’s laptop dock sells in the neighborhood of $300 to $500.

Like all Android devices, the Droid Bionic has access to the more than 300,000 apps on the Android Market. We like some of the custom apps Motorola has included like the file manager, task manager, MotoPrint, social networking, and task list, but we’re not big fans of the apps that Verizon preloads on the phone like Blockbuster, City ID, Amazon Kindle, GoToMeeting, Let’s Golf 2, NFL Mobile, VZ Navigator, 4 V Cast apps, Slacker, Quickoffice, and ZumoCast. Some of these apps may be helpful to you, but all together, they are simply taking up space in the app list. We wish they were removable.

Motorola has stuck with the standard Google Android browser for Web browsing. It has its share of downsides, but gets the job done better than most of the custom smartphone browsers on the Market. We hope that Google will soon release a version of its Chrome browser on Android, but until then, this Webkit browser will do the job. One caveat: It tends to render mobile pages quite frequently, which can be annoying on a phone this size. At 4.3 inches, the screen is almost too big to need to run mobile sites.

In upper Manhattan, New York, we’ve been getting amazing download speeds from Verizon’s 4G LTE network. In our recent tests, the Droid Bionic has been achieving 18Mbps to 22Mbps, which is far greater than the 1Mbps to 4Mbps we’ve seen on other services like Sprint and AT&T. Uploads aren’t as great, peaking at 2Mbps to 3Mbps, but we’ll settle for that.

The Droid Bionic appears to have the same camera in it as the Photon 4G and other recent Motorola devices, which is a bit disappointing for those who like a good camera. The 8-megapixel camera has autofocus and dual-LED flash. It gets the job done, but it doesn’t compare to the cameras on Samsung and HTC devices. The autofocus is slow, and moving it around is more cumbersome than it could be. In addition, most pictures turn out somewhat dull and drained of color compared to cameras on high-end phones by the competition. Also disappointing is the front-facing camera, which is again a low-resolution VGA camera. This week, Google unveiled Hangouts for phones on Google+, but those using video chat on a Motorola phone won’t have as good a picture because the camera’s resolution is actually lower than the screen.

The upside here is that, like most dual-core phones, the Bionic can record video at 1080p. If you’re big on high resolution video, this is a win. Just keep in mind that your video will be as washed out as your pictures.

Our test calls on the Droid Bionic yielded no major problems with reception or call clarity, but call quality was not as clear as it was on the Photon 4G on Sprint’s network. To be fair, it’s hard to pin down whether it’s the phone hardware or just Verizon’s service.

In our nonscientific testing, the Droid Bionic’s battery life has been somewhat poor, due to its 4G LTE connection. Motorola has tried to deal with the issue: the Bionic comes with a 1,735mAh battery, about 200mAh more than most devices. Unfortunately, it’s not enough. We only used the phone lightly and ran dangerously low on battery by the end of the day. Motorola’s official tests rate the phone at 10 hours and 40 minutes of talk time and 8 or so days of standby time. We recommend you pick up an extra battery with this guy.

Update: We used the Droid Bionic with the new upgraded 2880mAh Extended Battery and backcover. It adds a bit of heft to the device, but if battery life is a big deal, this extended our battery experience quite a bit. It costs about $40.

If you’re looking for a 4G LTE phone that isn’t already outdated, the Droid Bionic is the phone for you. Like all recent Motorolas, this phone has some issues with screen quality and its camera, but it more than makes up for it with a dual-core processor and quick 4G LTE speeds.

Xiaomi steals Leica from Huawei for its next flagship phone