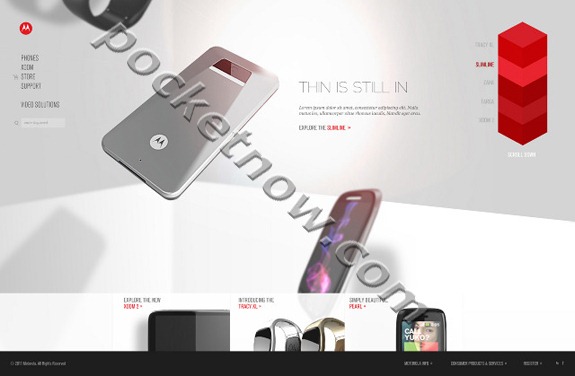 A site redesign by Motorola yesterday accidentally gave us a sneak peak at the manufacturer’s product lineup. Either someone launched the page a bit too early, or Motorola wants to drive a little interest around these “leaked” devices. Regardless, we’re happy to take a look.

PocketNow first got a hold of the content, but took down the images per Motorola Mobility’s request (which does make the whole thing seem more credible). Luckily, all the photos made the rounds this morning before they disappeared. Here’s a quick rundown of what you can expect to see from Moto in the future.

Unfortunately the only revelation about this product is that it exists. There’s little more than a glimpse at a corner of the tablet, but it will likely have a subtle redesign to slim down the device.

The Slimline’s tag line is “Thin is still in,” a possible homage to the now-defunct Razr. The image shows a sleek, buttonless smartphone – although we’d guess this is the back of the device and the lens above is the camera as it doesn’t look like it’s a flip phone. The Zaha looks to be your more traditional smartphone. The image shows off what is likely a touchscreen and the tagline suggests some fancy new technology will be part of the phone.

There’s also mention of two devices (we’d assume phones) called Targa (top arrow) and Pearl, but the available images were miniscule and revealed little to no details. Previous rumors have said the Targa will be a Verizon LTE smartphone.

This easily wins the title of most unexpected product from Motorola. It’s a futuristic timepiece that plays off the Dick Tracy watchphone. All of the other leaked products were Android devices, so the Tracy XL likely has more capabilities than the average wristwatch. Your guess is as good as ours, but our of pure speculation we think the Tracy XL will have most of the features of the average smartphone sans the processing power and storage.

Video-editing app LumaFusion to get a Galaxy Tab S8 launch
What to expect from Google’s October 6 event: Pixel 7, Pixel Watch, and more
The best tablets for kids in 2022: Fire HD, iPads, and more
Apple AirPods Pro 2 vs. AirPods Pro: What’s new?
The first Galaxy S23 Ultra leak is great news for S22 Ultra fans
The best iPhone 11 wallet cases and covers
WhatsApp is copying two of Zoom’s best video-calling features
Best Verizon Fios new customer deals for September 2022
How to turn on the haptic keyboard in iOS 16
Nreal’s Air AR glasses head to the U.S., ready to rock with iPhones
The best ad-blocking apps for Android in 2022
Google wants you to know Android apps aren’t just for phones anymore
I have a confession — I may have been wrong about the Apple Watch Ultra