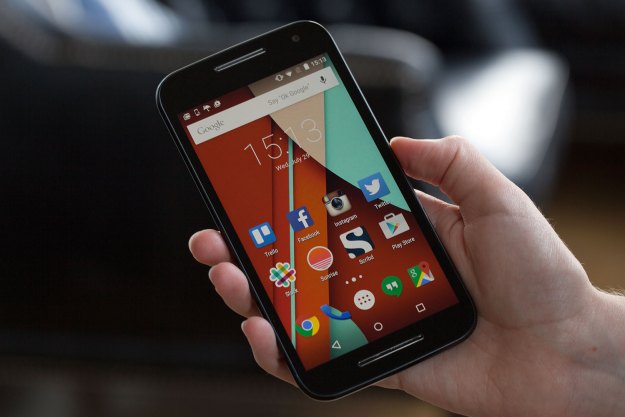 Motorola set the gold standard for budget phones with the first Moto G — the new one raises the bar yet again. Other sub-$200 phones will turn green with envy over the 2015 Moto G’s fun customizable color options, waterproof build, and sharp, 13-megapixel camera. It’s a killer budget phone, and Motorola’s selling it for just $180 — $10 more than HTC’s sleek Desire 626S, which has slightly less-powerful specs.

The kick-ass camera and Moto Maker customization options are the cherries on top an already sweet deal, but is it worth buying if you’ve got an older Moto G or some other budget phone? We’ve used the new Moto G for a few weeks to let you know how it handles daily use.

Make it your own with Moto Maker

Most budget phones are as ugly as homemade sin – with the noted exception of HTC’s Desire 626, which was recently released. Motorola’s new Moto G is prettier than most, and Motorola offers some truly fabulous colorful back covers that will overjoy anyone bored to death of black. We saw a charming goldenrod yellow, hot pink, bright green, and a number of other excellent color options at the Motorola launch event. You can even customize the metal accent on the back of the phone with a bright pop of color.

It’s a brilliant idea to expand Moto Maker’s customization engine to the Moto G. Even though it’s Motorola’s cheapest smartphone, it’s also one of the company’s most popular devices ever – especially in emerging markets. Anyone who wants to buy their kid a cool looking phone or just wants to save money on their own device will be glad to have more than the basic black option.

The build is mostly solid, and despite lacking a metal frame, the Moto G feels sturdy. The slight curve to the back makes it comfortable to hold, though it is chunkier in the middle than HTC’s Desire 626. The only issue we had with the back cover is that it creaks if you press down next to the metal insert in the center on the back. The Moto G is a budget phone, so it can’t be perfect, but after holding the HTC Desire 626, which has a seamless plastic build that feels wildly premium for such a cheap phone, the little creak was disappointing.

This could simply be an issue with our early review unit, though. Customer reviews of the new Moto G’s build quality are overwhelmingly positive. Also, after we removed the back cover and put it back on, it seemed less creaky.

The Moto G’s durable, waterproof body sports a 5-inch touchscreen with a 720p resolution. Although it’s not 1080p, the Moto G’s screen is luminous and sharp. (If you want to pick a fight about pixels, you shouldn’t even look at phones that cost less than $400.) The 720p looks screen great on the Moto G, and only pixel purists will notice the absence of those extra dots. I had no problem watching Netflix and YouTube videos on the 720p screen while on the go. Of course, the lack of pixels is noticeable from time to time, especially when you’re zooming in on pictures. Regardless, for what you’re paying, the Moto G’s 720p screen is more than fine.

Unlike some previous Moto G phones, this one is fully loaded with 4G LTE high-speed capabilities. It was excellent at streaming videos at 4G speeds, and I never noticed lag while checking email, sending messages on Slack, browsing the Web, or any of the normal tasks people use their phones for. Although the Qualcomm Snapdragon 410 processor — a quad-core, 64-bit chip running at 1.4GHz — isn’t the fastest chip in the world, it gets the job done without a hitch. It’s also a lot faster than the Snapdragon 210 in the HTC Desire 626, which is still better than what you’d find in almost any budget phone.

Motorola will offer two versions of the Moto G, one a 2GB RAM and16GB storage combo, and another 1GB RAM and 8GB storage version. Regardless of which you choose, the MicroSD card slot will allow you to expand the memory significantly. The extra space will definitely come in handy for most users, as even 16GB runs out fast if you like to take pictures and download apps.

Just like the Moto X and all of Motorola’s phones, the Moto G runs pure Android 5.1.1 Lollipop as Google intended. Fans of stock Android will be pleased with the clean look. I personally love stock , and manufacturers that leave well enough alone. Motorola’s choice to stick with Google’s pure experience is part of what makes its phones so pleasant to use. They also get updated to the newest version of the OS almost as quickly as Google’s Nexus phones.

Shockingly, the Moto G is really all the phone you need. As much as we like to brag about having the latest and greatest phones with the fastest processors and the sharpest screens, most people really only need a simple, powerful phone like the new Moto G. It makes you wonder if the whole flagship experience isn’t just good marketing. Of course, if you’re a gamer, you may need more power; and if you stream every show and movie on your phone, 720p won’t make you happy.

A flagship’s camera on a budget phone

The camera alone is likely motivation enough for many wallet-conscious shoppers to consider the Moto G. After all, the exact same 13-megapixel camera on the back of the Moto G can be found on the Nexus 6, which in case you’ve forgotten is a $600+ flagship made by both Motorola and Google. Although Motorola fields complaints with its cameras, the one in the Nexus 6 was decent, certainly more than good enough for a budget phone.

The Moto G’s camera suffers from the same problems that plagued the Nexus 6 after sunset.

The camera also sports an improved lens, an IR filter, an f/2.0 aperture, and a dual-tone color-balancing flash. We snapped a few shots with it on a sunny day in New York, and came away with lovely pictures of the Empire State Building and the city streets. Indoor photographs are iffier, and low-light shots are just grainy and terrible. The Moto G’s camera suffers from the same problems that plagued the Nexus 6 after sunset. Those who demand a high-end photography experience on their smartphones won’t be satisfied with the limitations of this camera sensor.

It’s not the best, but you won’t be disappointed, having spent less than $200 for a decent camera and otherwise impressive budget phone.

Meanwhile, a 5-megapixel selfie camera sits on the front of the device — higher resolution than the one on last year’s iPhone, which again, costs more than $500. That’s the same resolution as the one on the new iPhone 6S, which will start at $650. Motorola invested in cameras on the Moto G, which makes perfect sense. People buy smartphones in part to take nice pictures. However, most budget phones offer terrible cameras with super low resolutions. Not so with the new Moto G.

As long as you’re taking pictures during a sunny or slightly cloudy day, you should be okay. The Moto G has undoubtedly one of the best cameras on a sub-$200 phone.

All-day battery life even with heavy use

Other than the camera and performance, the most important aspect of a smartphone is battery life: Can it get you though the day? Luckily, the answer in Motorola’s case is yes – that and more.

A 2,470mAh battery powers the new Moto G, and it lasts almost a day and a half, thanks in large part to that 720p screen. No matter how much you use this phone, it keeps on ticking the entire workday and on into the night. If you don’t use your phone too much, the Moto G could certainly last you two days. I typically charged it at the end of the day just so that it was ready to go the next day, though.

If you’re looking for a good smartphone, you don’t need the latest and greatest, and you’ve got $200 burning a hole in your pocket – look no further than the Moto G. The customization options, high-res camera, and long-lasting battery take it to another level that most budget phones don’t come close to approaching.

Motorola built a solid phone and didn’t compromise the spec sheet in any major way. The Moto G may not have cutting-edge specs, but it’s all the phone your average user needs. In fact, if you told a power user that this is the new flagship phone from Motorola, they’d need a discerning eye to figure out you’re lying. The Moto G is impressive, and for less than $200, it’s an incredible deal.

Topics
Video-editing app LumaFusion to get a Galaxy Tab S8 launch
The best protective iPhone cases in 2023: the 25 best ones
The best tablets for kids in 2023: top picks for your kids
The best game-streaming services for 2023
Best microSD cards in 2023: top picks for your computer, camera, or drone
Yes, we really are completely spoiling the OnePlus 11 and Buds Pro 2 launch
The best rugged smartphones for 2023
The best iPhone games in 2023: 31 games you need to play right now
This Apple leaker just revealed tons of changes for iOS 17 and iPhone 15
Beats Studio 3 headphones are $120 off today at Amazon
How to cheat in Words With Friends
Trading in your iPhone with Apple? You’ll get less than yesterday
The best QR code scanning apps for iPhone and Android in 2023