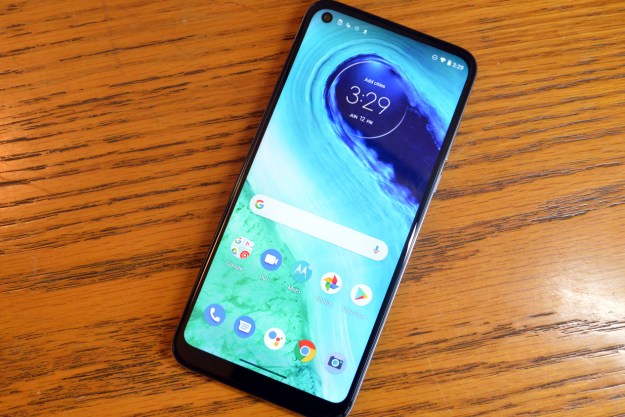 The Moto G seires has endured ups and downs. The device was long considered one of the best budget options, but in recent years, the competition from the likes of Samsung has seriously heated up. However, as is often the case, Motorola has launched a number of new Moto G models in response, including the ultra-affordable Moto G Fast.

The Moto G Fast hopes to bring  premium features and a thoroughly modern look to a $200 price point. While there are other phones in this price range, there aren’t many — particularly from big-name brands like Motorola, Samsung, and LG.

Two or three years ago, you would be hard-pressed to find a phone with a modern, edge-to-edge display design in the sub-$250 price range. Now, they’re becoming increasingly common — and we’re glad to see it.

On the front of the Moto G Fast, you’ll get a nice big 6.4-inch edge-to-edge display, which a hole-punch cutout in the top left-hand corner of the device. The cutout is a little larger than some other devices, like the Galaxy A51 or OnePlus 8 series, but it’s still pretty out of the way, though you’ll get used to it quickly.

Around the display, the bezel is relatively slim, except for at the bottom, where there’s somewhat of a chin. It’s not a big deal, and design choices like that are still expected in this price range. Again, you’ll get used to it.

The buttons and ports around the edges of the phone are pretty standard. You’ll get a power button and volume rocker on the right side, a SIM and MicroSD card slot on the left, and a USB-C port on the bottom. There’s also a headphone jack on the top, which is nice to see in a world where higher-quality wired consumer audio is disappearing.

The back of the phone is pretty sleek and stylish, too. You’ll get a vertically-aligned triple-lens camera on the top left, along with a fingerprint sensor near the top. I have relatively large hands, but the sensor felt comfortable to use for me and seemed well-placed for naturally unlocking the device.

The back of the device is largely built from plastic, but it generally felt solid despite that. It’s definitely not as premium-feeling as much more expensive phones like the iPhone 11 Pro or OnePlus 8, but again, that’s expected for a phone in the price range, and the phone still feels nice in my hand. The device in general currently only comes in one color — Pear White. It doesn’t look bad, but more color options would have been nice.

The display on the phone does the job, but it’s not great. The 6.4-inch display is an LCD display with a 720p resolution, and you can definitely see slightly jagged edges on fonts and interface elements if you look for them. The slightly more expensive Moto G Power has a 1,080p display, making the 720p panel on the G Fast a little rough — but again, it does the job as long as you don’t expect much. It can get bright enough for most use, and it’s brighter than the $150 Moto E.

The Moto G Fast comes equipped with a Qualcomm Snapdragon 665 processor, coupled with 3GB of RAM and 32GB of storage. Thankfully, there’s also a MicroSD card slot built into the phone, so you can expand upon that storage if you so choose. The fact it has the same processor as the Moto G Power is good news — and it helps ensure that the device punches above its weight in performance.

In day to day use, the phone’s performance is great. The phone easily handled basic multitasking without slowing down too much, plus it can handle basic gaming too. It certainly doesn’t load as fast as more expensive phones, but playing Call of Duty: Mobile and Asphalt 9 worked pretty well.

Here’s a quick rundown of a few benchmark results that we achieved:

In general, these are good scores for a phone in this price range. In fact, these scores match the Samsung Galaxy A51, which is double the price of the Moto G Fast.

The Moto G Fast offers a 4,000mAh battery, and it’s solid. I was easily able to get through a full day of normal use, and by the end of the day, I still had 43% left. If you’re conservative in how you use your phone, you may be able to get two days of use out of it.

The Moto G Fast comes equipped with a triple-lens rear-facing camera, with one 16-megapixel main sensor, one 8-megapixel ultra-wide sensor, and one 2-megapixel macro sensor. Around the front, you’ll get an 8-megapixel camera.

The rear-facing camera is able to take decent photos in well-lit environments, with relatively bright colors and solid details. The ultra-wide camera isn’t the best out there, but it definitely adds versatility to the phone’s camera, and it’s a feature that you don’t normally get on phones in this price range.

Without good lighting, however, you’re a little out of luck. The phone can capture better photos than the also-new Moto E, but that’s not a high bar to jump — and if you find yourself without enough light, don’t expect to get anything of quality.

The phone also comes with a 2-megapixel macro lens, and it’s pretty lackluster. There seems to be a trend of including macro lenses on phones of all price ranges these days, however, the problem is that most of the time the macro lenses are low-quality. That’s especially true here. If you do find yourself taking a close-up shot of a small object, which I almost never do, you’ll likely end up with something relatively low-quality.

The front-facing camera on the phone is fine, but the colors aren’t as deep as they could be, and detail isn’t great. It’ll do the job for standard selfies, but don’t expect much more than that.

Generally speaking, this is not a phone you should buy for the camera. That said, for a phone in this price range the camera isn’t bad — and it’s a whole lot better than what you would have gotten just a few short years ago.

The Motorola Moto G Fast comes with Motorola’s new Android skin, My UX. Thankfully, My UX is based on Android 10, and is very close to stock Android, with only a few small tweaks to allow for a few customizations and gestures.

For example, you’ll get Moto Actions, which allow you to easily access certain features. These are pretty handy. You can take a screenshot by tapping the display with three fingers, or you can pick the phone up to silence the ringer. Some of these actions are enabled by default while others have to be turned on, and they’re worth taking a look at.

While My UX is based on stock Android, it’s possible Motorola will diverge a little more over time — and it’s currently unclear if and when the device will get Android 11. Motorola has been good at adopting Android updates in the past, so we’ll have to wait and see if that remains true now that there’s a new label for its skin in the mix.

The Moto G Fast comes at $200, which is an excellent price for a phone with these features. Sure, it won’t compare with more expensive devices, but if you have a $200 budget, the Moto G Fast is the way to go. If you can stretch a little, the Moto G Power may be worth considering, with its better display and bigger battery. But if you don’t care about those features, or don’t have the money, you’ll be happy with the Moto G Fast.

The phone comes with Motorola’s limited one-year warranty, which pretty much only covers manufacturer defects. You’ll want to make sure to take care of this phone.

The Moto G Fast is available straight from the Motorola website.

The Motorola Moto G Fast isn’t perfect, but in my view, it’s the best you’re going to get in this price range. It has a modern design and excellent performance in this price range, plus a solid battery — and the latter two are extremely important to consider if you’re buying a budget phone.

There are better options if you can spend more money, but if your budget maxes out at $200, the Moto G Fast is your best bet. If you can stretch your budget another $200, then it’s worth considering the iPhone SE, which is the best-performing phone for $400 or under. If you’re more of an Android fan, then it’s worth considering the Google Pixel 3a, or the Samsung Galaxy A51, which you might be able to find for $300 if you look for it. Alternatively, you could wait for the Google Pixel 4a, which may be released soon.

The Moto G Fast is made from plastic, which means that it will likely survive drops better than a glass device. That said, it isn’t water-resistant, so so keep it away from the bath or the pool.

Motorola has a decent track record when it comes to software updates, but considering the price range here, it’s anyone’s guess as to how many updates you’ll get, or when you’ll get them. Under normal use, you should be able to get two years out of the phone.

Yes, but only if your budget is $200 or less. If you can afford to spend a little more, it’s worth doing so.