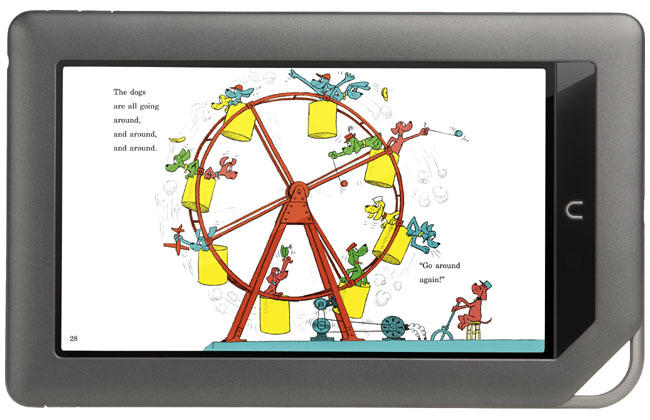 Barnes & Noble revealed this week that it plans to release a new version of its Nook e-book reader on May 24, the Wall Street Journal reports. The news comes via a filing from the company with the US Securities and Exchange Commission.

Reports of the new e-reader closely follows news that Barnes & Noble has upgraded its Nook Color e-reader with Google’s Android 2.2 “Froyo” mobile operating system. This update converts the Nook Color from a standard e-reader into a device with functionality more on par with Apple’s iPad and iPad 2 tablets, though at a considerably lower price — and considerably less processing power. (As Apple critics are sure to point out, Android-powered Nook Color units can also run Adobe Flash, while Apple’s iOS devices cannot.)

Barnes & Noble has so far withheld concrete details on the new Nook device, so there are few specifications we can report. According to speculation from WSJ, however, it’s possible that Barnes & Noble “will release a more powerful combination tablet and e-reader, perhaps running a more advanced software like Google’s Honeycomb software,” the third-generation OS used on Android tablets like the Motorola Xoom.

So far, most iPad competitors have had trouble breaking into that market, which Apple currently holds in a vice-like grip. Fortunately for Barnes & Noble, the e-reader market, which is led by Amazon’s line of Kindle e-readers, has been more receptive to competition. Because of this, other industry watchers believe that the new B&N e-reader will be an inexpensive device that more directly competes with Amazon’s Kindles. In other words, a Wi-Fi-only Nook with e-ink technology that costs about $100.

Either way, the new Nook will be here in just a few weeks, at which time we’ll have a better idea of where Barnes & Noble plans to take its e-reader line, and which company it will have to compete with most for business.

Topics
Video-editing app LumaFusion to get a Galaxy Tab S8 launch
Why a Kindle Paperwhite is the best $100 you can spend on Cyber Monday
Amazon’s new Kindle Scribe turns the e-reader into the ultimate notepad
Your guide to the best e-book readers for 2022
What is an eSIM? Here’s everything you need to know
The best iPhone apps in 2023: 50+ apps you need to download now
The iPhone 15 Pro’s rumored new design is one I can’t wait for
The best folding phones in 2023: our 6 favorite foldables right now
You can finally take ECGs and track AFib on a Garmin smartwatch
I bought a $50 Apple Watch Ultra clone, and it blew me away
Best cheap phones in 2023: our 5 favorite ones for tight budgets
How to get Apple’s Black History Month 2023 wallpapers for your iPhone and Apple Watch
Yes, we really are completely spoiling the OnePlus 11 and Buds Pro 2 launch