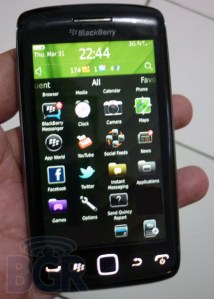 A wealth of new details has emerged about Research In Motion’s alleged next-generation touchscreen handset in a hands-on courtesy of BGR. The device, code-named “Monaco” and “Monza,” appears to be a vast improvement over RIM’s first touch-only device, the BlackBerry Storm.

The different code names are said to correspond with two different versions of the device, one for the Verizon Wireless CDMA network (Monaco) and another (Monza) for the global GSM model.

The updated OS version is quite similar to version 6.0, says BGR, with the most major difference with 6.1 residing with how the device handles syncing. Rather than require users to type in a numeric PIN code, BlackBerry Touch users will be asked to set up a BlackBerry ID that will be used to log into the BlackBerry network.

According to Electronista, the new OS will bear a “strong resemblance” to Google’s Android OS, and will likely be connected to the BlackBerry Project, which provides backup support as well as a tracking service for lost phones.

The BlackBerry Touch is said to come come loaded with a 1.2GHz processor and sport a 480×800 screen, which is larger and more crisp-looking than previous RIM touchscreen handsets.

In addition to the Touch, RIM is allegedly planning to release three other new devices in 2011: The BlackBerry Bold Touch, BlackBerry Curve Touch and the BlackBerry Tourch 2. The Touch device is said to hit stores sometime in May.

Video-editing app LumaFusion to get a Galaxy Tab S8 launch
The best tablets for kids in 2022: Fire HD, iPads, and more
Apple AirPods Pro 2 vs. AirPods Pro: What’s new?
The first Galaxy S23 Ultra leak is great news for S22 Ultra fans
Latest Google Pixel 7 leak reveals the full design in all of its glory
Nreal’s Air AR glasses head to the U.S., ready to rock with iPhones
The best ad-blocking apps for Android in 2022
Google wants you to know Android apps aren’t just for phones anymore
I have a confession — I may have been wrong about the Apple Watch Ultra
The best Samsung Galaxy Watch 4 screen protectors
Can’t stand using Instagram in 2022? This app fixes everything you hate about it
Apple AirPods Pro 2 vs. Google Pixel Buds Pro
These 80+ apps could be running adware on your iPhone or Android device