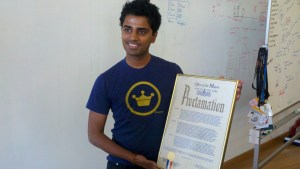 New York City Mayor Michael Bloomberg announced today that April 16, this coming Saturday, will officially be known as “Foursquare Day.” The tech-centric declaration comes amidst a major push by the mayor to establish New York as the Silicon Valley of the East Coast.

The city says it chose Foursquare because the popular location-sharing service was founded by Dennis Crowley and Naveen Selvadurai in the East Village neighborhood of Manhattan. Why April 16, you ask? Well, because four squared equals 16, of course!

“[Foursquare] now employs more than 60 people in New York and has more than eight million users worldwide,” says the Mayor’s Office on its website. “That is why we are proud to join Foursquare’s founders and fans in celebrating the first global social media holiday.”

New York City is one of at least 12 US cities to have signed on to Foursquare Day. Those cities include places like Atlanta, GA, Austin, TX, Cincinnati, OH, and Miami, FL. Outside the US, Victoria, British Columbia in Canada and Ramat-Hasharon, Israel will be joining in on the festivities as well.

The Mayors office says that Foursquare isn’t just a fun app, it’s also helps business, like restaurants, coffee shops and other retail outlets do business, since Foursquare users return often in an attempt to be come “mayor” of that particular business location.

Bloomberg has been on a quest to make NYC as attractive to start-ups and tech entrepreneurs as possible. Recently, the city government opened up the its massive reservoir of data to app developers, who created software using the information as part of the NYC BigApps 2.0 annual data competition.

“There is no better place than New York City to start a business,” says the Mayor’s Office. “We are the most exciting and most dynamic place on the planet, an international capital of the arts, fashion, and finance…With Foursquare leading the way, we look forward to this generation’s innovators and entrepreneurs making their mark on our City in the years to come.”

For a full list of Foursquare Day parties, check out Meetup.com here.

Video-editing app LumaFusion to get a Galaxy Tab S8 launch
The secret to helping older people get online is right in front of us
How to record phone calls on your iPhone quickly and easily
How Apple can fix iOS 16’s messy lock screen customization in iOS 17
Your iPhone may be collecting more personal data than you realize
The best dating apps for 2023
The best webcams for 2023
The best USB-C headphone adapters for 2023
The best tablets for seniors for 2023
The best iPad keyboards for 2023
Is the Samsung Galaxy A14 5G waterproof?
The best fitness trackers in 2023: our 10 favorite picks
Watch the Galaxy S23 Ultra get unboxed a week before launch